Here’s a newsflash for progressives who think the Russians undermined the 2016 election via social media: Your obsession with identity politics did a lot of the work.

Judging from new (and old) reports about Russia’s propaganda campaign, it seems that Moscow put the most effort into stoking discontent among identity-mad leftists in hopes that they would turn away from the political process and not vote. Progressives divided. Moscow conquered.

Kevin Roose writes in the New York Times, “Many of the Russian [Instagram] posts focused on developing audiences among specific American identity groups, which could then be used to target them with content and advertising later on.” He goes on: “Several of the I.R.A.’s [Russia’s Internet Research Agency] most popular Instagram accounts focused on African-American themes and interests.”

There’s reason to doubt that feeding more silly memes into the bottomless swamp of web-image activism had any real effect on the outcome of the election. But if you believe it did, that’s how it was done.

Yes, the Russian effort also targeted whites and Christians as groups, hoping presumably to corral them into the pro-Trump camp. But that’s not where the bulk of the investment was. As Scott Shane and Sheera Frenkel write about a Senate Intelligence Committee report on the matter:

The report says that while “other distinct ethnic and religious groups were the focus of one or two Facebook Pages or Instagram accounts, the black community was targeted extensively with dozens.” In some cases, Facebook ads were targeted at users who had shown interest in particular topics, including black history, the Black Panther Party and Malcolm X. The most popular of the Russian Instagram accounts was @blackstagram, with 303,663 followers.

The Russians did the same thing with their Facebook ads, creating fake minority-group pages and posting catchy slogans about disenfranchisement and American injustice. The campaign targeted other demographics associated with the left, such as feminists and the LGBTQ community. One Russian Facebook creation “LGBT United,” put up posts with messages saying things like “One Struggle, Stick Together.” There was also Native Americans United, which rehearsed Native American charges against the U.S. government and “racist Americans.”

The Russians exploited progressives’ preoccupation with identity and weaponized it against the left. They played on the divisions inherent in the politics of race and gender to exacerbate feelings of hopelessness among potential Democratic voters. It makes sense that Russia homed in on the identity left. Progressives were the easiest, most willing marks they could find.

People like to call the Russian campaign an act of war, so think of it in terms of actual combat. If you march into enemy territory and find the opposing troops divided into warring tribes with no common purpose, you barely have to fight. The more the left focuses on differences and grudges and accidents of birth, the easier it is for America’s antagonists to get the better of us. This is part of what conservatives mean when they say that identity politics is bad for the country. It weakens us in every way.

Vladimir Putin isn’t alone in repurposing the left’s identity woes to attack us. Former Iranian president Mahmoud Ahmadinejad now uses Twitter to parrot the slogans of Black Lives Matter. And there was a time when Osama Bin Laden would give interviews and repeat the anti-American claims made in Michael Moore propaganda films. The left can be a great source of opposition research for those who’d like to do our country harm.

Liberals often say that conservatives have been complicit in Vladimir Putin’s supposed attack on our democracy. But it’s those on the political left who’ve made themselves the fierce, if unwitting, frontline soldiers in Russia’s campaign against a united America. You might call them Putin’s puppets. 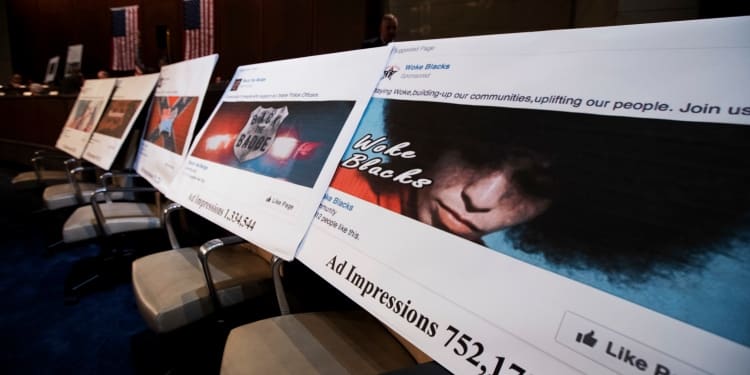