Back in our cheery, prelapsarian days—2016, to be exact—a young and photogenic NFL quarterback named Colin Kaepernick chose to express his patriotism by kneeling whenever the National Anthem was played before football games. He kneeled, you see, merely to protest police mistreatment of African Americans. And we knew that Kaepernick actually loved America because he told us so. “I’m not anti-America,” he said. “I love America…. I think having these conversations helps everybody have a better understanding of where everybody is coming from.”

And everyone bought it. Oh, how they loved to love Kaepernick’s love. “Colin Kaepernick Reminds Us that Dissent Is a Form of Patriotism Too,” read the Washington Post headline affixed to Sally Jenkins’s column on the matter. Also in the Washington Post, NBA legend Kareem Abdul-Jabbar weighed in to say that Kaepernick was conducting himself “in a highly patriotic manner that should make all Americans proud.” At ESPN, Ian O’Connor’s contribution “You Can Knock Colin Kaepernick—Don’t Call Him Un-American,” offered this: “They say football builds character. In America, we should celebrate the fact that Colin Kaepernick just revealed his.”

If you didn’t understand how taking a knee for the National Anthem showed supreme love of country, maybe you needed to acquaint yourself better with the nuances of the truly patriotic mind. So Psychology Today got in on the act. Headline: “Colin Kaepernick’s Protest is as Patriotic as Apple Pie.” Another Psychology Today column, titled “Why Colin Kaepernick Is a Patriot,” explained that “the act of defiance that Kaepernick engaged in actually embodies a specific type of patriotism: that of constructive allegiance to one’s nation.”

Allegiance to one’s nation! This July 4, Kaepernick tweeted out his thoughts on such allegiance: “Black ppl have been dehumanized, brutalized, criminalized + terrorized by America for centuries, & are expected to join your commemoration of ‘independence’, while you enslaved our ancestors. We reject your celebration of white supremacy & look forward to liberation for all.”

No one buys Kaepernick’s love of country any more. But that works out fine because he’s no longer selling it. In 2016, you still had to dilute your anti-Americanism with a drop of patriotism to get the really good press. That’s over with.

Today, the American media market rewards the pure stuff, the straight-up hatred of the United States. Which is why on July 6, Kaepernick announced his new partnership with The Walt Disney Co. to produce scripted and unscripted content about, presumably, the country that has been so terrible to Kaepernick (and Disney).

Of course, all those 2016 Kaepernick defenders really believed and approved of his claims to patriotism. Just as today, they believe and undoubtedly approve of his undiluted anti-Americanism. You’d think that they feel duped, but you’d be wrong; they’re appreciative. No one on the left is dropping Kaepernick. In coming out as a full-throated anti-American, he helped his woke supporters shed their habit of white supremacy. He once had to play the game of good citizenship, but his liberation from those restraints is their liberation, too. Where he leads, they’ll follow. What he rejects, they’ll reject. And whatever cognitive dissonance arises will be chalked up to past ignorance. This holds true not just for Kaepernick but for all social-justice celebrities. Indeed, it applies to social justice generally. Whatever is done or said in the name of the cause is good and just. Fool them once, fool them forever. 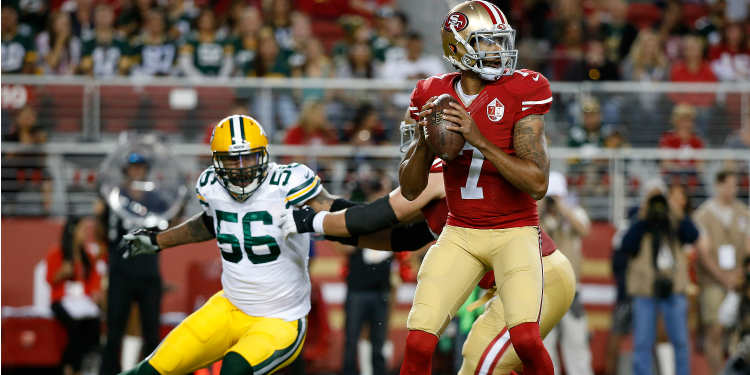