After a weekend of anti-Semitic horror, there was soul-searching and finger-pointing.

The New York Times reflected on its anti-Israel obsession, expressed heartfelt regret for publishing an offensive cartoon about Benjamin Netanyahu, and then published, from what I can tell, another one.

The pointed fingers were aimed at Donald Trump and the bigotry engendered by his supporters—even though the suspected shooter in Saturday’s attack at the Chabad of Poway synagogue opposes Trump specifically because the president has been so good to Israel. So much for the reckoning.

These moments of reflection aren’t about rooting out anti-Semitism. They’re about saving rotten reputations and the political uses of tragedy. Which is why we hear virtually nothing about one particular mode of violent Jew-hatred that’s on the rise: anti-Semitism in African-American communities.

Much of this has taken place in the Crown Heights section of Brooklyn. According to the NYPD, assault and robberies on Jews in Crown Heights went from two in 2017 to 10 in 2018. The attackers tend to be African-American, and they sometimes yell out anti-Semitic slurs. There have been at least three such attacks so far this year. You can see a lot of this violence in recovered surveillance footage, but not much of it makes it to the front pages of major newspapers.

And it’s not just happening in Crown Heights. On Tuesday morning, Rabbi Uriel Vigler was heading to his synagogue on the Upper East Side of Manhattan when he was accosted by a black man calling him a “f***ing Jew” and “the devil.” The man fled when he saw a security guard. Vigler captured some of the aftermath on video.

There are still other reasons that black-on-Jewish hate crime is largely ignored: Democrats would rather not speak of it because they’re hyper-sensitive about offending African-American voters (and not too worried about losing Jewish ones). Some on the left are so frightened to address this kind of anti-Semitism that they’ve decided it isn’t anti-Semitism at all. An article in the Forward last December more-or-less chalked it all up to the effects of gentrification. And if Republicans bring it up, they’ll immediately be called racists, as they are when they point out Rep. Ilhan Omar’s anti-Semitism.

Meanwhile, everyone’s favorite new moderate, Pete Buttigieg, just earned his official Democratic presidential-candidate badge by going up to Harlem to get the nod from the mellowing elder statesman of black anti-Semitism, Al Sharpton. Any genuine reflection on the left would surely end the ritual of seeking blessings from a man who said, in in the wake of a murderous pogrom in 1991,  “If the Jews want to get it on, tell them to pin their yarmulkes back and come over to my house.” But Democrats still stand in line every four years to kiss his ring.

Sharpton’s public rehabilitation consisted of his losing weight, buying fancy suits, and never apologizing. And why would he apologize? With reasonable people afraid to talk about black anti-Semitism, the only ones left to weigh in are the actual bigots. They fear nothing. They own the space. 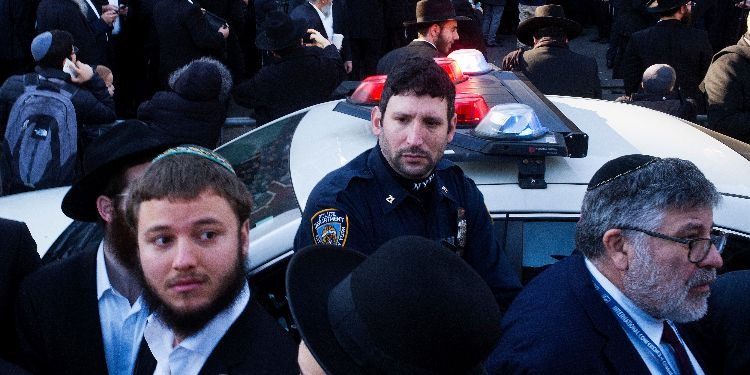