For the past few years, climate-change activism has shifted its focus from the potential dangers of climate change to the present threat of “climate crisis.” If the idea was to scare people into facing the problem squarely, it’s working. But not in the way activists had hoped.

Some on the left are so convinced by claims of flood, drought, and fire that they now deem the problem unsolvable. Of course, if all the doomsday tales were actually true, then these climate-change depressives would be dead right. Lucky for all of us, they’ve merely been taken in by a publicity campaign gone wild.

The novelist Jonathan Franzen just wrote an entire essay in the New Yorker making the case that it’s too late to do anything about climate change. “Even at this late date, expressions of unrealistic hope continue to abound,” he writes. “Hardly a day seems to pass without my reading that it’s time to ‘roll up our sleeves’ and ‘save the planet’; that the problem of climate change can be ‘solved’ if we summon the collective will. Although this message was probably still true in 1988, when the science became fully clear, we’ve emitted as much atmospheric carbon in the past thirty years as we did in the previous two centuries of industrialization.” Franzen notes that the earth has warmed past the predicted doomsday level, so we’re, literally, sunk.

Not to worry. Franzen is a pragmatic apocalyptic: “If you accept the reality that the planet will soon overheat to the point of threatening civilization, there’s a whole lot more you should be doing.” Naturally, he’s got his own ideas about to how to prepare for the big melt. A lot of it involves being nice. “Kindness to neighbors and respect for the land—nurturing healthy soil, wisely managing water, caring for pollinators—will be essential in a crisis and in whatever society survives it,” he writes.

A recent article in the Washington Post by Chris Mooney and John Muysken also suggests we’re past the point of no return: “Numerous locations around the globe…have warmed by at least 2 degrees Celsius over the past century,” Mooney and Muysken write. “That’s a number that scientists and policymakers have identified as a red line if the planet is to avoid catastrophic and irreversible consequences. But in regions large and small, that point has already been reached.”

Apparently, Democratic presidential candidate Andrew Yang agrees. “This is going to be a tough truth, but we are too late,” he said during CNN’s climate town hall. “We need to do everything we can to start moving the climate in the right direction, but we also need to start moving our people to higher ground.”

If you’re on the left, this won’t do. The political, economic, academic juggernaut that is climate-change activism depends on there being both an imminent climate catastrophe and a just-out-of-reach solution in perpetuity.

Franzen’s essay got a lot of attention, so climate scientists are now trying to tear it apart. One example is particularly telling: “Franzen’s odd insistence that 2 degrees is a magic # and everything turns instantly to hell after that. That’s nuts,” tweeted sustainability guru Andrew Winston. “If we miss 2, we fight for 2.1, then 2.2, etc.”

This gets to the climate-change depressives’ great mistake: They didn’t get the memo. If you care about global warming, you’re not supposed to take the science as science. You’re supposed to take it as “science,” a newly minted political term that means “that which allows one to ignore conservative opinion at a given moment in time.” You’re never supposed to use “science” as a means of getting at the objective truth. In 21st-century partisan warfare, objective truth is a deadly burden.

Franzen and the others, poor souls, they thought it was all real. But 2 degrees Celsius doesn’t really mean 2 degrees Celsius. It means 2.1 or 2.2 or whatever’s politically feasible at the moment that you’re called on to say something scary. When Al Gore said, in 2006, that we had 10 years to cut greenhouse-gas emissions or face certain catastrophe, he didn’t mean 10 years; he meant “10 years.” When he said, a year later, that the Arctic sea ice could disappear by 2013, he didn’t mean 2013; he meant “2013.” And so on.

The science isn’t settled. It’s “settled,” which means adjustable as needed for political expediency. To believe in science is to deny “science.” 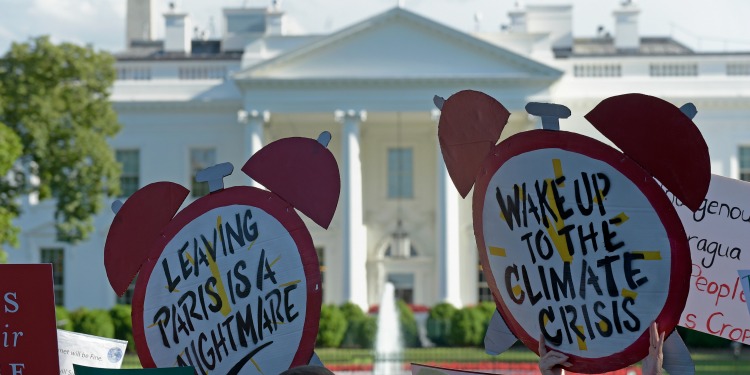