Nearly a month after Hillary Clinton lost the presidential election, her advisors still refuse to concede that the candidate herself, and her advisors, bear responsibility for the loss. Instead, they blame on James Comey, the Russians, and the millions of people who voted against Hillary for deplorable reasons unrelated to the candidate’s own merits. It requires—to borrow one of Hillary’s own old lines—the willing suspension of disbelief.

steadfastly refused to admit any specific fault, as Clinton media strategist Mandy Grunwald noted multiple times that any one person’s diagnosis of the ultimate problem was likely correct in a race so close.

But they didn’t hesitate to point to “headwinds” that disadvantaged Clinton…Mook identified the WikiLeaks releases of campaign chairman John Podesta’s emails and Comey’s letters as the two points that they never anticipated, but he repeatedly declined to go in depth into his campaign’s shortcomings.

“No one of those emails that was put out, no one day of that, was a game-changer in the race, however it was a low-grade fever throughout, and that was an enormous strategic disadvantage,” he said. “If you ask me what was the single greatest headwind we had in the race, it was the two letters from James Comey.”

Of course, that’s not true. Whatever problems Comey, Wikileaks, and others caused for Hillary Clinton’s campaign, the campaign’s greatest problem was the candidate herself, one of the two least appealing presidential candidates in a century.

One can forgive Hillary for not recognizing (or admitting) her own faults. But her staff’s reaction calls to mind an episode from the very beginning of her national political career, recounted in George Stephanopolous’s 1999 memoir, All Too Human.

On the campaign trail in 1992, Bill Clinton campaign’s staff (including Stephanopolous) reviewed focus-group data. Participants had been asked to register scores on handheld meters as news footage appeared onscreen. Stephanopolous and the others could see the scores displayed on the screen in real time, giving them an instant account of the voters’ responses.

And, in this case, the results were ugly: “When a shot of Hillary speaking was played,” he writes, “the line on the screen dropped like a downhill ski run.”

The voters’ reactions to Hillary, however, were much less telling than her husband’s reaction:

“Oh man,” Bill Clinton reacted. “They don’t like her hair.”

It was a delusional (if well-meaning) reaction, and Stephanopolous and James Carville knew it:

Nobody said a word, but James—who was sitting next to me on the couch across from Clinton—started grinding his fist into my thigh. That pressure and the laughter building up inside me made me double over until James mumbled something and burst out of the room. I was right behind him. We collapsed in hysterics the second we hit the corridor. From then on, whenever I wanted to make James laugh, all I had to say was “They don’t like her hair.” To him, it was the single most memorable line of the campaign.

A quarter-century later, Hillary Clinton has hardly changed. But the advisors surrounding her evidently had. Carville and Stephanopolous were able to see her clearly, for better and for worse; they didn’t pretend that her unpopularity owed to anything other than the things she said and the way she said them. Maybe that’s why Bill Clinton’s advisers won two presidential elections for him, while the main achievement of Hillary Clinton’s advisors this year was shouting down Kellyanne Conway in a Harvard auditorium. 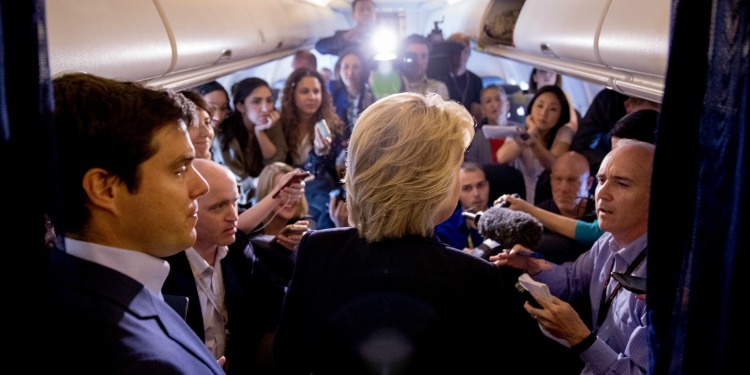 Adam J. White is a senior fellow at the American Enterprise Institute and co-director of George Mason University’s C. Boyden Gray Center for the Study of the Administrative State.