For nearly two years, President Trump’s critics placed immense weight on Special Counsel Mueller’s investigation of allegations that Candidate Trump colluded with Russia before the 2016 election, and that President Trump obstructed justice after his 2017 inauguration. So, in the immediate aftermath of Mueller’s investigation and Attorney General Barr’s brief summary to Congress, it is more than a little ironic to find President Trump’s critics now downplaying Mueller’s conclusions that there is no evidence that Trump colluded, and insufficient evidence that Trump obstructed justice.

I pointed this out in Politico’s insta-symposium on Attorney General Barr’s description of the Mueller Report: “For two years, too many of the president’s supporters did not take the special counsel seriously enough. It would be ironic if the president’s critics now make the same mistake.”

We should all take seriously the fact that Special Counsel Mueller declined to recommend indictments—indeed, declined even to subpoena President Trump to testify as to his intent in firing James Comey or in other actions that could possibly have constituted obstruction of justice. For all the weight that the President’s critics will place upon the fact that Mueller identified some facts that could be seen as evidence of obstruction, and the fact that Mueller went out of his way to specify that his report “does not exonerate” Trump, the fact remains that Mueller himself ultimately found not only that there was no evidence of Trump-Russia collusion, but also that there was insufficient evidence that Trump obstructed justice.

And now, as the country continues to grapple with the Mueller endgame, it is worth noting two further ironies:

First, it is ironic to find the President’s critics now demanding not only that the Mueller Report be released in full, but also that Mueller himself testify before Congress.

For two years, the President’s critics have complained that Trump and his political appointees would break the Justice Department’s institutional rules and traditions for the sake of Republican political advantage. In the end, any attempts by Trump to do so failed; the investigation was completed successfully and legitimately.

But now the President’s critics are the ones demanding that the Justice Department bend to their own will. They want Mueller to testify, even though Justice Department regulations and policies tightly limit current and former DOJ officials can disclose about closed investigations (and the Federal Rules of Criminal Procedure also require Mueller to keep grand jury proceedings confidential). The Justice Department preserved its institutional legitimacy and the rule of law against President Trump’s political pressure; it should resist the Democrats’ political pressure with just as much vigor.

The second irony is found in Mueller’s own statement, as quoted by Attorney General Barr, that “while this report does not conclude that the President committed a crime, it also does not exonerate him.”

The President’s critics trumpeted this half-damning statement so quickly that they may not have noticed its familiar ring. In July 2016, when then-FBI Director James Comey announced that the Justice Department would not indict Hillary Clinton for her handling of confidential State Department materials, he included a similar statement half-damning Clinton for her conduct: “Although we did not find clear evidence that Secretary Clinton or her colleagues intended to violate laws governing the handling of classified information, there is evidence that they were extremely careless in their handling of very sensitive, highly classified information.”

Comey’s statement sparked an outcry among Clinton’s supporters, who denounced Comey’s characterizations of conduct that did not rise to the level of indictment. For example: Matthew Miller, who served as Justice Department spokesman from 2009 to 2011, blasted Comey for uttering such a statement:

Some have praised Comey’s remarks as much-needed truth-telling from a fearless, independent law-enforcement authority, an outcome Comey no doubt had in mind. But in fact, his willingness to reprimand publicly a figure against whom he believes there is no basis for criminal charges should trouble anyone who believes in the rule of law and fundamental principles of fairness.

… And when the department closes an investigation, it typically does so quietly, at most noting that it has investigated the matter fully and decided not to bring charges.

These practices are important because of the role the Justice Department and FBI play in our system of justice. They are not the final adjudicators of the appropriateness of conduct for anyone they investigate. Instead, they build cases that they present in court, where their assertions are backed up by evidence that can be challenged by an opposing party and ultimately adjudicated by a judge or jury.

In a case where the government decides it will not submit its assertions to that sort of rigorous scrutiny by bringing charges, it has the responsibility to not besmirch someone’s reputation by lobbing accusations publicly instead. Prosecutors and agents have followed this precedent for years.

Clinton herself criticized Comey’s “extremely careless” line, in her 2017 memoir, as “completely unexpected and inappropriate.” She even quoted the document that President Trump invoked for firing Comey: Deputy Attorney General Rosenstein’s May 2017 memo finding that Comey’s statement “ignored [a] longstanding principle: we do not hold press conferences to release derogatory information about the subject of a declined criminal investigation.”

The common principle underlying these policies is that neither the FBI nor Department prosecutors are permitted to insinuate or allege that an individual who has not been charged with a crime is nevertheless guilty of some wrongdoing.

… We recognize that this investigation was subject to scrutiny not typical of the average criminal case, but that does not provide a basis for violating well-established Department norms and, essentially, “trashing” the subject of an investigation with uncharged misconduct that Comey, every agent, and every prosecutor agreed did not warrant prosecution. Such norms exist for important reasons and none of the justifications provided by witnesses for why such criticism was warranted in the [2016] investigation—including expressing disapproval of former Secretary Clinton’s conduct to the FBI workforce, “counter[ing]” statements made on the campaign trail that the emails in question were classified after the fact, or informing the American people about the facts of the investigation— provided legitimate reasons to depart from normal and appropriate Department practice. [Emphasis added]

In this case, Special Counsel Mueller’s own characterization of the President’s uncharged conduct did not repeat Comey’s error because he did not make his statement to the public. Rather, he included it in a confidential report to his Justice Department superiors. And that is precisely the point: when the President’s critics now begin to demand that Mueller come and discuss publicly his interpretation of facts which Mueller himself declined to make the basis of a recommendation to indict, they demand that Mueller commit precisely the same error that Comey infamously made. 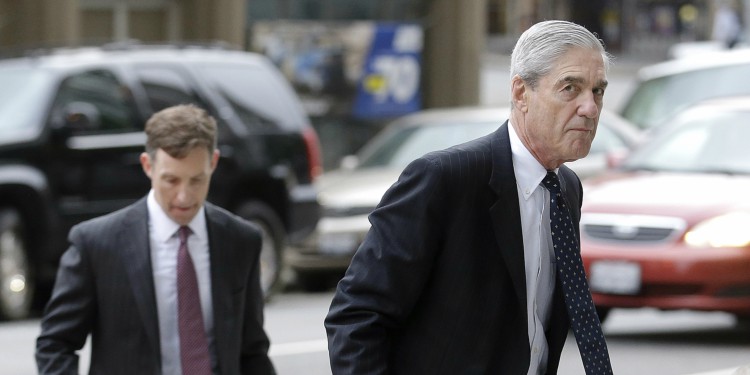