In November, President Donald Trump was asked by Fox News for his opinion on the pro-democracy, anti-Beijing protests in Hong Kong. “We have to stand with Hong Kong,” he said of the demonstrators who had adopted the American National Anthem as their own song of liberty. “But I’m also standing with President Xi.”

How could Trump stand simultaneously with oppressed and oppressor? Perhaps by following the example of his predecessor, President Barack Obama.

In the summer of 2009, hundreds of thousands of Iranians took to the streets to protest the faux-democratic reelection of Iran’s president, Mahmoud Ahmadinejad. The American president steered clear of commenting for a notably long period of time, even while Iranian protestors called out for his encouragement. Finally, Obama, a more polished equivocator than Trump, weighed in with these words for those in Iran’s Green Movement: “The world is watching and inspired by their participation, regardless of what the ultimate outcome of the election was.” Obama’s press secretary, Robert Gibbs, soon declared of Ahmadinejad, “He’s the elected leader.”

Similarly, when Trump decided to pull American troops out of northeastern Syria and allow a Turkish attack on our Kurdish allies, the precedent had been set by Obama, who failed to act when Bashar al-Assad’s campaign of slaughter in Syria began in 2011.

Defending the freedom of others and stopping murderous strongmen are not the only components of what’s come to be known as American exceptionalism, but they are instructive ones. To witness Democratic and Republican presidents offer only mealy-mouthed support for those fighting against repressive rule is to know that something has gone awry in our understanding of the American creed. And to see both presidents sit on their hands while innocents and allies are killed is to know that the republic has been deeply shaken by a loss of confidence in who we are. In the decade that unfolded between these bookends, we look back on a United States where both Democrats and Republicans decided that their country lacked the moral credibility to be a force for good in the world.

Since Alexis de Tocqueville’s Democracy in America (1835) and up until very recently, the phrase “American exceptionalism” has been understood not only, or even primarily, as a hierarchical concept—one that places the United States above all other countries—but as a descriptive one. America, for better or worse, is exceptional. We have the longest-running democracy in history. Even in Tocqueville’s time, our democracy was a wonder, having already proved more successful and stable than France’s. But America is exceptional in other ways. Unlike all other countries, with the late exception of the Soviet Union, we were founded on an idea, not on the basis of birthright or tribe. That idea—the flourishing of individual liberty—has given rise to a number of our unique characteristics: Americans have historically been fiercely protective of their freedoms, dismissive of social class, robustly patriotic but suspicious of government, anti-authoritarian, and pro-religion.

This has had ramifications for good and ill. Americans are more charitable than any other people on the planet, but we’re also more violent, and the United States has the highest per capita incarceration rate in the world. We offer more equality of opportunity than any other country, but fierce and open competition for success means that we are also the world’s most “overworked” people. Such contradictions are part of our uniqueness. And as Seymour Martin Lipset wrote in his 1996 book, American Exceptionalism: A Double-Edged Sword, “the greatness of free polities lies in their institutionalization of conflict, of the continued struggle for freer and more humanely decent societies.” On that score, the United States has not only been exceptional but exceptionally good. Our checks and balances, propensity for civil and lawful conflict resolution, and ongoing effort to define and refine political liberty remain models for every other nation. The country’s singular readiness to do good in the world when no one else will rests on our self-conception of America as the guiding star of human freedom.

Sadly, neither president is entirely out of step with his base. For a good portion of the liberal left, especially those in the media, the United States is exceptional but mostly in its capacity for cruelty and deception. The most extraordinary example of this is the New York Times’ “1619 Project.” Launched in August 2019, the project sought through a series of essays and articles to reframe the entire American founding as an unremarkable by-product of the slave trade. In this reading of U.S. history, claims of American virtue are mostly seen as patriotic window dressing meant to prettify the country’s otherwise ugly birth. By 2019, the 1619 Project was only the natural flowering of a decade of activism portraying American institutions as hopelessly racist and calling for reparations for the descendants of American slaves.

Also on the left, the past decade has seen the sapping of a traditional American strength that had long been part of the country’s exceptional nature: our imperviousness to socialism. Here the groundwork was laid by Obama but built on colossally by the Democratic Party he left in his wake. Obama spoke of wanting to “spread the wealth around” in order ameliorate the hardships of those Americans who hadn’t succeeded. He also effected a partial government takeover of the health-care industry. But it wasn’t until the 2016 presidential election elevated Vermont’s socialist senator, Bernie Sanders, into a folk superhero that socialism had openly broken into the political mainstream. Four years later, Sanders is once again a main contender to be the Democratic presidential nominee. His effect on the party is enormous and has pulled almost all the other Democratic candidates toward adopting a more sympathetic stance on socialist policies and rhetoric. The Sanders phenomenon has also inspired the popular success of the New York socialist congresswoman Alexandria Ocasio-Cortez. According to Gallup, “a majority of Democrats have said they view socialism positively in Gallup polling since 2010, including 57 percent in the most recent measure in 2018.”

Until the past decade, the U.S. was alone among major industrial nations in never having produced a large-scale socialist movement of any significant power. There is a rich literature on socialism’s historic weakness in the United States, and one of the most credible explanations for our outlier status is that America lacks the ingrained class resentment that had given birth to socialist movements everywhere from Russia to England. That explanation is applicable only so long as the American people continue to resist incitement to class warfare. But here, too, there’s been a change, and it explains why socialism is now a real player in our marketplace of ideas. In the past decade, class warfare has become a staple of our political rhetoric. Since the start of Obama’s first term in office, virtually every prominent Democratic politician in the country has come around to adopting income inequality as a key talking point or basis for legislation. From Obama’s complaints about the top 5 percent of income earners not paying their fair share to Elizabeth Warren’s proposed wealth tax, the demonization of the wealthy has been ubiquitous. Such sentiments are reflected in left-wing punditry and activism as well. This was the decade of “late capitalism” and Occupy Wall Street, ideas and movements that inspired visions of the demise of billionaires and assorted fat cats.

In this, American conservatives have also played a role. The new right-wing populism has taken up its own brand of class warfare. Deriding elites and the cruelties of capitalism, prominent conservative figures such as Fox News host Tucker Carlson have found common cause with the Sanders left in calling for a less-free market.

Still others on the right, such as First Things editor R.R. Reno, now attack free-market capitalism as having exacerbated a crisis of the American soul. “Thirty years after the end of communism, some voters haltingly recognize that our freedom must be directed toward enduring ends if it is to serve something higher than itself,” he writes. “And in our age, which has taken economics to be the key to almost everything, that intuition naturally comes into focus with calls for limits on economic freedom.” He goes on: “It is time, therefore, to set aside the notion that the problems we face in the West can be solved by stiffer doses of economic freedom.”

Reno’s dubious prescription aside, he is correct that there is a spiritual crisis in the United States. And this, too, speaks to a discernable turning away from our exceptional nature. The 2010s saw the rise of the “nones”—those Americans who don’t identify with any religious faith tradition. Americans have historically been more religious than citizens of other wealthy Western democracies. We have also been more likely to ascribe to a universal, as opposed to situational, morality and believe in both God and the Devil. While Americans are still more religious than other wealthy countries, we are becoming much less so. According to a General Social Survey, as of 2018, Americans claiming “no religion” (23.1 percent) are statistically equivalent in number to American evangelicals (22.8 percent). Decline in faith has been steepest among liberals and the left, and according to a 2018 Gallup poll, Democrats are now about as religious as the British general public.

Because the United States is a representative democracy, our leaders reflect public sentiment. If Obama and Trump have been cynical about American exceptionalism, their attitudes are only an approximation of the current state of affairs in our culture. A 2019 Gallup poll found American patriotism at record lows. The number of Americans who were proud of their country fell to 70 percent, a 10-point drop from a decade earlier. And fewer than half of all Americans (45 percent) said they were “extremely proud” of their country. A partisan breakdown shows that among Republicans, 76 percent were extremely proud of the U.S., while only 22 percent of Democrats said the same. But perhaps most telling is that fewer than half of Democrats (22 percent) and Republicans (45 percent) claimed to have any pride in our political system.

As we forget how to think about and speak about American exceptionalism, we may also fail to safeguard it and, in time, lose our connection to it altogether. In 1955, the historian Richard Hofstadter wrote of the United States: “It has been our fate as a nation not to have ideologies, but to be one.” But that notion seems quite alien in 2020. Our politicized nation is now convulsed with ideologies. Public opinion continues to fracture into capitalism, socialism, religion, atheism, and so on. American exceptionalism seems barely discernible in the mix. 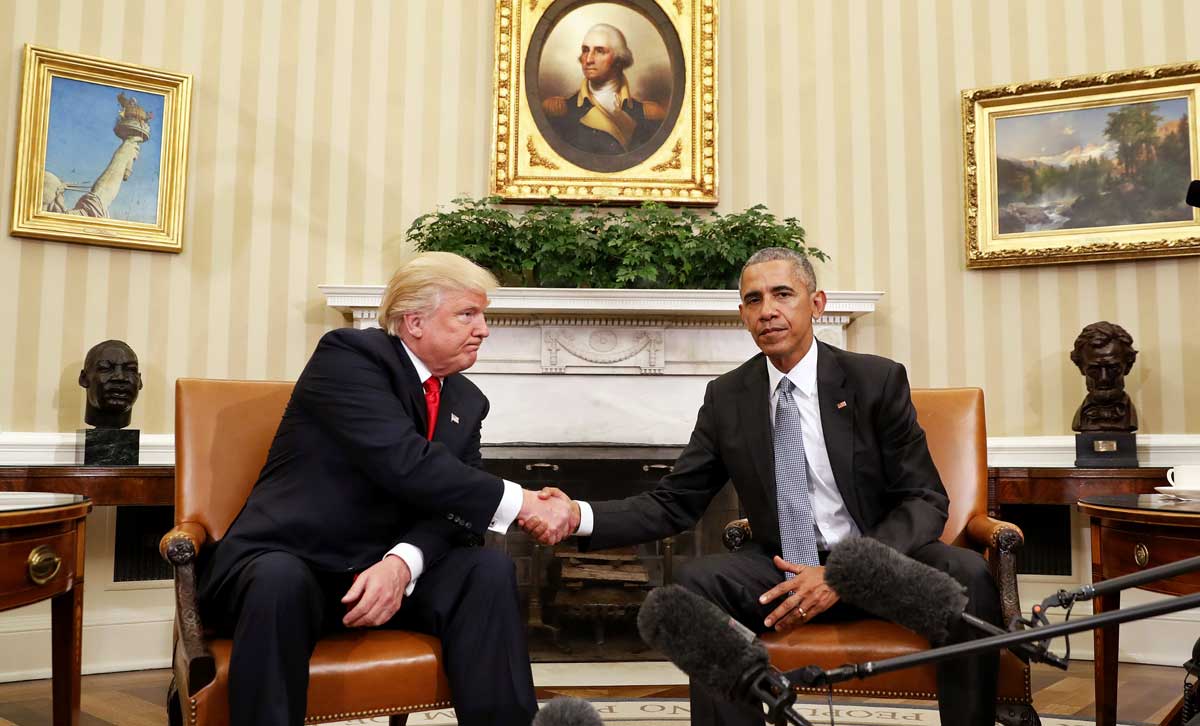