You can’t judge a book by its cover, so we’re told. You can sometimes judge a book by its title, however, and, further, you can often judge presidential candidates by the book they pay a ghostwriter to write and then release as a herald of their noble ambitions. I’m not making a grand claim when I say that the best part of the new book by Howard Schultz, founder of Starbucks Corporation and momentary presidential candidate, is the subtitle. Have a little fun with that; it’s all the fun you’re going to get.

The main title itself is failed wordplay: From the Ground Up. I’m assuming it’s partly an allusion to Schultz’s professed belief that political progress is generated from ordinary citizens upward to their elected representatives. It alludes also to Schultz’s life story as a kid from a public housing project in Canarsie who through pluck and ingenuity grew into a much-praised billionaire and “self-made person,” as he describes himself.

Yet the publishers clearly wanted to trade as well on Schultz’s fame as a dispenser of coffee, as earlier publishers did with his memoir Pour Your Heart into It. This would have required From the Ground(s) Up, which doesn’t have any single, much less a double, meaning, though it does conjure unpleasant images of damp filters soiled with the dregs of Breakfast Blend tossed in a garbage bin next to the rinds of exhausted grapefruit. Not presidential material, in other words.

Once you puzzle through the title, you arrive at the subtitle, and it’s here that you really find clues to Howard Schultz’s capacity as a politician and future statesman. The subtitle is A Journey to Reimagine the Promise of America—a word salad impressive in its high-sounding banality.

When I got bored reading From the Ground Up, which happened with discouraging frequency, I would turn to the cover and pretend the subtitle was a game of Mad Libs, where you can just jumble the words in any order you please.

And speaking of mad libs, there were lots of them when Schultz announced his intention to run for president. (I could win a Pulitzer just for my transitions.) Schultz is himself a liberal and for decades has been a generous donor to Democratic politicians. Even so, the entire party seemed to erupt as one in revulsion at the thought of his running as an independent. Julian Castro, a former secretary of Housing and Urban Development and, as night follows day, a candidate for the Democratic presidential nomination, said that Schultz “would provide Trump with his best chance of being reelected” by splitting the anti-Trump bund. “If Howard Schultz goes through with this half-baked idea,” declared Dan Pfeiffer, one-time Obama mouthpiece, “he will pose an existential threat to a Democrat.” Every other political professional not yet hired by Schultz agreed.

The same mixture of alarm and revulsion was found in the mainstream, left-leaning press. The website Daily Beast seemed particularly upset. Among its scoops was a report that Schultz has “a tricky history dealing with race issues.” Tricky? It’s downright problematic! One of the site’s earnest young Jimmy Olsens shuffled through the 262 record albums that Starbucks stores sold over a 20-year period and discovered they were “painfully white.”

As it happens, a large majority of the records were compilations that featured a racially mixed grab bag of musicians. This is not good enough for the melanin trackers at the Beast. “The single-artist albums”—which young Jimmy failed to note were a small percentage of the releases—“are overwhelmingly from white musicians, according to a review by The Daily Beast.” How white? Think Paul Simon. Think Paul McCartney. And it gets worse. Among the living black artists with their own Starbucks album, the youngest is Mary J. Blige, at 48. This is beyond problematic—beyond problematical, even. This is problematicationalistical. Sooner rather than later Howard Schultz will have to confront Starbucks’ long, painful history of reverse ageism.

There’s an irony in this line of attack against Schultz, coming as it does from a wing of his former party that is now consumed, to the exclusion of pretty much everything else, in matters of racial and sexual identity. Schultz’s support for gay rights and gay marriage as Starbucks CEO was early and ardent. His last turn in the public spotlight followed the arrest of two black customers for trespassing in a Philadelphia Starbucks; a viral video made it clear the two men were simply waiting quietly for a friend.

The apologies from Schultz and other executives were swift, abject, and incessant, and culminated finally in his insistence that all company-owned stores be closed for a day so employees might be cleansed of their unconscious racism through sensitivity training. No social scientist has been able to demonstrate that “implicit bias” even exists, much less that it can be trained away by an afternoon of role-playing and power point. Schultz’s response was precisely the sort of vast and useless gesture that the incoherence of identity politics requires.

No, where Schultz peels away from his party is in its steady march toward what even some socialists are calling socialism. It’s a fight he wants to pick. In one of his first interviews as a potential candidate, he called the party’s infatuation with nationalized health care—Medicare for all—“unAmerican.” Later he pointed to a soak-the-rich tax scheme floated recently by Elizabeth Warren. “When I see Elizabeth Warren come out with a ridiculous plan of taxing wealthy people a surtax of 2 percent because it makes a good headline … when she knows for a fact that’s not something that’s ever gonna be passed, this is what’s wrong,” Schultz said. Warren’s response wasn’t to defend the surtax but to question Schultz’s political savvy. “We have a billionaire who says he wants to jump into the race,” she said, “and the first issue he’s raised is no new taxes on billionaires? Let’s see how that goes.”

It probably won’t go very well, as every political observer seems to agree. Like so many entrepreneurs who have transformed ordinary American life—like Steve Jobs, like Henry Ford—Howard Schultz is first and last a salesman. (Jobs couldn’t write a line of code, and Ford couldn’t replace a carburetor, and I don’t think you’d want Schultz fussing with your Mr. Coffee.) Leave aside the mechanical difficulties that likely doom any third-party presidential run. From the Ground Up and Schultz’s few political speeches show a candidate who is neither one thing nor the other—a peddler with an empty sample case. He shimmies his way between vague and imaginary caricatures—the “extreme left,” for example, that wants to confiscate all private firearms and the “extreme right” that opposes all restrictions on gun ownership—and emerges at the other end boldly in favor of “common sense gun control,” details to come.

In this way Schultz hopes to define himself as the political equivalent of a jackalope: the “fiscally conservative social liberal” that folklorists and mythologists have been describing for decades, though no one has ever seen one in the flesh. Meanwhile, the most prized voters in 2020 will undoubtedly be those Obama-Trump switch-hitters who descended from the hills and hollows in 2016 to tilt Wisconsin, Michigan, and Pennsylvania toward Donald Trump—voters who are, alas, best described as “fiscally liberal social conservatives.” We should wish Schultz, a public-spirited man, good luck in his journey to his promise. But before he reimagines America he’ll have to deal with the one we’ve already got. 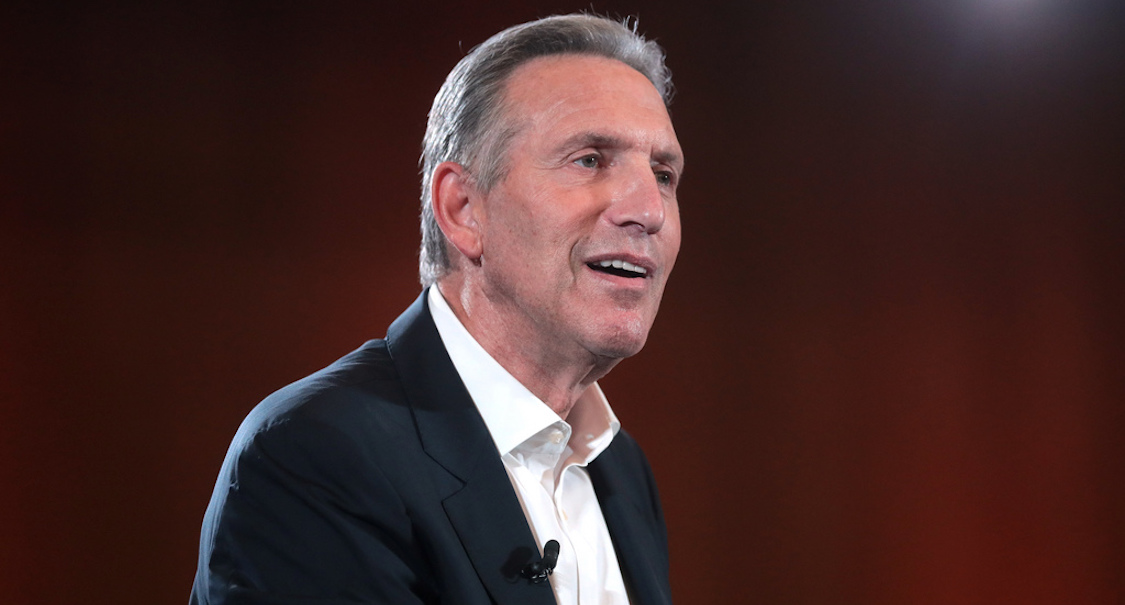