o understand Mitch McConnell’s predicament, let us start with the National Press Club’s annual journalism awards. You’d be hard-pressed to find a more humorless, or less humorous, bunch than the members of the NPC. To prove the point, they select one lucky writer every year to win the club’s award for humor writing. This year’s winner was a columnist named Mark Harmon, who yuks it up in the Knoxville News Sentinel. According to the Poynter Morning Media Wire, the NPC judges praised Harmon for his “knack for taking a simple idea or detail…and spinning it into a highly creative scenario.”

Of all the creative scenarios Harmon has spun, the judges cited one in particular, a column with the headline “Mitch McConnell Meets the Other Prince of Darkness.”

So Mitch McConnell dies and goes to hell. There he is welcomed by Lucifer, aka Beelzebub, aka the Devil. “You have a lot of friends here,” the devil tells McConnell. The Senate majority leader is then introduced to Machiavelli, who flatters him: “Sometimes your duplicity, insincerity, and mendacity left me gasping.” (The joke here is, McConnell is often called “Machiavellian” by people who have never read Machiavelli.) Machiavelli in turn introduces McConnell to his new hellmates, Hitler, Stalin, and Pol Pot. “Your evil is so large, frequent, and dramatic,” the devil tells him, “that a lot of tortured souls here are worried you will damage our reputation.” Soon they are joined by Charles Manson, Jeffrey Dahmer, and, of course, Roger Ailes.

The adjective “gossamer” is not the first word that leaps to mind when assessing Mark Harmon’s satirical gifts. What comes to mind instead are visions of sledgehammers, of horses flogged lifeless under a desert sun, of plump, fisted hands endlessly pounding slabs of beef steak…

But the NPC’s strong affinity for Harmon’s humor does tell us something about the place McConnell holds in the fevered imagination of permanent Washington. I can’t think of many political figures whom a nonideological trade group like the NPC could casually compare to Pol Pot. Second only perhaps to Donald Trump, McConnell provokes a special kind of derangement among his enemies.

The derangement is bipartisan. Republicans no less than Democrats tee off on McConnell. When he is out of favor with conservative Republicans, as he has often been, you will hear folksy Lou Dobbs of Fox News complain that he “isn’t worth a doggone.” Sean Hannity will dot the camera lens with flecks of spittle as he sputters against a “weak, spineless leader who does not keep his word…[and] who has lived in the swamp way too long.”

And you will find the conservative blogger Erick Erickson, who has written items with headlines such as “Mitch McConnell Is Full of Crap.” A few years ago, Erickson was particularly irked at McConnell over that week’s Disaster of the Century. President Obama had unilaterally altered U.S. immigration rules, and Republicans in the House of Representatives responded by attaching provisions to the Homeland Security department budget to reverse Obama’s action. McConnell put a stop to the House Republicans’ efforts by insisting the Senate pass a “clean” budget bill without the House provisions.

McConnell’s reasoning was straightforward, and typical of him. If the Senate passed the House’s version of the budget, it would be vetoed by Obama. Then the department would go underfunded, and the Congress and the president would be at a standoff, facing yet another government shutdown. Forcing shutdowns has been an on-and-off-again tactic of congressional Republicans for 20 years, and it has always failed to get them what they want. They just know it’s bound to work one of these days.

McConnell thinks realistically, and Erick Erickson, wearing his conservatism like a straightjacket, does not approve of realism, or of McConnell. Sitting at his keyboard, he dug deep and found the tiny Mark Harmon that lives, alas, in all of us. Out came the sledgehammer and lash, down went the horses, neighing in agony. “Eunuch Mitch McConnell Squeals Like a Pig,” was the title of Erickson’s little piece. McConnell, he wrote, “just went all Ned Beatty in Deliverance the moment Barack Obama looked at him funny.” (In the movie Deliverance, the actor Ned Beatty played an unlucky fellow who “squeals like a pig” as he’s anally raped.)

“McConnell behaved as if he needs testosterone injections,” Erickson went on, saving his best material for the kicker: “And in conclusion, given McConnell’s behavior, I find it deeply ironic the postal code for his state is KY.” I don’t think “ironic” is the word he wants here.

When liberals such as Harmon and his admirers at the NPC express their contempt for McConnell, they pretend he’s morally deficient, even Hitlerian, especially by the lights of their own highly developed consciences. When conservatives feel the gorge rising, as Erickson does, they pretend McConnell is sexually deficient. One side insults his virtue, the other his virility. Mitch McConnell: Devil or Nancy boy?

The truth is, he’s both, as situations warrant. McConnell has spent his entire working life in government; he’s a government guy. He started as a mildly conservative Republican, wobbly on abortion and union rights. Elected to the Senate in 1984, he became respected on the right for his unbending opposition to a behemoth tobacco-restriction bill and the various campaign-finance reforms that conservatives took to be poorly disguised attacks on the free-speech rights of rich people. Then, as he ascended to the leadership, he acquired the respect of the mainstream media as a savvy, can-do tactician.

That made his former right-wing allies suspicious. “The Washington media loves Mitch McConnell as a creature of the establishment,” wrote Erickson. Seemingly those suspicions were confirmed when McConnell deployed the party’s machinery to block the long-shot primary campaigns of tea-party favorites like Ted Cruz and Mike Lee, who McConnell thought were unlikely to win a general election. “Ditch Mitch,” chanted Dobbs; tea partiers even fielded a candidate to challenge McConnell in his own primary. (The challenger got creamed.) His various strategic capitulations to Obama sealed his fate as a weenie.

Or so it seemed, until now. Today, McConnell’s role in passing tax cuts and his masterful herding of President Trump’s judicial nominees have bestowed upon him, in the eyes of conservatives, the glow of a man swimming in testosterone.

It would be a mistake to think of any of McConnell’s various turnings, and the reputational shifts that accompanied them, as ideological. McConnell is indeed a creature of the swamp. He’s not just a government guy, he’s a party guy. When government works smoothly, for better or worse, ideology becomes a second-order question, far behind the question of party solidarity. Political parties supersede ideology because they contain it. This is true even in an era like ours, when the parties appear to be breaking apart, perhaps committing suicide. A legislative leader like McConnell labors always on the shifting terrain of what can plausibly be done.

By all indications, Mitch McConnell’s brain doesn’t operate ideologically. He will often be a disappointment to those whose brains work no other way. He assumes that any victory for his party is also a victory for the (mildly) conservative, (inconsistently) small-government, (vaguely) pro-defense principles his party is supposed to embody and advance. His job is to win. And he does, with surprising frequency.

The joke, in the end, is on the jokers. Only someone of McConnell’s stolid gifts—for timing, anticipation, flexibility, stubbornness—could enact the larger agenda of the conservatives who wanted him exiled. Contra Lou Dobbs, he really is worth a doggone. Indispensable, in fact. 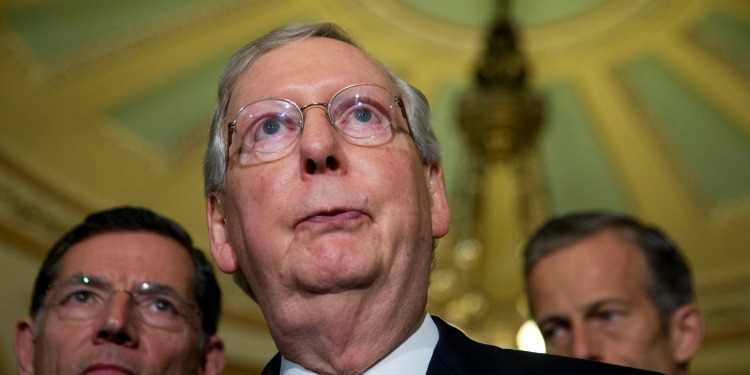