You see them attacking their rib eyes with entrenching tools at the Palm or leaning back in the plump, upholstered banquettes at the Capital Grille—faded figures but well-fed, a look of dreamy contentment about them, heads carefully coiffed, faces tanned and rounded, and giving off, through the Italian silk of their bespoke pinstripes, the faintest whiff of swamp gas. These are the Boys of ’94.

They came to Washington 24 years ago with the Gingrich Revolution, retaking the House of Representatives for the Republican Party for the first time in 40 years. Their famous Contract with America bristled with small-government idealism and contempt for deficit spending, social engineering, crony capitalism, and the manipulation of the powers of the state on behalf of monied interests. The Class of ’94 was promising something that seemed impossible for public servants to ask of themselves. They were seizing power for the purpose of giving it away, returning it to the states and localities and to the people themselves.

And indeed, it proved impossible. “Discretionary spending”—the part of the federal budget Congress actually controls—did fall that first year of the revolution, but it went up the next and continued to climb faster than inflation. Not a single agency or department was eliminated, and the hymns to decentralized power fell silent at last when the Republican Congress imposed on all 50 states a national standard for—can you guess?—drunk driving. By twos and threes and fours, the revolutionaries left Congress, but not Washington. A large number hired on as the lobbyists and special pleaders, the swamp creatures, they had campaigned against.

It’s hard to imagine Paul Ryan, the soon to be ex-speaker of the House, living out his years as a swamp creature. His retirement from Congress, of course, was self-imposed. His continuing popularity back home in Wisconsin’s first congressional district was affirmed when a hand-picked protégé was easily elected to fill his seat. He leaves under his own steam, but no one quite trusts the reason he gives for his departure, for how often does an ambitious professional politician at the peak of his career suddenly realize he has a family he wants to spend more time with? The most common assumption is that Ryan has simply given up on life in Donald Trump’s GOP, whose style, interests, and political direction are so different from his own.

There must be truth here. Ryan is quiet, boyish, intellectually curious. Increasingly he has been surrounded by colleagues who, chimp-like, bound after a loud, boorish, incurious leader in the White House. But here as in other matters, political observers in Washington reflexively give Trump too much credit (or blame). There are planetary orbits beyond the president’s gravitational field. The fact is that long before Trump rode his golden escalator to the presidency, Ryan and the conservative movement of which he was the purest expression were already exhausted, finished, kaput, intellectually and politically.

Only 48, Ryan seems a man from a different era. His early hero was Jack Kemp, for whom he went to work not long after college. Kemp was an exemplar of Reagan-era conservatism. He was positively, indeed annoyingly, giddy about the power of free markets to unleash human potential—regardless, as Major T.J. Kong put it in Dr. Strangelove, “of yer race, yer color, or yer creed.” Kemp insisted that an expansive, upbeat conservative movement offered the way out of the bleak cul-de-sac into which the bankers and accountants of the Republican establishment had led the party during the 1960s and ’70s. With the same visions dancing in his head, Ryan ran for Congress the first chance he got, in 1998, and won at the tender age of 28.

Ryan quickly established himself among movement conservatives as the party’s leading man of ideas—meaning that he grazed the think tanks and issued wonkish white papers on abstruse subjects. It took a while for the man to meet his moment. By the end of Ryan’s first term, the Republican ideology du jour involved the pro-government, “market-oriented” confections of George W. Bush’s compassionate conservatism, which was conceived as a replacement for the fading Gingrich Revolution. The signature achievement of comp-con was a giant hairball of federal mandates aimed at the nation’s public schools called No Child Left Behind. Within a couple years, teachers, academics, parents, local officials, and students had rendered a unanimous judgment. They hated No Child Left Behind. Also, it didn’t work.

The party’s leading man of ideas stepped up with an alternative idea to rally round: allowing taxpayers to place some of their Social Security moneys in a private individual account to manage as they saw fit. It was a twofer. Partial privatization would enlarge personal liberty, Ryan argued, and reduce the cost of an already overextended program. Social Security reform would have been a great blow against statism, in theory, except it would probably have been unworkable in practice, owing to political and actuarial realities. Even so, with his own bag of big ideas depleted, Bush embraced a milder version of the ideas man’s idea in 2005 and even hit the road to promote it. Republicans got creamed in the next midterm election. There were lots of reasons, among them the public’s horror at the thought of a reformed Social Security system.

Ryan believed that Bush’s inability to sell partial privatization to the public was a failure of marketing. The rise of Barack Obama gave Ryan the chance to assemble a platform of policies attacking the corruptions of statism on every front. The conservative movement has always quivered with tensions and weaknesses. After all, there’s one built into the very phrase conservative movement: How do you mobilize a mass of individualists? Ryan tried with what was first called the Roadmap for America’s Future and later the Path to Prosperity (that’s some marketing right there).

Ryan’s platform showed another conservative-movement weakness: a taste for totalism. It did everything all at once. Social Security privatization was in there, slightly attenuated, along with top-to-bottom reworkings of every aspect of the welfare state, from Medicaid and Medicare to job training and the tax code. Most important, all this energetic reform would be undertaken in the service not merely of fiscal responsibility but of republican virtue. “It restores an American character,” read one of the documents, dotted with capital letters like an 18th-century pamphlet, “rooted in individual initiative, entrepreneurship, and opportunity—qualities that make each American’s pursuit of personal destiny a net contribution to the Nation’s common good as well. In short, it is built on the enduring truths from which America’s Founders established this great and exceptional Nation.”

The Path to the Roadmap—or was it the other way around?—horrified Democrats and the political press corps and made the public uneasy. It dazzled Washington conservatives, however. Ryan was elevated to the House Budget Committee, then to chairman of the Ways and Means Committee, and finally to the speaker’s chair, a job he sincerely said he didn’t want and whose chief duties —fundraising and corralling congressmen—he wasn’t suited for. (Along the way he had a three-month period during which he was his party’s nominee for vice president.) His great achievement as speaker was last year’s tax reform, which for all its virtues will take the federal government’s debt to levels undreamed of by the young conservatives who once railed against the profligacy of Democrats.

The Washington press presented Ryan first as a whiz kid, then as a purist, then as a villain, and now as a tragic figure—another victim of Trump’s brutality. In fact, Ryan’s career is part of a train that extends back in time to a point long before Trump, past even the Boys of ’94. There’s a reason so many onetime conservative idealists have found a home at the Palm and the Capital Grille. They discovered there was no percentage in foisting the rigors and parsimony of small government and enlarged freedom on a resistant public. Why not join the Washington game if you can’t beat it? I doubt that Paul Ryan, an intelligent and honorable man, will join them in the banquettes. On the other hand, I’m not sure I’d blame him if he did. It’s nice work if you can get it, and he’s tried his best. And the rib eyes are awesome. 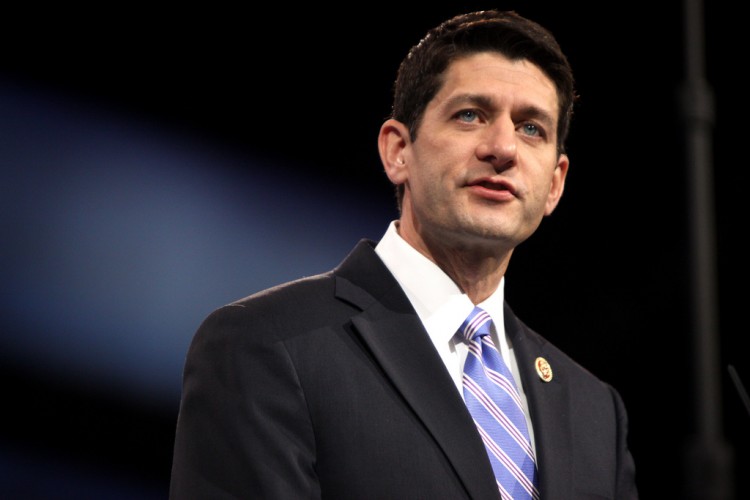