ealpolitik is back in fashion—again,” argues John Bew in his well-researched, fluently written, and groundbreaking book, Realpolitik: A History. Ideological exhaustion, economic downturn, and military overstretch, as well as a succession of crises in the Middle East, Eastern Europe, and the Pacific “have ensured that Realpolitik has a receptive audience once more.” 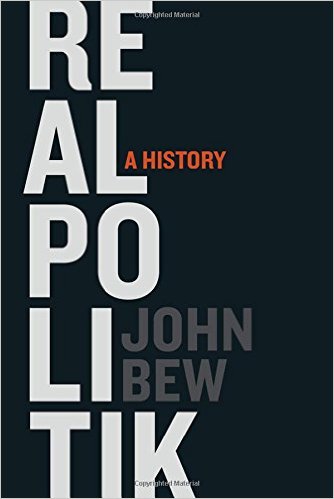 Realpolitik, Bew writes, “is something distinct from raison d’état, pursuit of ‘the national interest’…with which it has often been conflated.” The concept was the brainchild of a German liberal activist named August von Rochau in 1853, who used the term to describe not a philosophical approach to state action but rather a method of analyzing complex political problems. Bew, who teaches at King’s College in London, tells us that the term crossed the seas from Bismarckian Germany into the Anglosphere around 120 years ago. But, despite its endurance, Realpolitik “has always had an odd place in Anglo-American political discourse.” It has always seemed foreign in its origins—“a hard Teutonic neologism,” Bew writes, “it can get stuck in the craw”—and philosophically distant from the classic Anglo-American view of the world.

Over time, Realpolitik has come to refer to a foreign-policy approach that seeks to sideline or eliminate moral considerations from the way a nation exercises its power in favor of practical ones. It has since been backdated, in effect, to encompass the ideas of Niccolo Machiavelli, whose epochal work in the 15th century was designed to convince leaders that they should base their actions on the cold, hard facts of the world and a dispassionate reading of human nature rather than through the lens of morality or religion.

Bew’s book is not a celebration of Realpolitik, but an analysis of its strengths and weaknesses, arguing that the concept “has given birth to a number of bastardized and half-formed versions of itself, which were the source of misconception—and, in some cases, opened the door to great wrongdoing.” Realpolitik seems to have been responsible for a few good things—European peace from 1870 to 1914, for example—but plenty of questionable things, too. Indeed, Realpolitik and its adherents have had to weather deeply disturbing accusations that its application led to the appeasement of the Nazis in the 1930s and the policy of détente toward the Soviet Union in the 1970s.

Even Henry Kissinger, with whom the term is most associated in the United States, prefers to be called a “realist.” He has complained that “the advocates of a realist foreign policy are caricatured with the German term Realpolitik. I suppose [this is done] to facilitate the choosing of sides.” Kissinger even notes in his book Diplomacy that Otto von Bismarck’s unification of Germany in the 1870s “caused Realpolitik to turn in on itself, accomplishing the opposite of what it was meant to achieve.” Rather than serving as a source of European stability, Realpolitik Germany eventually morphed into a disruptive and revolutionary power.

Bew believes that the events of the past decade have “shorn” Realpolitik “of some of these negative connotations.” This is largely due, he says, to the “perceived excess of idealism in Anglo-American foreign policy of the post–Cold War era.” Since Realpolitik presents itself as “a cool, circumspect approach to statecraft,” it can be used to provide a contrast to the naive utopianism that supposedly led George W. Bush astray. Indeed, in a 2010 New York Times article, then–White House chief of staff Rahm Emanuel went so far as to say of President Obama  that “if you had to put him in a category, he’s probably more Realpolitik…you’ve got to be cold-blooded about the self-interests of your nation.”

President Obama is undoubtedly cold-blooded—his nickname in the British Foreign Office is “Spock”—but it’s not at all clear that he is so when it comes to the American national interest. Would a true practitioner of Realpolitik along Bismarckian lines have really passed up the opportunity to support the 2009 street revolution in Iran? Or have allowed an American ambassador to be murdered unavenged in Benghazi? Or withdrawn U.S. forces from the region to give ISIS space to grow and take over large swathes of Syria and Iraq? Or set out red lines over chemical weapons that President Assad flagrantly flouted unpunished? Or signed a deal with Iran that virtually guarantees nuclear proliferation in the Middle East? America’s interests have not been cold-bloodedly pursued in any of these cases. Quite the opposite.

Bew wonders whether we are in a “Machiavellian moment,” a time when “public necessity requires actions that private ethics and religious values might condemn as unjust and immoral.” It is indeed true that Machiavelli himself is having a moment, with the publication of numerous studies and biographies and essays seeking to apply the lessons and themes of The Prince to contemporary world politics. But no matter their leanings, our leaders do seem to find it impossible to discuss the current conditions in the world without making constant reference to morality—to the Western “responsibility” for the refugee crisis in Europe and to the battle against the Islamic State’s “inhuman” conduct. Bew’s indispensable history highlights the virtues of cool, circumspect, rational, cold-blooded Realpolitik statecraft—and implicitly demonstrates that at a time of moral challenge like this one, it still sticks in the craw.