he last time the entire world went to war, there were no nuclear weapons—and upwards of 80 million people died anyway. Even with carnage on that scale, it took two atomic bombs to halt the bloodletting. Global peace has prevailed since, despite savage regional conflicts, and this is no small thing given humanity’s sanguinary instincts. Credit must go in large measure to America’s seven-decade commitment to a robust and credible nuclear deterrent.

One would not have known this from President Barack Obama’s pathbreaking speech at Hiroshima Peace Memorial Park in May—the first time an American president has visited Japan’s site memorializing the dead and wounded from the atomic strike on August 6, 1945. Instead, the president stressed different themes, inchoately presenting Japan and America as morally equivalent victims of some great natural disaster—yet one that the United States might have prevented, had it so chosen.

“The world war that reached its brutal end in Hiroshima and Nagasaki was fought among the wealthiest and most powerful of nations,” Obama said. “Their civilizations had given the world great cities and magnificent art. Their thinkers had advanced ideas of justice and harmony and truth.”

But the Second World War didn’t reach its end at Hiroshima. It was brought to an end at Hiroshima—righteously, and not inevitably. It took focus and persistence and intelligence and enduring heroism to conquer the transcendental evil embodied in the Tripartite Pact alliance of Nazi Germany, Fascist Italy, and Imperial Japan. And it is simply wrong, 71 years after the fact, to place the conquering nations on the same moral plane as the conquered, as Obama did, by citing the advanced nature of the civilizations they had in common. The advances in civilization on the part of the Axis were used in an effort to conquer and destroy; it took the advances in the civilizations of the Allies to prevent the Axis from succeeding.

Obama’s equation not only produced bad history; it also embodied questionable presidential behavior. “Remember Pearl Harbor” is a simplistic slogan, but Obama might well have acknowledged the event that bookended Hiroshima—not only out of fairness, but also to underscore the fundamental difference between Japan and the United States seven-plus decades ago. Which is this: Japan consciously, eagerly, savagely initiated a Pacific Rim war that ultimately killed some 26 million people, including 3.1 million of its own citizens. The United States, isolationist to a fault until December 7, 1941, was dragged into the war by Japanese treachery—incurring 117,000 battle deaths before forcing an end to the carnage at Hiroshima and Nagasaki.

Many of those who object to the bombings now insist that Japan effectively had been reduced to a Stone Age economy by August 1945, and that surrender was only a matter of time. But while the Stone Age analogy is largely correct, the likelihood of an imminent surrender is based, at best, on no evidence whatsoever.

Moreover, there was nothing in Japan’s conduct of the war to that point to suggest that surrender was at hand. Allied commanders, and President Harry S. Truman, had as predictors only the suicidal resistance Japanese fighters had displayed across the Pacific—on Guadalcanal, at Saipan and Iwo Jima, and especially at Okinawa—as well as Japan’s obdurate refusal to respond positively to a diplomatic ultimatum issued at the Potsdam Conference weeks earlier.

Imperial soldiers had starved themselves to death rather than surrender on Guadalcanal; they threw Japanese infants into the sea from cliffs on Saipan rather than relinquish them to the Americans; and they reduced two full Marine Corps divisions to bloody ruins on Iwo Jima. All that paled in comparison to the kamikaze-driven carnage at Okinawa.

Cultural context is important, too. By the time the decision to use atomic weaponry had been made, American policymakers had come to understand the absolutist nature of both Imperial Japanese militarism and its animating samurai culture.

Consider this example: Admiral Isoroku Yamamoto, Japan’s brightest naval light and the architect of the Pearl Harbor attack, was a moderate. He understood that war with America was almost certain to end in catastrophic defeat, and he wasn’t bashful about saying so. As a result of his candor, he was given command of the main Imperial battle fleet and sent to sea—largely to shield him from assassination, a perennial threat to rational military and civilian policymakers both before and during the war.

And yet here was the essence of Yamamoto’s personal philosophy: “To die for Emperor and Nation is the highest hope of a military man,” he wrote shortly before the war. “After a brave hard fight the blossoms are scattered on the fighting field. One man’s life or death is a matter of no importance. All that matters is the Empire.”

To be sure, a military whose most humane thinker and seer saw thousands upon thousands of dead and mutilated soldiers as “blossoms scattered on the fighting field” can be ground down and, ultimately, defeated. But not easily. The best that can be hoped for is to soldier on while containing the carnage. Truman wasn’t about to go that route while an alternative was at hand.

In that sense, then, Hiroshima and Nagasaki were not war crimes but acts of mercy toward the Americans who would have died and been wounded in attempting to do over the course of a year what the two strikes achieved in a week. And, if nothing else, the example they set suggests to the world that the West will defend itself in the most potent manner possible when challenged by fanatical excess. But lessons harshly learned nevertheless sometimes fade, as the Obama presidency demonstrates, and as the Hiroshima speech illustrates.

Obama’s speech represented an odd effort to place the conduct of the Japanese in some kind of historical context that effectively helped excuse it. “Worldwide, wherever archeologists find concentrations of human remains,” Obama said, “they virtually without exception find unmistakable evidence of organized human conflict.” This is certainly true, but like Nazi Germany, Japan was something new—exercising power through advanced technology while embracing and advancing a post-Darwinian theory of racial and cultural superiority that excused and argued for the unparalleled savagery with which it dominated the Far East.

Israel’s recently acknowledged, submarine-based second-strike nuclear capability is a more credible guarantor of nuclear peace in the Middle East than anything included in Obama’s Iran treaty, or in his administration’s regional policies.


In regularizing Japan’s conduct, Obama was implicitly regularizing the conflicts of his time as well. The United States has been at unambiguous war with radical Islam for 15 years now—itself a new kind of antagonist, albeit one with ancient roots. It is a profoundly religious war we are fighting that is in no way discretionary, though we want to pretend it is: Try to walk away, and Syria happens.

Just as Obama sought to act as though Japan were a traditional kind of aggressor so that he would not have to argue for the civilizational struggle that required Hiroshima and Nagasaki to win, he is unwilling to acknowledge the role of religion in the conflict—or, at least, to be even slightly judgmental about it. Instead, in discussing the faith-based element of our current adversary, he resorted again to moral equivalence: “Every great religion promises a pathway to love and peace and righteousness. And yet no religion has been spared from believers who have claimed their faith as a license to kill.”

That is true enough as a matter of cliché, but the observation’s relevance to current crises is limited. Christians in the West generally quit killing each other over theology when the Peace of Westphalia ended the 30 Years War in 1648. But, even laying the semi-secularist Syrian civil war aside, scarcely a day goes by without intra-Islamist bombings and related slaughter—to say nothing of the threat Islamist fanaticism poses to the West.

Taking note of this isn’t bigotry. It is simply the acknowledgment of a fact. Even so, it is a step that the president refuses to take. Obama’s singular failure as a war leader is that he refuses to publicly discuss the nature of the enemy, and especially to address the twisted religiosity that inspires and energizes him.

In that sense, what could be more terrifying than a nuclear-armed religious fanatic—unless it’s a nuclear-armed nation led by a coalition of fanatics intent on imposing their version of Islam on nonconforming neighbors in the name of doctrinal purity. That would be Shia Iran, and its ambitions for Sunni Saudi Arabia, for starters.

There are many other reasons to keep nuclear weapons away from Iran—its enmity toward the West in general, and Israel in particular, is on the list—but its undisguised intent to reconstruct the Persian empire on a nuclear platform is perhaps the most compelling. But not to Obama, who speaks of these weapons as though their monstrousness should be entirely divorced from the way and manner in which they might be used.

“Technological progress without an equivalent progress in human institutions can doom us,” the president said at Hiroshima. “The scientific revolution that led to the splitting of an atom requires a moral revolution as well.”

Here equivalence genuflects to hypocrisy. The sham of a nuclear agreement engineered by the president and his people in 2015 represents not “progress in human institutions,” but an unambiguous regression. And what sort of a “moral revolution” acquiesces to nuclear proliferation in the first place? The treaty permits Iran to undertake unlimited enrichment of uranium in 10 years, and of plutonium after 15.

But while four U.S. presidential cycles may seem like forever in Washington, that’s the blink of an eye in a culture that numbers its history in millennia. And, as a practical matter, 10 to 15 years is likely the time Iran will need to perfect a credible nuclear delivery system anyway. So how long before the Saudis respond in kind, out of self-protection? Turkey? Egypt?

Not to put too fine a point on it, but Israel’s recently acknowledged, submarine-based second-strike nuclear capability is a more credible guarantor of nuclear peace in the Middle East than anything included in Obama’s Iran treaty, or in his administration’s regional policies.

Still, the president found it possible to say, without irony, at the Peace Memorial: “We stand here in the middle of this city and force ourselves to imagine the moment the bomb fell. We force ourselves to feel the dread of children confused by what they see. We listen to a silent cry. We remember all the innocents killed across the arc of that terrible war.”

Plus this: “We have a shared responsibility to look directly into the eye of history and ask what we must do differently to curb such suffering again.” With Iran, he looked—and he blinked. The world is more dangerous for that. At Hiroshima, he dissembled. So much for nuclear nonproliferation, Obama-style.

He should have said that America is indeed sorry that Imperial Japanese aggression made it necessary to develop and deploy atomic weapons, but that sometimes when you sow the wind, you do indeed reap the whirlwind. That would have been egregiously undiplomatic, of course, so maybe the president shouldn’t have gone to Hiroshima in the first place.

But he did, and there solemnly declared that he truly wants “a future in which Hiroshima and Nagasaki are known not as the dawn of atomic warfare, but as the start of our own moral awakening.”

If that had actually been true for him, he would not have acquiesced to the legalization of an irredentist nuclear power in Tehran. But he did. The true lessons of Hiroshima and Nagasaki are unknown to him. 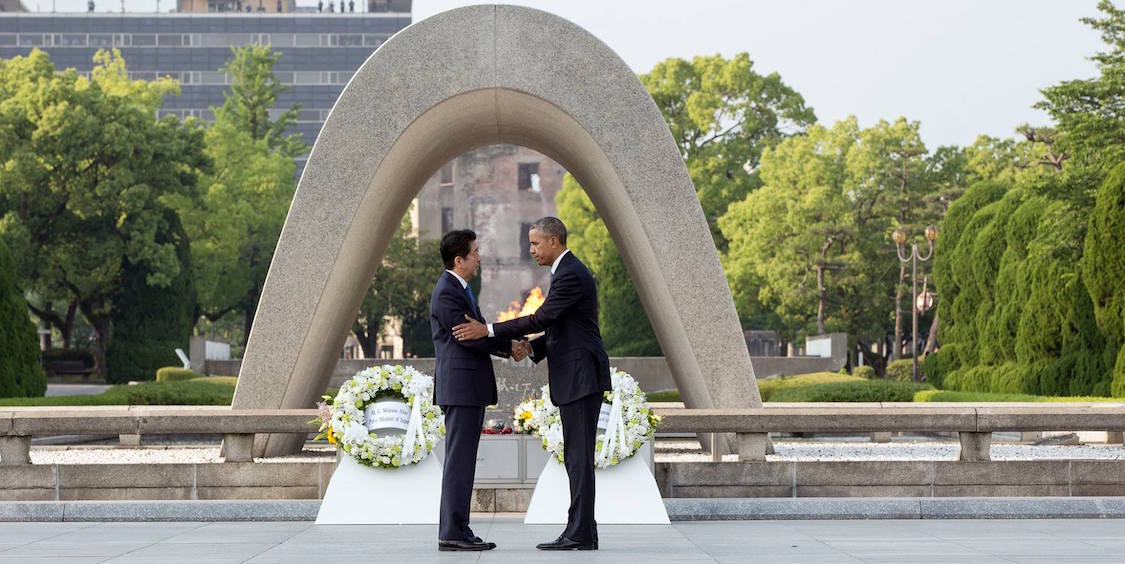