In 2017, one month into the presidency of Donald Trump, the Washington Post announced the newspaper’s new, portentous motto: “Democracy Dies in Darkness.” It was an early sign of the self-regard journalists would embrace during the Trump years, as well as a hint of the toxic codependent relationship they formed with him.

Four years on and despite all their protestations about Trump’s frequent norm violations and abiding hostility to journalists, the mainstream media still need him to remain in the public eye, if only to continue to play a crucial role in the story they have been telling themselves: that they are responsible for saving democracy.

The exemplar of the form is Washington Post media columnist Margaret Sullivan. Formerly the public editor of the New York Times and before that a journalist in Buffalo, Sullivan devoted her first post-election column to congratulating her fellow journalists on their fearlessness in the Trump era. “Without the reality-based press, whatever its flaws and shortcomings, we would be utterly lost,” she wrote.

What flaws, you ask? There are plenty to catalogue: Within weeks of Trump’s election victory in 2016, the press recast his populism as a species of fascism. Trump’s defeated rival Hillary Clinton was given airtime and column inches to complain about her loss and to declare the president illegitimate, as did many other Democratic political leaders. A Women’s March on Washington organized to protest Trump’s inauguration was covered with breathless praise (while the anti-Semitism of the march’s organizers, such as Linda Sarsour, was ignored). Actions taken by previous presidents, such as detaining children who had illegally crossed the border, were reported as newfound horrors when Trump did them—with no acknowledgment that the photographs used to display the horror had been taken during the Obama administration. I could go on with examples for 10,000 words, but you get the idea.

And yet the only flaw Sullivan was able to identify in her first column after the 2020 election was this: Journalists did their job too well. “Maybe worst of all, we employed the time-honored method of treating both sides of a controversy as roughly equal,” Sullivan writes. “This might have been fine at an earlier moment of history. But it was almost criminally misleading in the Trump era.” Journalists, she claimed, have “spent the past four years in a defensive crouch, far too often favoring this false balance over simple truth-telling.” Despite having won in a free and fair election in 2016, Trump was a unique threat to democracy. Journalists had a special moral obligation to expose him, and their only failing, apparently, was not doing so enough.

It’s odd to hear Sullivan make the case for truth-telling, given the hyperbole and slapdash approach to facts that have characterized her own work in the Trump era. In a piece for the Post’s Style section written just before Trump’s inauguration, Sullivan warned that “a hellscape of lies and distorted reality awaits journalists covering President Trump.” She predicted that Trump “will punish journalists for doing their jobs” and “Trump’s reign will probably be awash in investigations and prosecutions of journalists for doing their jobs, stirring up the ugliest of class wars along the way.” (While Trump did relentlessly mock journalists and whine bitterly about how they treated him, he did not use the official levers of government to hunt them, as the Obama administration did.)

Like many mainstream liberal journalists, Sullivan was certain that Trump was an illegitimately elected Russian puppet. In July 2018, she devoted an entire column to national-security blogger Marcy Wheeler, who, at the height of Russiagate hysteria, claimed (without evidence) that she was going to be assassinated because she had turned over a Trump-administration source to the FBI (it was a matter of “conscience,” she told Sullivan).

Sullivan eagerly and uncritically regurgitated all of Wheeler’s claims, including “that Russian interference in the 2016 election was a very real thing, and that Trump associates played a part”—which the Mueller investigation later demonstrated simply wasn’t true. “If something happens to me—if someone releases stolen information about me or knocks me off tomorrow—everyone will now know why and who likely did it,” Wheeler told Sullivan. To which the columnist added this piquant thought: “The Russians do have a penchant for disposing of people they find threatening.”

Even after Trump was impeached and acquitted, and the Russiagate conspiracy fizzled, Sullivan remained convinced that Trump would bring about democracy’s demise. She wrote in February 2020: “Should the news media continue as usual? Should it retain its own traditions as the nation slides toward autocracy?”

Like many in the mainstream media, Sullivan used her position of power to draw a line of demarcation on which one side (hers) was made up of “reality-based journalists,” and the other (anyone who disagreed with them or was not sufficiently opposed to Trump) was composed of propagandists or enablers of fascism.

In a May 2020 column, she blamed Trump’s frequent denunciations of “fake news” for the actions of protestors marching against police use of force who had vandalized the CNN building in Atlanta. Most of the protestors were left-leaning Black Lives Matter supporters, whom CNN had been giving flattering coverage. Rather than noting this irony, Sullivan quoted PEN America’s Suzanne Nossel, who said, “By denigrating journalists so often, [Trump] has degraded respect for what journalists do and the crucial role they play in a democracy.” Sullivan called it “shameful” that Trump hadn’t denounced the protestors.

By August, Sullivan had become an enthusiastic purveyor of the “post-office conspiracy,” which posited that Trump’s complaints about mail-in voting were part of an effort to rig the election. Activists on social media posted bizarre claims that mailboxes were being removed and mail-sorting machines sabotaged, and these claims soon traveled from Twitter to the front page. “Trump’s attacks on the post office deserve sustained, red-alert coverage from the media,” Sullivan wrote, and argued that journalists would be “abdicating their duty” if they didn’t continue to elevate what was self-evidently a non-story then and would be immediately disappeared once word came down that we were all to view mail-in voting as a glorious and unstoppable triumph. Like so many of Sullivan’s columns, this one ended with a reminder to journalists of their own importance: “Yes, it’s challenging. But let’s crank up the volume and do our jobs. Democracy itself depends on it.”

Did it? Trump lost the election, and despite his best (and bizarre) efforts to challenge the results, the nation’s institutions have survived, and the presidential transition is occurring. Tanks didn’t roll into Washington, and no one needed Sullivan’s November 12 advice about how to “cover something that, at worst, lays the groundwork for a coup attempt” or the “long, dangerous way to go” before the inauguration of Joe Biden.

The fact that her fears proved, at best, unfounded and, at worst, delusionally hysterical hasn’t impeded Sullivan a bit. She continues to encourage journalists to double down on the resistance tactics they embraced in the Trump years: “Be bolder and more direct than ever in telling it like it is. No more pussyfooting or punch-pulling.” Even more important, journalists should abandon even the pretense of objectivity. “This battle can’t be fought with facts alone,” she argues. Mainstream journalists must “appeal to passion as well as reason.”

She’s not alone in these sentiments. NYU’s Jay Rosen—a man who has been teaching journalism for decades despite a newsroom career that lasted a single year back in the 1970s—argues that the post-Trump moment is the time for journalists to come out openly as activists for progressive ideas rather than trying to be reporters of fact. “Journalists can build it back better after the siege lifts,” he argued in a November column. Like Sullivan, he portrayed the media as democracy’s savior. A “critical mass in the press finally acted on what so many Americans had been trying to tell them for years: That this was a civic emergency, and American democracy really was endangered by Trump.”

“So many Americans,” of course, means Americans who share Sullivan’s and Rosen’s ideological predilections. Everyone else is also a threat to the Republic. “It is by no means clear,” sniffed Rosen, “that the Republic will be kept when 70 million people voted for Donald Trump after they knew what he was.” Sarah Oates, who teaches journalism at the University of Maryland, was even more straightforward, calling Trump and his supporters “parasites in the libertarian media system, taking advantage of how they could assert disinformation and still get covered.”

The only way to combat such parasites, evidently, is by trusting an elite media to tell us what we should know and censoring the rest—for the good of democracy, of course. “By accepting and embracing that messages from the White House were now propaganda and not news,” Oates argues, “the networks were liberated to stop the flow of disinformation for the good of democracy.” Rosen declared that the press “will have to find a way to become pro-truth, pro-voting, anti-racist, and aggressively pro-democracy. It will have to cast its lot with those in both parties who are reality-based. It will have to learn to distinguish bad actors with propagandistic intent from normal speakers making their case.”

Sullivan and her ilk may see themselves as democracy’s superheroes, but she is less Captain Marvel and more Mrs. Jellyby—a philanthropist character in Charles Dickens’s Bleak House who neglects her own children in favor of saving strangers in foreign lands. These tribunes have become so fixated on Trump that they have failed to notice the anti-democratic rot happening within their own profession, a rot that has led to plummeting public trust in their work.

During the years that the media have been portraying themselves as brave fighters against the supposedly fascist Trump, they have also developed an irrational fear of the very thing in which their profession traffics: words. When Senator Tom Cotton published an op-ed with which some New York Times staffers disagreed, they claimed to feel physically threatened by it—and reacted by driving out coworkers who challenged this orthodoxy. Their words, when directed at Trump, are courageous; the words of those with whom they disagree, including those of their colleagues, are acts of violence that make them unsafe, and must be punished. Not all heroes wear capes, but few exhibit such outrageous cognitive dissonance about their own heroics.

In promulgating false narratives about the anti-Trump resistance, Russia’s supposed puppetry, and the monstrous manipulation of postboxes, Margaret Sullivan has been both a cheerleader for and a participant in the mainstream media’s embrace of the anti-democratic and illiberal behavior for which the media have spent five years castigating Donald Trump. 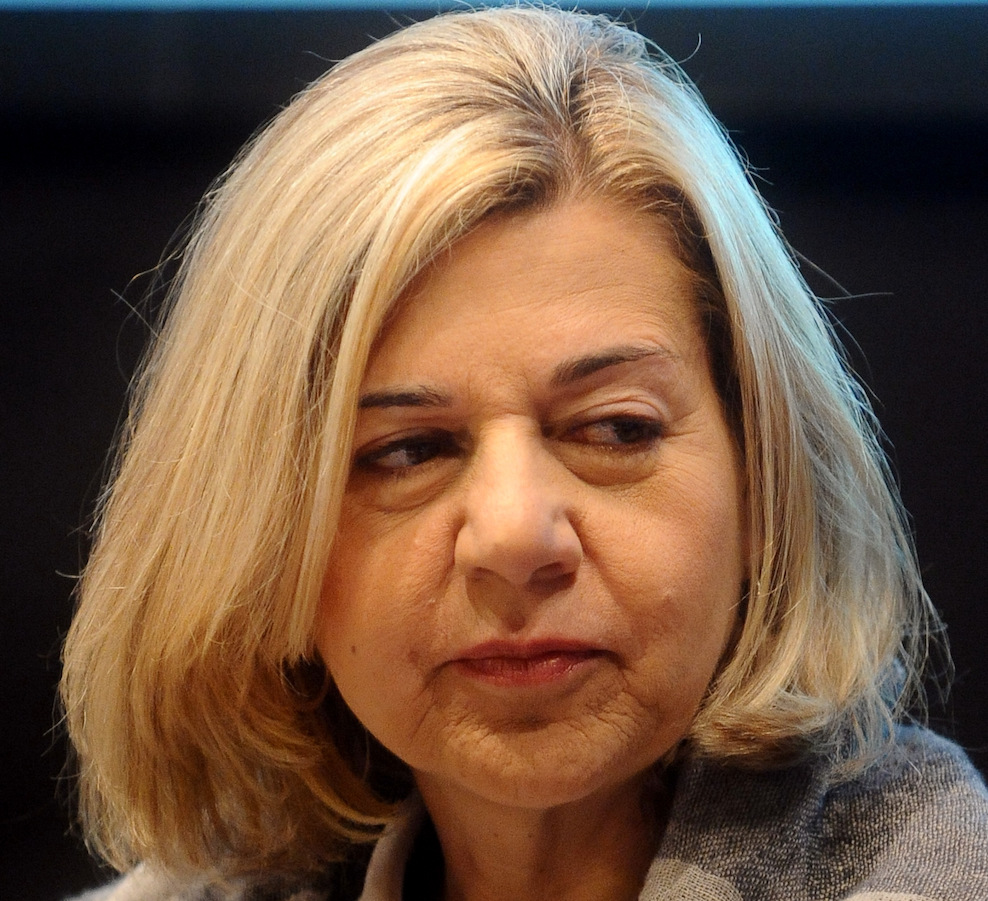