The much-hyped debut of The Handmaid’s Tale, a 10-part feature set in a near-future world in which a patriarchal, theocratic regime in the throes of a fertility crisis exercises absolute control over its women, is based on the 1985 novel by Margaret Atwood, who the New Yorker recently reminded us is “the prophet of dystopia.”

Thus far, Atwood’s vision seems to have been well- received by audiences in the 21st century, just as her book was rewarded in the 1980s for its attack on the Religious Right by being placed on women’s studies course syllabi in perpetuity. (Prophecy is a lucrative profession; the New Yorker informs us that Atwood resides “in a mansion in the Annex neighborhood of Toronto.”) A critic in the Atlantic claimed that Americans were “hyper-ready” for the new miniseries since the novel has “transcended the realm of fiction to become a kind of cultural shorthand for female oppression,” even though the only evidence marshaled to support this claim was the fact that some women in Texas recently dressed up as Atwood’s aggrieved handmaids to support abortion rights.

But handmaid “cosplay” isn’t the only effort to blur the lines between fiction and reality. Dystopian analogies are all the rage these days. During the 2016 election season, the Boston Globe offered its readers a mock dystopian front page filled with alarmist headlines offering a peek into the supposedly ominous future of an America under Donald Trump. Many newspapers eagerly reported that sales of dystopian fiction such as George Orwell’s 1984, Ray Bradbury’s Fahrenheit 451, and Aldous Huxley’s Brave New World had spiked after Trump’s election win. The website Fusion featured a story titled “Trump’s America: An Illustrated Dystopia,” and Slate went so far as to launch a “Trump story project” that “invited 10 writers to imagine the dystopian future of Trump’s America.” “Even as it begins,” the introduction to the project warned, “the Trump presidency feels like an absurd and highly unlikely counterfactual.” Months into the Trump administration, the dystopian impulse continues to thrive: Universal Studios recently bought the rights to a Michael Bay-produced movie about a “Trump-like dystopia”—Little America. And the Washington Post, in an epic moment of virtue-signaling, adopted the dystopian slogan “Democracy Dies in Darkness.”

Although American culture enjoyed a boomlet of dystopian fiction aimed at teenagers during the Obama years (The Hunger Games, Maze Runner, Divergent), the most enthusiastic audience for today’s dystopian entertainments isn’t angsty tweens grappling with love in the time of the post-apocalypse; it’s adults on the left still trying to process Trump’s presidency. This is understandable. Like a never-ending presidential campaign, dystopias offer people a vicarious, cathartic experience of fear mixed with heaping doses of self-righteousness. As a coping mechanism, dystopias offer a vaguely realistic reminder of what one should fight against without the problematic need to do something about it.

But the enthusiasm for dystopias today is less about principle than it is about the left’s (excuse me, “The Resistance’s”) great conceit: that in the age of Trump, they are, like dystopic fiction’s greatest heroes, both singular truth-tellers and noble victims. Like Winston Smith in 1984, they believe that they are brave individuals daring to protest what others meekly accept, when in reality they are simply aggrieved. It’s the kind of conceit that leads journalists (such as one critic in the Atlantic who had seen The Handmaid’s Tale) to write patently ridiculous things such as “Vice President Mike Pence’s refusal to have dinner with women who aren’t his wife . . . smacks of the same kind of Puritanism that saw women condemned as witches and harlots just for the virtue of being born female.”

If the universal question every fictional dystopia poses is, “Could this happen here?” a more interesting question, given our current cultural climate, is why some dystopias are more popular than others. Why are we witnessing such enthusiasm for The Handmaid’s Tale and 1984, for example, and not Harrison Bergeron?

Historian Richard Hofstadter’s 1964 essay “The Paranoid Style in American Politics” has long served as a guidebook for liberals attempting to understand anything arising from the right. It offers some counterintuitive instruction on this question. Hofstadter described the people who embraced the paranoid style as motivated by a feeling that “America has been largely taken away from them and their kind, though they are determined to try to repossess it and to prevent the final destructive act of subversion.”

Hofstadter was writing about conservatives, of course, and he wasn’t entirely wrong in his diagnosis; conservatives tend to prefer conspiracies to dystopias, often to the detriment of their principles. And his assessment captured something of the anxiety and fierce desire for change that drove many disillusioned voters in 2016 to cast their ballots for Trump. But Hofstadter pointed out something else in the second sentence of his essay, something often (conveniently) overlooked by his acolytes on the left: The paranoid “style of mind” he described “is far from new,” he wrote, and “not necessarily right-wing.”

This observation is uncomfortably familiar for anyone who has witnessed what passes for free speech on college campuses in recent years—including the silencing of and attacks on conservative speakers, justified in the name of tolerance and campus safety. That’s why there is something stilted about the left’s contemporary embrace of dystopic works such as The Handmaid’s Tale. Reviewing the novel for the New York Times in the 1980s, the critic Mary McCarthy confessed to experiencing no “shiver of recognition” while reading the book because its dystopia was so clearly an attempt at political posturing rather than intellectual provocation. Her criticism still stands.

Why shouldn’t liberals seek solace in formulaic Hollywood dystopias? Their former political standard-bearer, Barack Obama, kite-surfs in tropical locales and collects nearly half a million dollars for a speech while their hope curdles. That’s why the most popular dystopia today is a throwback to an earlier culture war the left (correctly) felt it was on the winning side of. That fight was waged before political correctness was weaponized, when villains were easily identifiable by their Republican labels. In a way, theirs was a kinder, gentler dystopia—unlike today, when millennials who think the Ludovico Technique is something Gwyneth Paltrow would recommend for a healthy colon happily insist that violence is a justifiable response to views with which they disagree, and activists proudly tout fiction as reality. It also misses the point. The real threat from the Trump administration is already evident, and it’s not straight out of a dystopian future: It’s an incompetence that could prove far more pernicious to democratic governance than even the most overheated musings of the disappointed left. 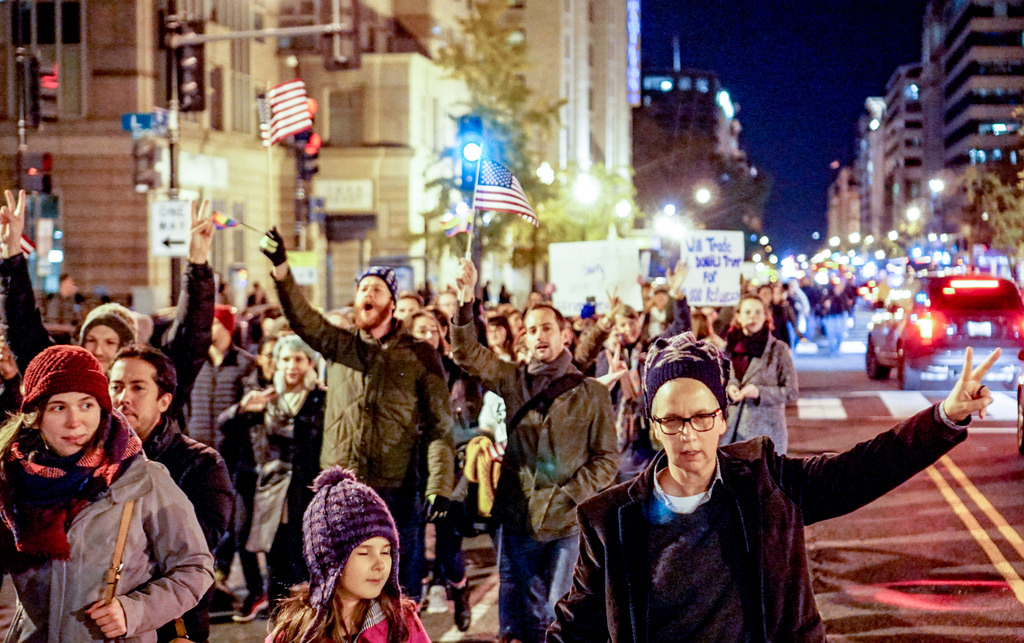