What duty do journalists have to the public when it comes to reporting on the health of politicians and political candidates? And what happens when facts about a candidate’s health belie the story the media want to tell?

In May, John Fetterman, a Democratic candidate for U.S. Senate in Pennsylvania, suffered a serious stroke. Days later, he won his party’s primary, and his wife, Gisele, appeared on stage to describe the stroke as “a little hiccup.” For weeks, his campaign released little information about his condition, and for three months he made no public appearances. The only evidence that he was in the race was his campaign’s regular trolling of his opponent, Mehmet Oz, on Twitter. He repeatedly refused to debate Oz.

So in October, when NBC News reporter Dasha Burns landed the first on-camera interview with Fetterman since the stroke, it was a big story. Fetterman’s campaign had refused to release any medical records or assessments beyond a brief statement from his doctor that he “has no work restrictions and can work full duty in public office.” But as Burns told her colleague Lester Holt on-air, Fetterman required captioning for the interview, which is not uncommon for people with auditory-processing challenges. She also noted, “In small talk before my interview without captioning, it wasn’t clear he understood what I was saying.”

This single observation proved to be an ideological trip wire. Burns instantly came under attack from journalists and Left Twitter for being “ableist” and “disgraceful.” The View’s Sunny Hostin said it was “inappropriate” for Burns to report on what she saw and that it “broke journalistic ethics.” Podcaster Kara Swisher tweeted that Burns’s experience was “just nonsense” and “maybe this reporter is just bad at small talk.” Also on Twitter, Rebecca Traister of New York claimed that “Fetterman’s comprehension is not at all impaired.” (In a profile of Fetterman, Traister compares voters asking for greater transparency from the Fetterman campaign about his medical records to “right-wing carnival barkers” and Obama birth-certificate conspiracists.) Others downplayed the seriousness of Fetterman’s condition by comparing his need for captioning to wearing glasses or contact lenses.

Disability-rights advocates were granted prime real estate in publications such as the New York Times to criticize Burns, and Buzzfeed went so far as to interview an activist who claimed that Burns’s observations about Fetterman would “worsen attitudes and violence towards disabled people.” The final piling-on came from Fetterman’s wife, who accused Burns of ableism and said, “I don’t know how there were not consequences” for what she reported. “I would love to see an apology towards the disability community from her and from her network for the damage they have caused,” Gisele Fetterman repeated a few days later.

This was all dissembling and deception. The public saw clearly during Fetterman’s only debate with Oz in late October that if anything had been damaged, it was the reputation of journalists covering for an ailing candidate they clearly wanted to win. It was painful to watch someone visibly struggle to answer questions in a live format. Fetterman began by wishing the audience a good night, and in the course of the debate consistently sounded confused and halting, notably when he was asked about fracking. He has long opposed the technology. But his response—“I do support fracking. And, I don’t, I don’t—I support fracking, and I stand, and I do support fracking”—made it impossible for anyone to make sense out of his position.

And yet, even after Fetterman’s discomfiting performance, mainstream outlets continued to churn out pieces attacking anyone who might dare to take note of Fetterman’s challenges. USA Today ran a piece claiming it was “bigotry” and “bullying” to point out Fetterman’s language stumbles. Multiple outlets again accused critics of engaging in “ableism” for asking questions about his condition. Story after story cited Fetterman’s many verbal gaffes as a “teachable moment” for the nation regarding disabilities.

It is the media that need the teachable moment, however, since it has demonstrated a highly selective memory about how these supposed rules for tolerance are applied. The “standard” is that one must accept uncritically the health claims of Democrats, lest one be labeled “ableist,” while continuing to demand full transparency from Republicans. When Tammy Duckworth ran for U.S. Senate in Illinois in 2016 against incumbent Mark Kirk, who had suffered a stroke while in office, the Chicago Tribune’s endorsement of her specifically cited the limitations Kirk’s medical condition posed for his ability to serve—even though Kirk had taken time off to recover and had been far more forthcoming with voters about his condition than Fetterman has been about his.

Further double standards can be seen in matters related to personal responsibility for one’s health. In 2016, the Washington Post published an article with the sideshow-esque title, “Just How Big Is Trump? We asked 5 experts to–you guessed it!–weigh in.” The five “experts,” one of whom was, in fact, a former “carnival guesser” of weight, proceeded to fat-shame Donald Trump and his “unhealthy complexion, puffy, pasty skin,” noting that he was also “sweating a lot.”

By contrast, few news outlets have remarked on the fact that Fetterman, who had been diagnosed with atrial fibrillation and decreased heart function in 2017 (a fact his campaign revealed only after his stroke), had not visited a doctor in five years and not taken the medications prescribed for his condition—factors that might have contributed to his stroke and that certainly bear on rational assessments of his overall judgment.

As for the charge of “ableism,” the National Center on Disability and Journalism advises reporters to “emphasize abilities, not limitations,” when reporting on people with disabilities.

However, asking questions about a candidate’s limitations as well his strengths is part of the mission of an independent press, and it allows voters to get a full picture of those vying for power.

It is not “ableist” to question whether Fetterman’s aphasia and communication challenges might affect his ability to serve. As a neurologist noted in the Wall Street Journal: “If voters can’t understand what a candidate is saying, can they trust he’ll effectively represent them? If the candidate can’t make his thoughts coherent, can he work effectively with colleagues?”

If Pennsylvania voters believe he can, and Fetterman wins, there is still the question of how his campaign handled the truth of his medical condition. No one wants Fetterman to end up a Keystone State version of Woodrow Wilson—another progressive who suffered a series of strokes, including a seriously disabling one in 1919 while president. His wife, Edith, colluded with his physician to keep his condition secret, even from his own cabinet. And like Fetterman’s wife, Gisele, Edith Wilson blamed others for the challenges posed by her husband’s poor health, claiming Republicans had caused Wilson’s stroke by opposing the League of Nations. Edith also took over many of the functions of the chief executive during Wilson’s convalescence, including signing papers with his signature (Wilson was unable to speak or move at the time).

Edith Wilson would have loved today’s media, which would eagerly have covered for her husband. The disturbing swiftness with which narratives are now established, and the vehemence with which anyone—voters or fellow journalists—is denounced if he fails to go along, will only further erode trust in the profession. As Leighton Woodhouse noted in a sharp essay in Tablet about the ginned-up controversy over Burns, Twitter became “the means by which the partisan and ideological vanguardists huddled inside the media’s fortress walls could find their ragtag armies on the outside and wage war together against disfavored colleagues.”

Questioning the lack of transparency from a candidate who has suffered a serious medical event does not make you a conspiracy theorist, and noticing a candidate’s physical limitations does not make you a bigot. For journalists, asking such questions is one of the requirements of their job. Dasha Burns did it and reaped the whirlwind from propagandists posing as journalists. She is the real deal. Her indignant critics are the ones who deserve to be shamed. 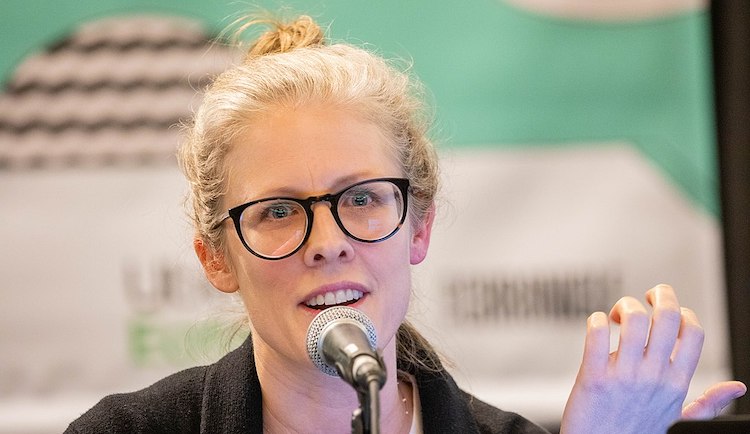