n 2004, the celebutante Paris Hilton, capitalizing on the notoriety she achieved as the star of a widely viewed sex tape, announced the creation of her own “lifestyle brand.”

At the time, the idea of marketing one’s way of life to sell purses, perfume, or video games was unusual. Today, reality television stars run small empires, and everyone with an Instagram account practices a form of personal lifestyle branding.

Even the notion of a “typical” lifestyle seems quaint in an age when people constantly broadcast their individual quirks online and when the word “typical” is itself suspect (if you’re plain-vanilla straight rather than trans-curious, for example, you’re “gender-typical”; if you don’t suffer from ADHD, you’re “neuro-typical”). Lifestyle choices of all varieties are celebrated, unless deemed politically incorrect or in any way triggering for others. Indeed, popular culture relies on such diversity; how would reality television exist without sister wives, toddler-beauty-pageant contestants, and overeaters?

Politicians, particularly those on the left, frequently cite inequality as a major problem for democracy. When she is in populist mode (that is, when she’s not being hustled onto the set of The View while carrying a $1,600 designer handbag), Hillary Clinton likes to inveigh against “income inequality.” Bernie Sanders, her rival for the party’s nomination, is more blunt: The world is a “rigged game” in favor of the rich, he says (oh, Bernie, it was ever thus). In both cases, rhetoric about economic inequality serves as political shorthand for arguments about liberal entitlements and regulation. Wealthy bad actors creating inequalities need to be relieved of their privilege through more regulation and taxation! Message: I care.

But the inequality these candidates denounce isn’t merely an economic problem. It’s a “lifestyle” problem. And it’s going to get much worse, not least because of the ideas they share and wish to implement.

Liberals who denounce economic inequality are quick to blame the lack of a social safety net and capitalism—always capitalism—for poverty, family breakdown, and its cascading social effects. Conservatives (most prominently Charles Murray) tend to emphasize character, personal responsibility, and agency, mention of which almost always prompts denunciations from liberals that they are blaming the victim. This is why our culture discourages scholars from asking tough questions about how the poor spend their time and money but praises Jane Mayer for devoting an entire book to documenting how the Koch brothers spend theirs; one is victim-blaming (and thus taboo) while the other is plutocrat-shaming, which is considered acceptable.

And yet the Jeremiahs of Inequality have embraced a lifestyle replete with precisely that message of responsibility and discipline. They send their kids to Waldorf schools, which ban high tech. They limit the screen time their children can spend with computers and televisions and spend spring break on eco-tourist retreats building their children’s résumés (oops! I mean building huts for the underserved poor). Meanwhile, the children of their less-wealthy peers are zoned out in front of the Wii waiting for a parent to return from their second job as an Uber driver. The Inequality Inveighers hire expensive consultants to get their children into the best schools and tutors to push them to the top of their classes. The other….do not.

Liberal handwringing about inequality might be well intentioned, but it obscures an endemic and unpleasant cultural NIMBYism. A racially diverse but economically homogenous private school for little Jasper is heaven—but a playdate with a kid whose parents didn’t go to college and might own a gun? Awkward.


The result is very much a society of two separate and distinct cultures. Technocratic Tiger Moms are churning out teacup kids who have internalized messages of discipline, perfection, and self-control but are also often psychologically fragile. In less well-educated families, parents struggle to find secure employment, and kids are more likely to be consuming media than engaged in the hothouse enrichment activities of their more go-getting classmates.

To put it bluntly, one lifestyle trends competitive; the other, hedonistic. And both involve individual choices about how people want to live. As argued by Michael Jindra, an anthropologist at the University of Notre Dame who is doing some of the most creative research on inequality today: “Ignoring the connection between culture and poverty is tantamount to self-censorship and indicates a basic failure of scholarship.” Jindra, unlike most of his peers in anthropology and sociology, is willing to say that these different lifestyle groups “often have different work ethics and perceptions of time and risk” and adopt very different approaches to childrearing. One practices “concerted cultivation”; the other, “natural growth.” Both approaches have benefits and drawbacks, but only one tends to lead to upward economic mobility. The seeds of perpetual inequality are being planted every day while the cause of defeating inequality is a liberal shibboleth

These different lifestyles are especially evident in the ways both groups use technology. President Obama recently admonished Americans not to “fetishize our phones above every other value,” for example, but said nothing about the fact that lower-income groups spend far more hours consuming media in the form of video games, social media, and especially television, than their higher-income peers. As has been widely reported, Obama’s own daughters have strict limits on screen time.

If the opiate of the masses is television, the opiate of the technocrats is the do-gooder tech project. Policies such as providing One Laptop Per Child; installing Wi-Fi in schools; providing coding camps for the underprivileged—these are among the countless efforts to bridge the so-called tech divide that emphasize access to hardware while ignoring the equally important soft skills of culture and behavior. This is why, as Jindra and many others have noted, pilot programs that provide computers or iPads to low-income children are often counterproductive. Absent the behavioral norms that the parents of their wealthier peers enforce, these kids end up spending time playing video games, not reaping the benefits of educational technology.

And it’s not just technology. Liberal concern about inequality is far too easily assuaged by Potemkin diversity. As Jindra notes, we prefer superficial discussions of diversity to tougher debates about behavior and norms. As a result, we get diversity based on “an outmoded belief that racial/ethnic groups define diversity, when intragroup differences are often larger than intergroup differences.” In other words, liberal handwringing about inequality might be well intentioned, but it obscures an endemic and unpleasant cultural NIMBYism. A racially diverse but economically homogenous private school for little Jasper is heaven—but a playdate with a kid whose parents didn’t go to college and might own a gun? Awkward. Everyone’s a liberal until the neighbors decide to install a doublewide trailer and a pit bull on that plot of green space next to your tastefully renovated bungalow.

Giving poor kids free iPads and Internet access and sending them to coding camp so they’ll grow up to become successful Google employees is a much nicer story for techno-liberal elites to tell themselves, all the while grooming their own offspring for a level of success unavailable to those who aren’t raised to delay gratification or practice the human-capital skills required for achievement in today’s economy.

“The trend toward lifestyle diversity will only get more intense as technology and individualism increasingly give us the ability to go off in different directions (and, generally, take our kids along with us),” Jindra argues. One of Hillary’s favorite campaign slogans, “fighting for us,” begins to take on quasi-Orwellian undertones in this context. And judging by the history of recent social policy, tolerance for lifestyle diversity ends when that tolerance produces unhealthy or unproductive (or politically incorrect) behaviors. The historian Jacob Burckhardt once called the modern age one of “brutal simplifiers.” He was talking about tyrants, but he might as well have been talking about lifestyles. 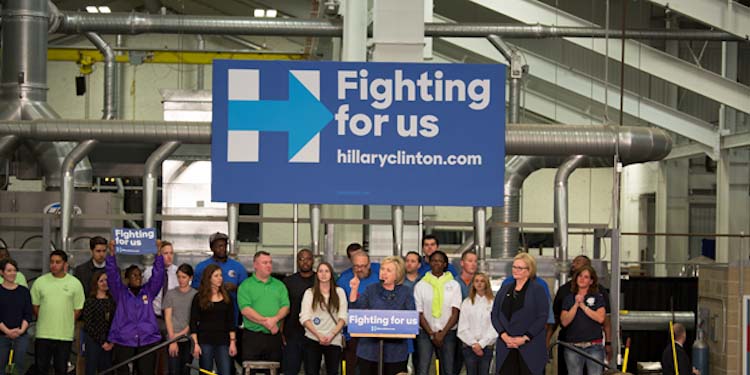