In late August, when riots erupted in Kenosha, Wisconsin, CNN featured a reporter standing in front of a burning car lot above a chyron that read: “Fiery but mostly peaceful protests after police shooting.” The use of the chyron was striking in its peculiar earnestness, considering that the words “mostly peaceful protest” had long since become a bitter in-joke for right-leaning social media. Indeed, from the moment the first protests began in late May, mainstream media outlets have downplayed or ignored instances of violence or destructive looting. On May 29, MSNBC’s Ali Velshi was reporting from Minneapolis in the aftermath of the killing of George Floyd when he insisted he was seeing “mostly a protest” that “is not, generally speaking, unruly” despite the fact that he was literally standing in front of a burning building at the time.

Yet Velshi was hesitant to ascribe blame to the arsonists and looters. “There is a deep sense of grievance and complaint here, and that is the thing,” he explained. “That when you discount people who are doing things to public property that they shouldn’t be doing, it does have to be understood that this city has got, for the last several years, an issue with police, and it’s got a real sense of the deep sense of grievance of inequality.”

Reporters such as the New York Times’ Julie Bosman openly struggled to describe what happened in places like Kenosha by using words like “riots” or “violence.” “And there was also unrest. There were trucks that were burned. There were fires that were set,” Bosman said, relying on the passive voice in an appearance on The Daily, the Times’ podcast. “People were throwing things at the police. It was a really tense scene.” So tense, in fact, that the next night, when protestors clashed with volunteer militia members and a 17-year-old named Kyle Rittenhouse shot three of them, killing two, Bosman wasn’t there to cover it. “It felt like the situation was a little out of control. So I decided to get in my car and leave,” she explained.

Why would a Times journalist need to flee from a “mostly peaceful” protest?

A few days after his network’s “mostly peaceful” chryron, CNN’s Chris Cillizza tweeted, “Trump’s effort to label what is happening in major cities as ‘riots’ speaks at least somewhat to his desperation, politically speaking.” Cillizza then linked to a CNN story whose featured image was a police officer in riot gear standing in front of a burning building in Kenosha. In July, NBC’s local television station in Oakland featured a headline that read: “Group Breaks Off of Mostly Peaceful Protest, Vandalizes Police Station, Sets Courthouse on Fire.” On June 3, the Wisconsin State Journal in Madison actually ran this headline: “Third night of looting follows third night of mostly peaceful protest.”

Despite the media’s strenuous effort to downplay their existence, the destructive riots and looting this summer were easily found by anyone willing to look. Six weeks into the summer’s protests, independent journalist Michael Tracey drove across the country documenting them. As he wrote in the UK digital magazine, Unherd: “From large metro areas like Chicago and Minneapolis/St. Paul, to small and mid-sized cities like Fort Wayne, Indiana, and Green Bay, Wisconsin, the number of boarded up, damaged or destroyed buildings I have personally observed—commercial, civic, and residential—is staggering.” Andy Ngo and other nonmainstream types have spent months documenting the destruction in cities like Portland and Seattle. And yet, the “peaceful protest” mantra has remained ubiquitous.

Moreover, when media outlets did acknowledge protest-related violence, they often implied that it was instigated by the members of law enforcement sent to respond to it. In a roundup about protests on a single day in early June, for example, the New York Times featured headlines such as “Police crack down after curfew in the Bronx” and “Police use tear gas to break up protest in Atlanta.” Later that month, the New York Times featured a tweet thread with video of protests in Seattle that included images of police in tactical gear and the statement: “Officers dressed for violence sometimes invite it.”

Some journalists sought not to deny that violence was happening, but to engage in whataboutism regarding its effects. GQ correspondent Julia Ioffe tweeted, “So in case you’re keeping track, being very frustrated by the continual and unpunished killing of Black people by police that you decide to burn and loot—bad. If you’re so frustrated by some protesters burn and loot that you decide to kill some of them—totally understandable.”

Reporters invested in the “mostly peaceful” narrative mocked people who were concerned about increases in violent crime and civil unrest. In September, CNN correspondent Josh Campbell tweeted a bucolic scene from a park in Portland and wrote, “Good morning from wonderful Portland, where the city is not under siege and buildings are not burning to the ground. I also ate my breakfast burrito outside today and so far haven’t been attacked by shadowy gangs of Antifa commandos.” At that point, nearby parts of the city had been effectively under siege by antifa and Black Lives Matter rioters for months, and a protestor had recently shot and killed a Trump supporter in cold blood.

Paul Krugman of the New York Times joined in, tweeting, “I went for a belated NYC run this morning, and am sorry to report that I saw very few black-clad anarchists. Also, the city is not yet in flames…claims of urban anarchy are almost entirely fantasy.”

Worse, journalists committed to the “mostly peaceful” narrative have targeted fellow journalists who don’t fall into line with the messaging. The most outrageous example came when the Intercept’s Lee Fang was denounced on social media as a racist by fellow staffer Akela Lacy after he reported on communities of color negatively affected by the rioting and looting. Lacey described Fang’s reporting as “continuing to push racist narratives” when Fang allowed a black resident of a looted neighborhood to raise concerns about the damage. Fang was forced to apologize.

The journalists who attempt to explain away or justify the violence that erupted during some protests do so because they believe the cause is righteous. As E. Alex Jung of New York magazine argued, “the entire journalistic frame of ‘objectivity’ and political neutrality is structured around white supremacy.” How can a good journalist do anything but promote a narrative sympathetic to protestors supposedly fighting it? Needless to say, such justifications and excuse-making would never happen if pro-life or pro–Second Amendment protestors turned to looting and violence.

The problem with such ideologically motivated narratives is that, once crafted, they require strenuous effort and often outrageous contortions to maintain. Ultimately, they have the effect of legitimizing extremism and lawlessness, which undermine whatever cause the majority of protestors who don’t partake in violence are promoting. It’s also offensive to those who must suffer the costs of the destruction. One assessment by the Andersen Economic Group of just one week of rioting and looting in major cities (from May 29 to June 3) placed the costs of the destruction at $400 million, an estimate that did not include the costs to state and local governments or the damage done in smaller cities and towns.

Social scientists swooped in to try and save the day for the “mostly peaceful” argument. A report by the Armed Conflict Location and Event Data Project, issued in September in partnership with Princeton University’s Bridging Divides Initiative, concluded that 93 percent of the summer’s protests were peaceful. The ACLED had made its agenda clear in June, when it issued a statement of solidarity with the same protests its report purports to analyze and called for “systemic and peaceful change.” Nonetheless, the report cannot suppress the facts it gathered; by the researchers’ own estimates, there were more than 500 violent riots related to Black Lives Matter gatherings across the country this summer.

But at least the others were “mostly peaceful.” 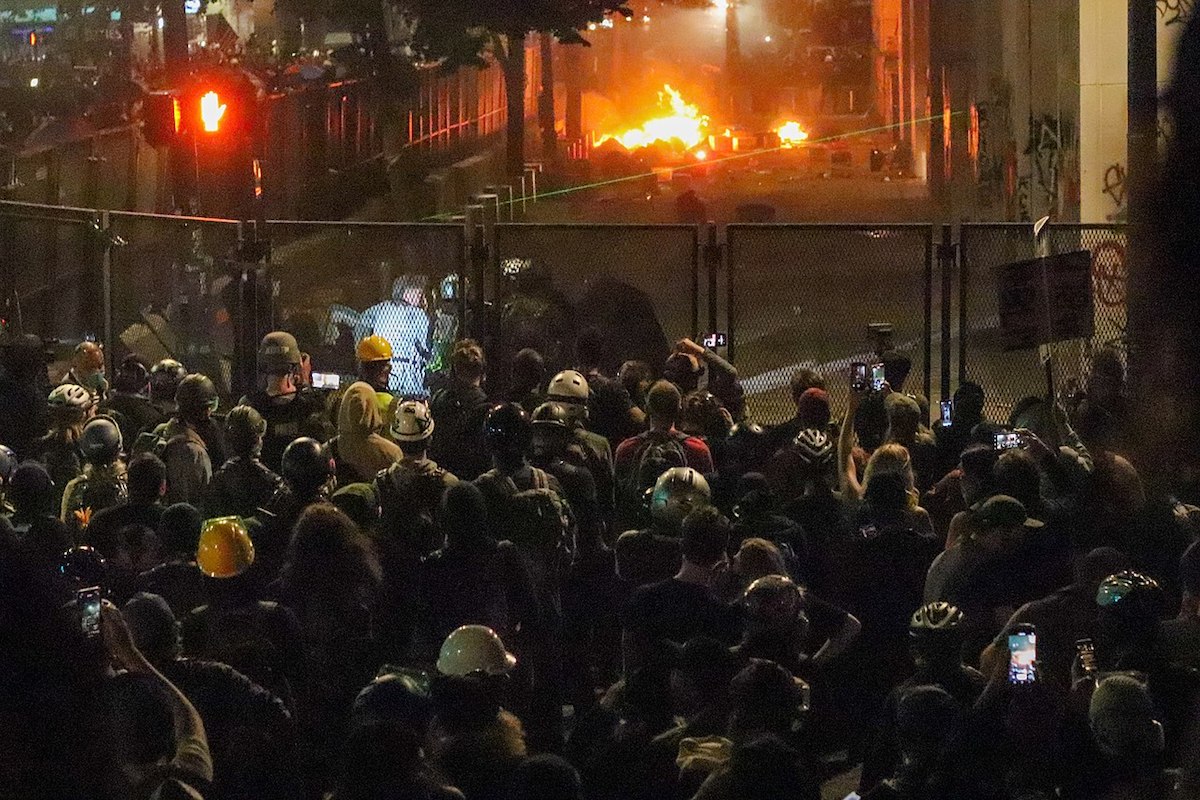