Control the narrative and you control the consequences—that is the operating assumption of America’s political and cultural elite these days. It’s a strategy that works so long as the media play along and facts don’t undermine the feelings that the narrative feeds. Remember actor (and outspoken anti-Trump tweeter) Jussie Smollett? He told a story that a lot of people on the left wanted to believe—namely, that racist, homophobic white men in MAGA hats were roaming the streets of Chicago randomly attacking people like him. To those who expressed doubts about the story, Jussie supporters questioned their motives (and threw around accusations of racism). It was only weeks later, when Chicago police made the dominant narrative impossible to believe by arresting Smollett for perpetrating a hoax, that the original victim narrative collapsed.

In the case of Representative Ilhan Omar, the House Democratic freshman from Minnesota whose anti-Semitic remarks put Democratic leaders on the defensive just as they regained their majority, the narrative arc appears unlikely to bend toward anything remotely like justice. On the contrary, Omar has emerged from repeated controversies unrepentant and more powerful than before (and retaining her seat on the House Foreign Affairs committee). She and her progressive Democratic supporters did this by changing the narrative about the Democratic party and anti-Semitism—and not for the better.

Omar, who supports the BDS movement, accused Israel of “hypnotizing the world” and has repeatedly invoked classic anti-Semitic themes about Jewish influence, money, and “dual loyalty.” She has only offered sorry-not-sorry false “apologies” for her words. In March, Omar’s House colleagues failed to pass a resolution condemning her most recent expression of anti-Semitism, opting instead to pass an identity-politics laundry list masquerading as a resolution that condemned all “isms” and failed utterly to hold Omar accountable for her anti-Semitism.

The day after the resolution passed, a new apologia for anti-Semitism issued from the mouth of House speaker Nancy Pelosi at the Economic Club in Washington, D.C. “I don’t think our colleague is anti-Semitic,” Pelosi said. “I think she has a different experience in the use of words, doesn’t understand that some of them are fraught with meaning, that she didn’t realize.” Representative Jan Schakowsky picked up the theme, telling MSNBC that Omar “comes from a different culture—she has things to learn.” In other words: Like a misguided toddler who didn’t know any better, Omar should be excused for trafficking in age-old, hateful anti-Semitic stereotypes.

It’s an especially ironic narrative for staunch feminists like Pelosi, given how patronizing and sexist the same remarks would have sounded coming from a man (or from any Republican). Omar’s supporters are arguing that Omar is too inept to understand what she is saying—and yet they still granted her a position on the powerful Foreign Affairs Committee? It’s equally absurd to argue that someone who has been in the United States since the age of 12 and is now nearly 40 years old just hasn’t had enough time to learn our unique American cultural mores with regard to anti-Semitism.

Omar traffics in well-known anti-Semitic tropes, and she knows they are anti-Semitic. We know she does because she has already had several “listening and learning” sessions with Jewish leaders from her congressional district and national organizations about precisely those stereotypes. Many of those leaders expressed surprise that Democrats were treating Omar’s most recent expression of anti-Semitism as if it had been a minor gaffe by a political ingénue rather than as part of a pattern of prejudice from a grown woman who knows exactly what she is signaling when she says these things. Everyone else seems to know what she’s saying—after all, KKK Grand Wizard David Duke tweeted his praise for Omar, calling her “the most important Member of the U.S. Congress.”

In addition to treating Omar like a child, the Democratic narrative insists we recognize that she is also a victim—in fact, more of one than the people she is attacking because she is Muslim and is supposedly challenging the foreign-policy status quo with regard to Israel. It is true that Omar has been the target of anti-Muslim bigotry, most recently from the scurrilous lips of Fox News host Jeanine Pirro. But she is the creator of the controversies that surround her, not the target.

Nevertheless, Representative James Clyburn offered the outrageous opinion that Omar’s victim status trumped that of Jews because she once lived in a refugee camp. “There are people who tell me, ‘Well, my parents are Holocaust survivors.’ ‘My parents did this,’” Clyburn said. “It’s more personal with her.” It’s evidently personal for many of Omar’s supporters, too. Fellow Muslim congresswoman Rashida Tlaib was recently found to have been following an Instagram account that depicted Jews as rats and vampires and compared Israel to Nazi Germany. So much for casual anti-Semitism. This is let-it-all-hang-out anti-Semitism, and it’s the new face of the Democratic Party.

Not all of Omar’s constituents are pleased about this. As one told the Minneapolis Star-Tribune, “Is she just going to blurt every thoughtless, bigoted, agenda-derailing thing that pops into her head and then conduct the Fifth District’s business in the middle of that toxic cloud?” Another constituent wrote to the New York Times: “As a longtime resident of Minnesota’s Fifth Congressional District, and as someone who voted for Ilhan Omar, I now have some advice for her: Sit down, keep quiet for a while and learn your job. I don’t want to see your picture or any article about you in the New York Times again until the news is about something substantive like … umm … legislation.”

They are right to be concerned. But their view is not prevailing. Democratic presidential candidates for 2020, such as Bernie Sanders and Elizabeth Warren and Kamala Harris, actually defended Omar. When asked during a CNN Town Hall at the South by Southwest conference if she believed Omar’s statements were anti-Semitic, Representative Tulsi Gabbard (another presidential aspirant) hedged: “Well, let’s look at the bigger issue here . . . as members of Congress and people in this country making sure we can have open dialogue about our foreign policy.” When pressed again about whether or not Omar’s specific statements were anti-Semitic, Gabbard doubled down: “There were people who expressed their offense at these statements. I think what Congresswoman Omar was trying to get at was a deeper issue related to our foreign policy. . . . We’ve got to be able to have that openness to be able to have that conversation.”

If this is the new standard, then every racist thing Donald Trump has ever said about immigrants is immune to criticism because he can claim he was just encouraging “openness” and “conversation.” As Dean Phillips, a fellow Democratic freshman (and moderate) from a nearby Minnesota district lamented to Politico, “suddenly an entire party is being branded by the perspectives of two of its members [Omar and Alexandria Ocasio-Cortez] who represent 1 percent of the caucus.”

That’s how narratives work. The progressive wing of the Democratic Party—including anti-Semitic Omar and her defenders—has succeeded in reverse-mentoring their elders. And unless Nancy Pelosi regains her senses and quietly identifies and supports a primary challenger for Omar in 2020, the Democrats risk making the “different experience in the use of words” of anti-Semites like Omar a permanent stain on their party. 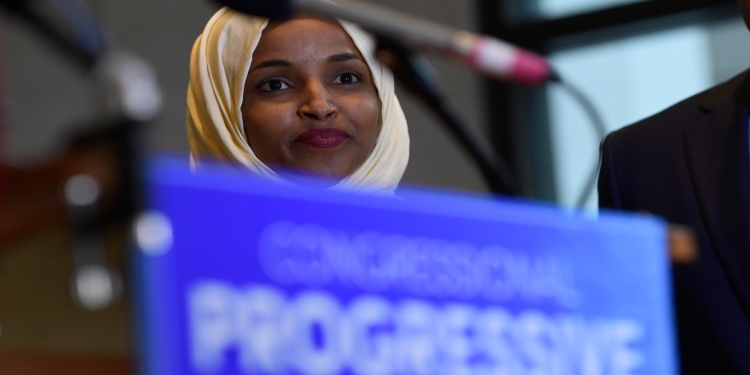