he United States has repeatedly been surprised by major developments in Asia, sometimes catastrophically so. Think Pearl Harbor after the intelligence failures later documented by the historian Roberta Wohlstetter. Or the victory of Mao Zedong’s Communists in the Chinese civil war, despite years of U.S. aid to the rival Nationalists. Or the Korean War, started by Kim Il Sung after U.S. Secretary of State Dean Acheson delineated a U.S. “defensive perimeter” that excluded South Korea. Or Vietnam. Or, a mere two generations after Nixon went to China, the rise of a Chinese superpower competitor from the depths of Maoist misery. 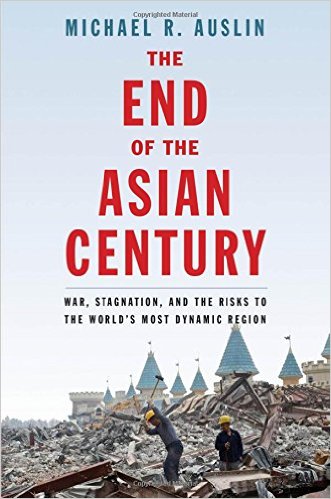 The End of the Asian Century

Michael R. Auslin’s The End of the Asian Century seeks to prevent Americans from again being surprised by the disruptions that still might come in Asia. Part of the challenge is that so much news from the region in recent decades has been good. The U.S. hasn’t fought a war there since 1975, and no two Asian states have fought in earnest since the China-Vietnam border war of 1979. The Philippines, South Korea, and Taiwan democratized peacefully in the 1980s, as did Indonesia after 1998. Meanwhile more than 500 million people have lifted themselves out of poverty, largely since China embraced partial economic liberalization in 1978 and India followed in 1991.

This run of Asian progress has generated considerable optimism among policymakers, investors, and voters in the West, especially compared with the dysfunction of Europe and chaos of the Middle East. But complacency has set in, too, says Auslin, a scholar at the American Enterprise Institute. He warns that Asia “is riddled with unseen threats, from economic stagnation to political unrest and growing military tensions.” Even as China’s rise has become too aggressive for Americans to ignore, headlines about ISIS and Russia mean that “only cursory attention is being paid to Asia’s dangers.” In a 2015 Pew poll, Asia wasn’t among Americans’ top 23 public-policy priorities.

Auslin structures his book as a tour across a conceptual “risk map” of regions representing Asia’s key challenges. He is a compelling guide throughout, conveying that Asia’s knottiest problems transcend the borders of its multifarious individual states. The first danger zone is failed economic reform, which threatens countries rich and poor, democratic and authoritarian.

China, long an engine of regional and global economic growth, is now slowing down and trying to engineer a delicate transition from heavy industry toward services, yet it refuses to kick its post-2008 debt addiction or abandon its state-led “house-of-cards capitalism.” China has more than 100 companies on the Fortune 500 today (nearly as many as the U.S.), up from only three in 2002. But most are state-owned behemoths that function less as competitive enterprises than political patronage networks. Exposing them to more market discipline would cause job losses and other headaches Beijing would rather avoid, so wasteful investment continues even as the country has less ability to fund it.

Japan still has the world’s third-largest economy, but it courts continued stagnation by failing to open major industries to foreign competition and refusing to liberalize labor and immigration policies. South Korea and Taiwan have some of the same problems, while less-developed economies in India and Southeast Asia face more basic reform needs, from cutting state ownership of industry to enforcing contracts and attracting foreign investment.

The fading of the Asian economic miracle looms especially large because Asian countries face what Auslin calls a “Goldilocks” demographic crisis: “either too many people or too few.” A new era of sluggish growth would deny opportunity to hundreds of millions of young Indians, Indonesians, and other Southeast Asians, while squeezing the wealth of aging Chinese, Japanese, South Koreans, and others. Either effect could trigger political instability, especially in countries where popular frustration isn’t channeled democratically.

Serious as these risks are, Americans witnessing political earthquakes at home and across Europe can be forgiven for overlooking China’s debt-to-GDP ratio or India’s regulatory woes. What demands greater consideration, though, are Asia’s fast-rising risks of armed conflict.

“The rapid transformation of Asia’s security environment threatens to undo the work of decades,” Auslin writes, citing as watersheds North Korea’s first nuclear test in 2006 and China’s escalation of territorial bullying against the Philippines in the South China Sea and against Japan in the East China Sea in 2012. For the first time in modern history, Asia now spends more than Europe on military budgets. The region is awash in shopping malls and submarines, the strategist Robert Kaplan noted in 2014. “What is it,” Auslin asks, “that Asians fear so much?”

The answer is China—a China, Auslin notes trenchantly, that has pursued the most dramatic peacetime military modernization program ever, comparable only to America’s buildup during World War II. “This is despite Washington’s ongoing efforts to integrate China into the global economic and political order, and in the absence of any obvious external obstacles to China’s growth.” China claims it has acted as any rising power would, to build defensive capabilities commensurate with its growing interests in Asia and beyond, but Auslin shows otherwise, noting that “China’s actions have become steadily more coercive and threatening the stronger it has become.”

Auslin recommends a raft of sensible policies to help keep the peace, including more U.S. firepower in the region and more cooperation with allies. He also underscores the importance of expanding free-trade links and supporting liberal political institutions where they are lacking.

He suggests that the U.S. complement its traditional Asian alliances by deepening ties with countries that sit along two concentric triangles. The outer triangle spans the continent, linking Japan, South Korea, India, and Australia, all powerful democracies. The inner triangle spans the South China Sea, linking the Philippines, Indonesia, Malaysia, and Singapore, a more diverse crew. Via diplomatic exchanges, “joint maritime patrols in sensitive waterways,” and other efforts, Auslin argues, the U.S. can bring these triangles together and seek to cultivate common rules and norms that “increase transparency, build trust, and make it easier to defend the maritime and aerospace commons.”

Auslin fleshes out a helpful framework with thoughtful specifics, but his case underplays a key question: Are China’s neighbors willing to sign up for a counter-China bloc worthy of the name? They’re all spooked by Beijing’s bullying, to be sure, and in private they’ve begged the United States to push back harder. Yet in public they hedge, dodge, and even criticize modest forms of U.S. pushback such as maritime patrols, all for fear of angering Beijing and suffering economically. This is a Goldilocks dilemma of a far graver sort.

“It is of little use to argue that the goal of this strategy is not to contain China,” Auslin acknowledges, yet he asserts that “there are numerous ways to do this without threatening any nation’s sense of security or making it feel it has to choose between the United States and China.” If so, then the future of the liberal international order in Asia is brighter than it often seems. Alas Auslin offers little evidence, and recent years inspire little confidence.

Another dilemma: If Westerners so often misunderstand Asia, how likely are American leaders and voters to come around, reassess the situation, and chart a better way forward? Certainly this book can help. But the many cultural, historical, and ideological factors that obscure U.S. thinking about Asia won’t be easily overcome.

Asia remains strikingly foreign to the American consciousness. Compared with Europe, few Americans trace their lineage to Asia, speak its languages, or know its basic history. American journalists, diplomats, and military officers are far more likely to have made their careers in Germany or Iraq than in Japan. The Trump administration, like many before it, has few senior officials with significant Asia backgrounds. This shapes official assessments of risk, including the common view that modern states won’t really fight over a bunch of rocks at sea. “But to dismiss the possibility,” warns Auslin, “would be a dangerous mistake.”

Of Americans with experience in Asia, a disproportionate number are businessmen. This doesn’t dictate how they’ll think about the risks of war, but it suggests that happy stories of economic miracles are more familiar than, say, harsh tales of anti-American or anti-Japanese indoctrination at the Communist Party schools that train China’s military and political leaders.

Which is all the more reason to appreciate Michael Auslin’s timely reality check. Americans may not be interested in Asia’s growing problems, but Asia’s problems are interested in us.

David Feith is an editorial writer for the Wall Street Journal based in Hong Kong.

Xi Who Must Be Obeyed

The Three Ways We Get China and Its Neighbors Wrong