lliot Jager’s new book has a particularly provocative subtitle: “My Father, My Judaism, My Childlessness.” The kicker there is at the end, of course: childlessness. Both father and Judaism somehow imply children. Jager’s trinity seems to stop us in our tracks. These days, there is a popular genre of writing about people who come to understand their parents through their own experiences raising children, not through an absence of offspring. And Judaism, with its first commandment to “be fruitful and multiply,” its anxiety about numbers and continuity, and its central prayer, the shema, commanding us to “teach these words to our children”—Judaism doesn’t merely imply progeny. It obsesses on it. 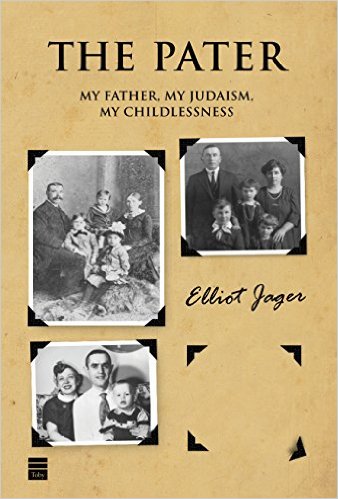 What, then, does it mean to be a learned, searching, married Jew who is unable to have a child?  One of the accomplishments of Jager’s engaging book is that he has thought through that question—even felt through it—from almost every conceivable angle.  Jager, An American-born journalist living in Israel, had a traditional upbringing that allows him to comb Jewish literature with ease and arrive at insights that are both shrewd and disturbing. To find answers, he also seeks out Jewish scholars, explores the sociological literature, and invokes everyone from Camus to Mother Ann Lee, the founder of the Shakers in America.

In Israel, a nation that leads in both scientific advances and childbearing, the in vitro fertilization failure rate is ‘a staggering 75 percent.’


The Pater is not an anthology of wisdom, however, but the record of a journey. Jager’s meditations on his childlessness are spun around the story of his relationship with his father, who abandoned his family not once but twice. After the second disappearance, 30 years passed before Jager saw or spoke to his father again. When he did, his father was full of recommendations to cure his son’s childlessness. The irony was painful for Jager, and for us.

Jager’s ruminations alternate between anguish, reflection, and wry lament.  “If you’re feeling forlorn on a Saturday night—and want to keep it that way,” he writes, “here’s a movie streaming suggestion: Children of Men.” In addition to that droll reflection on a film about a world in which no one has had children for a half-century, Jager offers up some surprising statistics that help quantify childlessness in general. In America, about 20 percent of women will never have children. The birthrate fell by 6 percent between 2007 and 2010 among U.S.-born women. And for those who are trying to get pregnant with medical help, the results are not as encouraging as we may think. In Israel, a nation that leads in both scientific advances and childbearing, the in vitro fertilization failure rate is “a staggering 75 percent.”

We read about the ordeal of the Jager family’s unsuccessful attempts to get pregnant: the treatments, the disappointments, and the stunning expense. Above all, there is the emotional toll of defeat. Jager ultimately abandons his religious orthodoxy as a sort of “reprimand to God.” If the Jewish tradition is about children, and God refuses to cooperate, how can one maintain reverence? Jager’s urge to reprove God is more deeply understood when one considers the Talmudic attitude toward his situation. Rabbi Joshua ben Levi says, “A man who is childless is accounted as dead,” quoting the matriarch Rachel who said, “Give me children or I am dead.” What must such texts mean to a woman or man who cannot conceive?

Jewish tradition, however, has its consolations—even if they don’t always manage to soothe. The full sting of Jager’s discouragement is felt in the title of one particular chapter: “The Small Matter of the Meaning of Life.”  While Judaism instructs that teaching someone is equivalent to giving birth to him, Jager notes that many people say it is having children, more than anything else, that gives their own lives meaning.

We know there are many ways to contribute to the world, and there are far fewer people who can paint or write than can conceive a child. And as the critic Cyril Connoly pointed out, the most formidable obstacle to great writing is “the pram in the hall.” Some argue, therefore, that artistry should trump biology when it comes to creation.

Such arguments have an unending quality to them, and The Pater does not tie up the matter with a bow. Rather it leaves readers with Jager’s pain and questioning. There is pleasure to be found at the depth of the Jewish tradition, but also anguish over its smug certainties. In the end, perhaps the book is the author’s stand-in creation, not a biological descendent but undoubtedly an instrument for passing on knowledge. Jager may not have a child but he has enabled those who do have children to understand better the trials of the childless, and he has given both voice and comfort to others like himself.

David Wolpe is the senior rabbi of Temple Sinai in Los Angeles.