arry Golden was one of mid-century America’s great characters–a hustling Wall Street ex-con who crusaded for civil rights in his idiosyncratic little Southern newspaper, the Carolina Israelite. He wound up drinking champagne with Adlai Stevenson, being cited by Martin Luther King in his “Letter from the Birmingham Jail,” and swapping quips with Johnny Carson on The Tonight Show–a true, if evanescent, pop-cultural star. 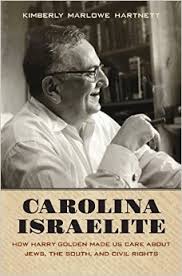 Golden, who died at 79 in 1981, is all but forgotten, but he’s worth a cameo these days when Jews and blacks are more often than not at odds on race. Despised by fervid segregationists, deemed an embarrassment to assimilated Southern Jews, derided as inadequately militant by ’60s agitators and black radicals, Golden was as much tummler as journalist, the stereotypical clever, ingratiating Jew who jollies the goyim into doing the right thing. Now, he is the subject of a brisk, thoroughly researched, and mostly admiring biography by Kimberly Marlowe Hartnett. Her book, Carolina Israelite, both elevates Golden as a courageous, effective voice on the major issues of his time and diminishes him with its portrait of Golden as a corner-cutter and facile self-promoter. Golden played the maverick–the refugee New Yorker transplanted in the cornpone South, polemic journalist, son of a Hebrew scholar married to a Roman Catholic, champion of the oppressed, union man, cigar-chomping, bourbon-slugging pal of intellectuals and politicians. Actually, he was a Kennedy-era liberal, more committed to civil rights than the Kennedy administration but in sync with Democratic Cold War foreign policy. Indeed, Golden’s prime–the years from the publication of his best-selling Only in America in 1958 to the election of Richard Nixon a decade later–coincides with the postwar Democratic ascendancy that died in the jungles of Vietnam.

“Today, somebody with Golden’s skill would be a cable-channel pundit and prolific blogger,” the author smartly observes. He was the master of the jokey insight that sounded absurd but delivered a fresh way of thinking about an old issue. A prime example was his “Vertical Negro Plan.” White Southerners, he reflected, wouldn’t share public facilities with blacks but didn’t object to standing next to them on line at the bank or grocery store. So all lawmakers had to do to desegregate the school was remove the classroom chairs, leaving only the desks. “Since no one in the South pays the slightest attention to the vertical negro,” he wrote, “this will completely solve our problem.” He also had a “Golden Plan to Eliminate Anti-Semitism.” This involved all American Jews joining Christian churches, mostly Episcopal and Presbyterian, whereupon the churches’ fancy Gentiles would form a strong anti-defamation league: “They would go from door to door whacking anti-Semites on the head: ‘Shh, you don’t know what you are saying.’”

He had great fun with Barry Goldwater, an Episcopalian whose grandfather was Jewish. When Goldwater ran for president against Lyndon Johnson in 1964, Golden called him an “amateur Christian” and winked: “I always knew the first Jewish president would be an Episcopalian.” However glib, Golden’s apercus could take knotty questions and smooth them down into simple truths. “John F. Kennedy was an idea to the people of the United States,” he said a month after the assassination, “an idea of what we could become.”

Starting in 1944, Golden filled the plain columns of the Carolina Israelite with short essays, editorials, and reminiscences of growing up poor in a pious family on the Lower East

Golden worked as a clerk at his brother’s theatrical hotel and dabbled in various go-broke-quick schemes, including a Broadway musical featuring an all-midget cast. One day in the early 1940s, he changed his surname, headed south, and Harry Golden’s new life began.

Side. Over the years, he repurposed the stuff into a series of books beginning with Only in America, which stayed on the New York Times bestseller list for more than a year and made him enough money to pay off many of his old debts. More than a dozen other books followed, including an autobiography and studies of Jewish peddlers and the case of Leo Frank, the Jewish factory manager who was accused of murdering a young woman and lynched by a white mob in Marietta, Georgia, in 1915. He wrote for important magazines, too, including Life, Esquire, the Nation, and Commentary. All that exposure led to lucrative work on the side as a lecturer and frequent appearances on The Tonight Show couch, with Jack Parr and then Johnny Carson.

Golden scavenged his early life for material, but he kept some of it to himself. Born in a Galician shtetl, little Chaim (later Hershel, then Harry) Goldhirsch (later Goldhurst, finally Golden) was brought to New York after the turn of the century by his father, who had been a teacher in the old country. He sold papers as a street urchin, read books at a settlement house, went to night school, and followed one of his sisters to Wall Street in 1926. There, he set up a bucket shop, a pre-Madoff con in which the broker manipulated the holdings of his clients, including a Southern Methodist bishop, to his own benefit–a scheme that worked until the broker guessed wrong and the firm went bust. Caught, he was sentenced to five years in federal prison just before the market collapsed on Black Monday.

Paroled after three years, he worked as a clerk at his brother’s theatrical hotel and dabbled in various go-broke-quick schemes, including a Broadway musical featuring an all-midget cast. One day in the early 1940s, he changed his surname, headed south, and Harry Golden’s new life began.

He settled, fortuitously, in Charlotte, North Carolina, a thriving, reasonably enlightened city far from the Jim Crow bastions of Mississippi and Alabama and got a foothold by selling advertising for a labor journal. Soon, he was contributing punchy editorials to the paper and introducing himself to Charlotte’s leading Jewish businessmen, who ultimately wound up financing the Israelite. But Golden was always pursuing other money-making fantasies, including hawking Midas Mineral Water, whose source, he confessed later, was actually “a faucet in a deserted shack of a bankrupt ginger-ale company.”

olden was caught kiting checks in Birmingham, Alabama, as part of another scam. He got off with five years probation, and his new patrons in Charlotte never made the connection because he was arrested using the name “Goldhurst.” Golden’s past was finally exposed by an anonymous tipster soon after Only in America came out. But the first story, in the New York Herald Tribune, was sympathetic to Golden, and with the support of influential friends such as the poet Carl Sandburg and Adlai Stevenson, he not only rode out the storm but emerged more famous and popular than ever.

In fact, cultivating important people was the Golden rule. Stevenson was so taken with Golden’s speechwriting suggestions during one presidential campaign that he asked him up to his hotel room for a nightcap. He was invited to the White House by JFK, and got genuinely close to Robert Kennedy, who asked for a signed copy of Only in America, to which Sandburg had contributed a foreword. He worked hard for the doomed 1968 campaign of Hubert Humphrey, who wrote him affectionate notes. Dave Garroway, the first host of The Today Show, was a chum, too, as were many of the top Southern newspaper editors of the time, from the liberal Harry Ashmore in Little Rock to the unreconstructed segregationist James Jackson Kilpatrick in Richmond.

Still, the times and the political winds turned against Golden as the 1960s wore on. For all his sympathy for Freedom Riders and working people, Golden was no bleeding heart. He subscribed to the domino theory and thought Lyndon Johnson had no choice but to pursue the Vietnam War–which led to painful friction with the emerging liberal elite. Black-power radicals such as Stokely Carmichael and H. Rap Brown had no use for Golden’s meliorist nostrums (or, in Brown’s case, the Jews).

Even earlier, some Jewish intellectuals, many of whom had ignored him or tolerated him as an amusing lightweight, tried to shame him out of the congregation. In an 8,000-word indictment in this magazine, Theodore Solataroff concluded that Golden was a sentimental apologist for Lower East Side poverty and southern segregation and unduly optimistic about social progress. Worse, according to Solotaroff, his stories weren’t funny, just silly. And Golden contradicted himself: “Here he tells us that our society is in trouble–it is bored, materialistic, frivolous, apathetic; there he tells us that this or that sturdy accomplishment or democracy or social progress could happen only in America.” Golden, he concluded, “represents…a society characterized by its well-intentioned but soft, sloppy equivocal thinking about itself.” Philip Roth seconded the motion in American Judaism.

Golden shut down his paper in 1968. Magazines began sending him kill fees rather than big checks for his pieces, and his book publishers finally lost patience with his penchant for recycling old material in new covers. He’d grown tired, and so had his act. For all his pronouncements on the great ideas of his time, Golden was essentially an entertainer–a kind of haimishe Will Rogers. As his biographer rightly concludes, “When America most needed Golden, he was on stage.”

He can also be thought of as a successor to those peddlers he evoked in one of his later books–scuffling Jews laden with packs who tramped through the South hustling their merchandise. Instead of pots and pans and needles and thread, Harry Golden peddled his own notions. His book was called Forgotten Pioneer. 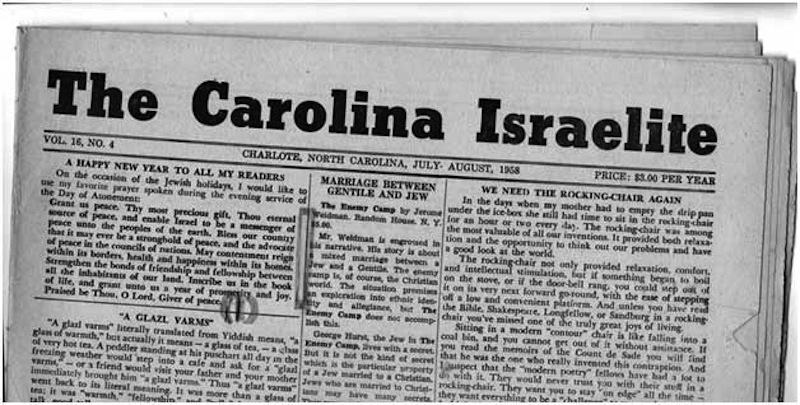