Adam Schiff was one of the star attractions at Donald Trump’s first impeachment trial. In his role as one of the House impeachment managers, Schiff pressed his case on the Senate floor by summoning an earnest indignation. He would at times get hoarse and weary. He would jab the air and lower his voice. He was a showman playing the role of a statesman.

The bulk of Schiff’s new memoir, Midnight in Washington, focuses on the scandal that erupted when President Trump sought to pressure Ukraine into investigating Joe Biden’s son Hunter. The whole affair was a gift from heaven for the Democratic congressman who represents Burbank, California. Schiff claimed to be in possession of evidence proving that Trump’s 2016 campaign conspired with Russia. When special prosecutor Robert Mueller’s investigation yielded no evidence of such a conspiracy, Schiff looked ridiculous—the supposedly dogged prosecutor had suddenly become the boy who cried collusion.

Then the House Intelligence Committee, of which Schiff became chairman in 2019, received a whistleblower’s complaint that alleged a sordid scheme to strong-arm the new Ukrainian president into cooperating with Trump crony Rudy Giuliani’s “investigation” of Hunter Biden. Schiff’s career was revived. And this time, he had the goods.

We never learn the identity of the whistleblower Schiff once promised would testify. Nor does Schiff acknowledge that Hunter Biden did indeed entangle himself in seedy foreign dealings. But he does share details of the sheepish conversation he had with reporter Sam Stein, during which he had to walk back his earlier comment that the whistleblower had not had contact with the House Intelligence Committee he chairs.

“I had been thinking about securing the whistleblower’s testimony before the committee, not any prior contact with my staff,” he recalls telling Stein. “But I screwed up and wanted him to know it.” As Schiff hung up the phone, he felt sick to his stomach, he says.

This passage gives the reader the false impression that Schiff is reflective and honest about his mistakes. But it’s best to read this admission as calculated contrition. For most of his memoir, Schiff writes as though he actually did reveal a Trump-Russia collusion scandal—and he ignores the ample public evidence of its debunking.

Schiff makes no mention of Michael Horowitz, the FBI inspector general who uncovered abuses so grave in his agency’s surveillance of former Trump campaign aide Carter Page that the secret court which had granted the bureau’s four surveillance warrants withdrew three of them. Schiff and his committee’s Democrats waged an 18-month campaign to defend the surveillance of Page, claiming without evidence that it was his Republican counterpart, Devin Nunes, who had misrepresented the classified record.

Then there is the matter of the Trump-Russia conspiracy itself. Schiff now maintains that his committee and other investigations did find collusion, but that Mueller failed to find enough evidence to prosecute the Trump campaign (or any U.S. citizen, for that matter) for conspiring with the Kremlin’s election interference.

“The president’s campaign could, and did, try to collude with the Russians to get help in the election,” he says in explaining why he declined to apologize for his earlier accusations in an interview with ABC News’s George Stephanopoulos. “Whether Mueller believed he could satisfy a jury that all of the elements of the crime of conspiracy had been met was another matter, and that would be up to him.”

Schiff’s argument rests primarily on a meeting that took place in New York’s Trump Tower in 2016. Donald Trump Jr., Trump’s son-in-law Jared Kushner, and campaign manager Paul Manafort all met with a delegation led by a Russian lawyer named Natalia Veselnitskaya. Emails between Don Jr. and a British promoter revealed that Veselnitskaya had promised dirt on Hillary Clinton and that Don Jr. had been receptive to hearing her out.

Schiff describes Veselnitskaya as someone with “ties to senior Kremlin officials but no official role.” He says she made her approach as a way for Moscow to determine whether Trump’s campaign would be open to cooperation down the road. Schiff neglects to mention that Veselnitskaya had been lobbying the U.S. government for years to roll back human-rights sanctions on officials tied to the imprisonment and death of the Russian lawyer Sergei Magnitsky. The dirt she provided to the Trump campaign, as I wrote in Commentary’s January 2021 issue, was provided not by Russian spies but by American opposition researchers working for the firm Fusion GPS.1 In the end, the meeting had nothing to do with enlisting the Trump campaign in Russia’s hacking or social-media campaign; it was about gaining Trump’s support for lifting the Magnitsky sanctions.

Fusion GPS was the same firm that contracted the retired British spy Christopher Steele to develop the infamous dossier that alleged the Trump campaign had struck a foul bargain with Russia. Fusion did so on behalf of the Democrats. In 2017, Schiff ran wild with the Steele dossier. During the hearing when then–FBI director James Comey confirmed the existence of an FBI investigation into Trump’s campaign, Schiff asked Comey about several claims Steele had made. Schiff specifically zeroed in on Page and the now-discredited allegation that Page had been offered a hefty brokerage fee for selling off a 19-percent stake in the Russian energy concern Rosneft during a visit to Moscow in July 2016.

“Here are some of the matters, drawn from public sources alone, since that is all we can discuss in this setting, that concern us and should concern all Americans,” is how Schiff qualified his remarks at the time. In this way, Schiff gave the impression that he knew more than he could say in public because the evidence in question was classified. He continued to play this game for the next two years, claiming in media interviews that he had “more than circumstantial evidence” of collusion.

But in fact, Schiff didn’t know anything more. In 2020, the Trump administration declassified the transcripts of depositions given to the House Intelligence Committee. Every witness had been asked whether or not he or she had seen evidence of collusion between the Trump campaign and Russia. None of them—not James Clapper, not Sally Yates, not Susan Rice—said they did. Schiff never accounts for the gulf between what witnesses told his committee behind closed doors and what he claimed to know before the cameras.

This is a shame. A more honest author would have pondered how his prevarications on the matter of Russian collusion ended up damaging his case with Republicans when it came to Trump’s impeachment for pressuring Ukraine. A more honest author might have taken a few pages to apologize to Carter Page and others he falsely accused. Doing so would have given some credibility to the parts of his narrative about Trump’s very real threats to our republic. But Schiff is a resistance leader, not a truth-teller, and he knows the likely audience for his book will overlook a few fibs and elisions for the greater cause of defeating the orange menace.

What Schiff and his admirers do not understand is that in their resistance, they are simply mirror images of Trump’s supporters. In 2016, Michael Anton said the choice between Trump and Hillary Clinton constituted the “Flight 93 election”—meaning that true conservatives had no choice but to support a deeply flawed candidate because the republic was on the verge of extinction. That formulation gave Trump’s supporters permission to explain away his lies and cruelty because the alternative would be so much worse.

The difference between Anton’s nonsense and Schiff’s is that Schiff doesn’t acknowledge the bargain he has struck. He ends his book lamenting the perils of a political culture in which different parties cannot agree on basic facts: “In the absence of that shared understanding—if indeed each party is entitled to its own alternative facts—then what basis is left for judging the merits of any particular agenda or platform? If everything could be true, then nothing is true.” In the end, then, Schiff is describing a problem he helped create. 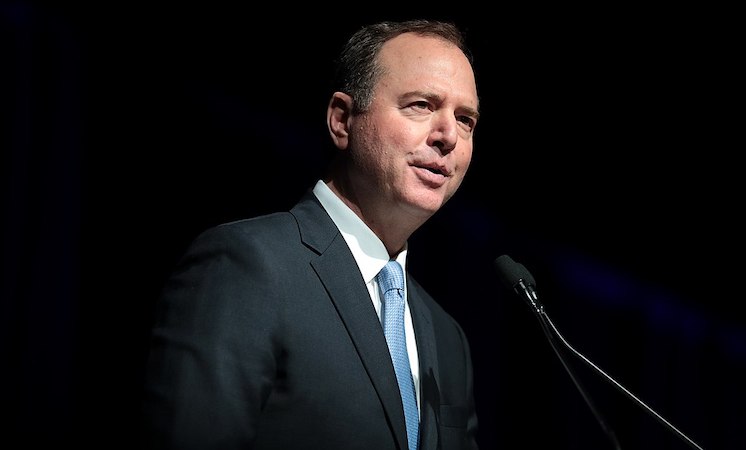 Eli Lake, a contributing editor to Commentary, is the host of the Reeducation podcast and a columnist for the New York Sun.