Ages ago, when our pandemic self-isolation was still novel, temporary, and hopeful, I dusted off my old fiddle untouched for more than 30 years—in the hopes of resurrecting my amateur musical career. My 12-year old is a serious pianist, and how great would it be, thought I, if the two of us could pass the time of the plague making music together? We would start with Rieding—the first concerto every six-year-old violinist learns—and from there move on to the Vivaldi A-minor, the Bach A-minor, then perhaps—this would be a real reach—Massenet’s “Meditation” from the opera Thaïs, which was as far as I ever got in my violin studies. The ultimate goal would be Beethoven’s Spring Sonata, a duet that would truly challenge both of us.

I shared my lofty ambitions with a friend who plays in the Philadelphia orchestra. I could hear his eyes rolling on the other end of the phone. “Just focus on the Bach,” he recommended, politely.

My fraught relationship with the violin dates back to my childhood in the Soviet Union. When I was six, my mother managed to get me an audition with our city’s most sought-after violin teacher, a slight, paunchy middle-aged gent with sad, soulful eyes, named Semyon Petrovich Shteyman. Shteyman’s teaching schedule was full, he informed her, and he made it clear, moreover, that he had a lot of experience with Jewish mothers—had one himself, in fact—every last one of whom is convinced that her child is the next David Oistrakh or, at the very least, Mischa Elman. But my mom was a fellow musician, and as a professional courtesy Shteyman agreed to grant me an audience. To prove that I had an ear for music, mom made me prepare a song that, to my great relief, I ended up not having to perform. Instead, Shteyman handed me a violin and a bow and told me to hold them like I was about to start playing. I don’t know what impressed him, but after looking me over for a minute and poking at my wrists, elbows, and fingers, he agreed to make room for me.

The Soviets approached classical music the same way they approached ballet or weightlifting, or hockey-playing circus bears: These were zones of national excellence on which the prestige of the Workers’ and Peasants’ Paradise depended. One did not casually take up fiddle lessons, the way one does in a middle-class American suburb; one was inducted into The Russian School—a 10-year multidisciplinary musical curriculum, to which one attended on top of regular school with the goal of gaining admission to the conservatory. For a six-year-old, I had a highly precocious sense of personal dignity, which was easily violated by Shteyman’s teaching style: no coddling, no cajoling, no excuses, no nonsense, with a sardonic Tevye the Dairyman sensibility thrown into the mix. I did not like it one bit. I smashed my first violin to pieces a few months in; it was immediately replaced by a quite good Czech Strad copy. But Shteyman was a brilliant teacher, and I made good progress with him for two years, until world events conspired against my promising musical career.

In 1978 my family emigrated. We arrived in Rome in early March and a week later moved into the working-class seaside suburb of Ostia, which lay a few miles from the ruins of Ancient Rome’s historic seaport of the same name. Modern Ostia was divided into a “Communist” neighborhood and a “Fascist” neighborhood. There were no other neighborhoods. We were in the Fascist neighborhood, which was the nicer of the two. Our flat was on the ground floor of a building that stood on a busy commercial street, with windows facing a small grocery store and butcher shop.

On the day we moved in, the former Christian Democrat prime minister, Aldo Moro, was kidnapped by the Red Brigades, a far-left revolutionary terrorist group. He was executed 55 days later, his body found in the trunk of a Renault parked a few blocks from the Tiber, near Rome’s ancient Jewish ghetto. The Moro kidnapping was what Joe Biden might call a BFD. Historical analogies are never precise, but to get some sense of it, imagine if Antifa, with the covert assistance of Cuba and Iran, waged a nationwide campaign of sabotage, bank robbery, mayhem, bombings, and assassinations, culminating in the kidnapping and execution of George W. Bush. This was Italy in the 1970s—the so-called Days of Lead. I vividly remember Rome in lockdown mode that spring, with carabinieri armed with submachine guns, and soldiers in armored personnel carriers and combat gear patrolling the streets. Americans would be wise to study this period of long-gone Italian history and steel themselves for what may be coming to a nice neighborhood near them.

The Italian working class in Ostia and elsewhere reacted to the kidnapping by declaring a general strike, and the busy little grocery store and butcher shop across the street pulled down their steel shutters, as did every other establishment in the country, leaving our street dark and abandoned. We had gone out that evening to visit friends, and walking back I noticed that our apartment windows were wide open, with light streaming out into the empty street, and curtains fluttering in the breeze. Persons unknown had taken advantage of the shutdown to break inside and steal practically everything we had, which wasn’t much to begin with. Our refugee status in Italy was precarious, and the break-in was never reported to the authorities, who would not have cared in any case. We never learned who did it, although I remember the word “Mafia” being thrown around. My Czech Strad was probably our single most valuable possession, and it was gone.

After we settled in the United States, I resumed my violin studies with a very sweet and mild young American lady and a new very low-end American-made instrument. My new teacher’s laissez-faire style of instruction was a far cry from Shteyman’s, and I much preferred it, but I never developed the self-discipline required for musical success in conditions of freedom. Although I finally gave up the violin in my teens, I learned to appreciate and, eventually, to love classical music, almost to the exclusion of other genres. So stuffy and retrograde is my musical taste that ’70s music to me has always meant Brahms and Tchaikovsky, rather than the Allman Brothers and the Bee Gees (who, to be fair, are also pretty good).

As part of our COVID-19 home-schooling routine this past spring, we watched all nine DVDs of Leonard Bernstein’s Young People’s Concerts with the kids—25 episodes in all. This series, featuring Bernstein and the New York Philharmonic performing first in Carnegie Hall, and later Lincoln Center, aired on CBS from 1958 to 1972. Each hour-long concert homes in on a particular musical theme, such as: What Does Music Mean? What Is American Music? What Is Sonata Form? Who Was Gustav Mahler? Bernstein exudes elegance and charisma as he explores each theme, never talking down to his young audience, and deftly deploying the Philharmonic to illustrate this point or dilate on that one.

The time-capsule quality of these programs struck each of us differently. The kids, being highly attuned to our current obsessions, chuckled at the complete lack of diversity in the orchestra. Indeed, until violinist Sanford Allen joined the Philharmonic in 1962, it consisted entirely of white men. (Allen quit the orchestra in 1977, explaining to the New York Times that he was tired of being treated as a token.) To me, it was extraordinary to consider that something this challenging and grown-up once captured the attention of primetime American television audiences, including children.

But there was another, even more depressing realization. The Young People’s Concerts spanned a period of American history that contained episodes as shocking and violent as our current chaos, if not more so, and for many of the same reasons. Were the 1967 and 1968 riots, which destroyed Newark, Detroit, and half of Washington, better or worse than what we see today in Portland and Seattle? Was the radicalism unleashed by those events half a century ago as deranged as today’s lunatic calls to decolonize Newtonian physics and tear down the foundations of American society? Hard to say. These things seem to be cyclical. But watching the Young People’s Concerts brought home starkly the fact that the damage done by these cyclical assaults on our culture is cumulative, each successive blow of the battering ram weakening the timbers of the gate, until some inevitable final coup de grâce brings the whole citadel crashing down for good.

Bernstein himself was famously ridiculed by Tom Wolfe in his 1970 essay Radical Chic: That Party at Lenny’s, for throwing a glamorous fundraiser for the Black Panthers at his Park Avenue apartment. Re-reading that essay today reinforces the impression that America is trapped in a tedious time warp, every other generation deploying the same slogans and bromides against a seemingly insoluble problem. But in 1970, the gatehouse of the citadel was still standing firm and reasonably intact, as the Young People’s Concerts attest.

The final episode in my DVD set, broadcast just weeks prior to Bernstein’s Black Panther party, is dedicated entirely to Beethoven’s one and only opera, Fidelio, which Bernstein describes as

one of his greatest works, containing some of the most glorious music ever conceived by a mortal, one of the most cherished and revered of all operas, a timeless monument to love, life, and liberty, a celebration of human rights, of freedom to speak out, to dissent. It’s a political manifesto against tyranny and oppression, a hymn to the beauty and sanctity of marriage, an exalted affirmation of faith in God as the ultimate human resource.

If Bernstein were still alive and had the poor judgment to speak such words today, he would be fired and spend the rest of his life groveling to be forgiven for his embrace of white supremacy. No monument to the universality of Enlightenment ideals—not the Declaration of Independence, not the Constitution, not the Jefferson Memorial, not the music of Beethoven—must be allowed to stand. Like that racist elk statute in Portland, it must be set on fire and toppled by the woke mob.

In July, the Times’ chief classical music critic, Anthony Tommasini, demanded that symphony orchestras end race-blind auditions—a relatively tame demand, considering that the classical repertoire itself is begging to be decolonized and canceled as a tool of racist oppression. But I have a feeling we’re just getting started.

As for me, I continue to make progress and have even invested in a decent student-quality violin. There is some consolation in making music with my son, even in a time of plague and despair. The Bach is coming along nicely, and there is hope still for the Spring Sonata. 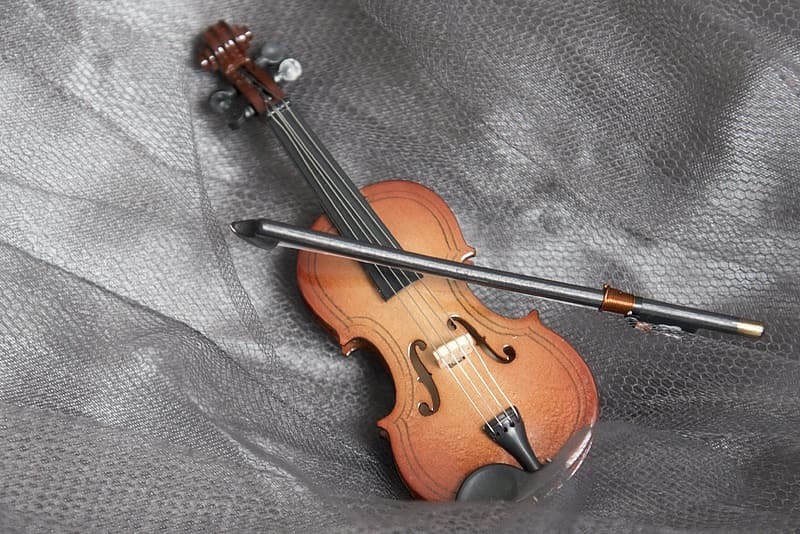 Ellis Mishulovich is an attorney in Washington, D.C. This is his first appearance in Commentary.