Like all successful statesmen, perhaps like all successful people, Margaret Thatcher was a study in contradictions. She was a woman, the first female prime minister in British history. She was never reluctant to exercise her feminine wiles, and even her sex appeal, in pursuing her aims with traditionally minded males around her, notably Ronald Reagan, who often behaved in her presence like a smitten teenager. But she had steel, even a harshness, that is not usually associated with the fairer sex. One of the more memorable observations by an admiring retainer was that she “had more balls than any of the men in her Cabinet.”

She was an ideologue, perhaps the most self-consciously ideological leader Britain has produced, schooled in Chicago economics, Milton Friedman, and Friedrich Hayek, and determined to put those ideas in practice to undo the prevailing postwar Keynesian orthodoxies. But she was a pragmatist, never—until perhaps her very final days in office—too committed to a political ideal to make compromises with political realities.

Charles Moore’s third and final volume in his authorized and authoritative biography captures all these contradictions and more, weaving expert and detailed assessments of the character behind the icon into this comprehensive account of the life of one of the dominant figures of the late 20th century. But perhaps the largest contradiction that Moore (the former editor of the Spectator and the Daily Telegraph) uncovers offers a critical clue to the evolution of conservatism in the years since she fell from office, not just in Britain but in the West more generally.

“Was she a traditionalist or a radical?” he asks in an epilogue. He finds copious evidence on both sides of the ledger. On the one hand, she was a passionate monarchist, a firm believer in parliamentary tradition, a stout Sunday-church-going Anglican, a staunch adherent of the codes and mores of traditional society: “To her, the habits of  ancient institutions were not mere outward show. She believed they represented something deep and proud in the history of her country.”

But she was a radical, too, not just in terms of a willingness to challenge and ultimately overturn the political order of 1970s Britain in a way that most conservatives of her generation, believing in the virtues of gradualism and established precedent, could not even imagine. There was hardly a convention in politics and policy, or even an institution in the entrenched British economic hierarchy, that she didn’t rail against.

She stood in opposition not just to the power of the trade unions and a sclerotic economic order that had done so much damage to her beloved country but against what in many ways Britons consider the establishment: the civil service, the City of London, the legal profession.

“She had the radical’s permanent angry impatience for change,” Moore writes. “Far from letting sleeping dogs lie she had them all up and barking.”

This contradiction speaks volumes to the current turbulence in Anglo-Saxon conservatism.

It is playing out in the Trump and Brexit era in a tension between, on the one hand, unbridled market capitalism, a deregulated, business-first world, and the elevation of growth and profit as prime objectives and, on the other, the values and mores of traditional conservatism—nation, family, faith.

The Reagan-Thatcher axis achieved a balance between the two that served its time well. The conditions of the 1980s meant their singular successes were to revive their own nations’ economies and the spirit of their people by emphasizing free markets, a smaller state, less regulation, while at the same time upholding those things as the values of freedom in contradistinction to the evil empire of the Soviet Union.

But in the post–Cold War era, the tensions between these two strands of conservatism have been exposed to breaking point. In many ways, the rise of Trump and Brexit represent a reassertion of traditionalism, the embrace of ideals such as the centrality of the nation-state and its bonds over the pursuit of economic freedom at all costs.

As Moore documents in the central narrative of this book, in Margaret Thatcher this tension was most powerfully played out in her attitudes and policies toward Europe.

In her first two terms, from 1979 to 1987, the economics-focused, free-market-pursuing prime minister was a keen supporter of an integrated, deregulated European Union. Believing lean and deregulated British businesses would succeed in open competition, she was a passionate advocate of the single European market, which was underpinned by a unifying principle: free movement of labor, goods, services, and capital across national borders. But of course it was this very reform, the pursuit of international economic integration and efficiency, that created the supranational institution the EU became, committed to aggressively weakening national sovereignty in favor of European-wide authority.

This European Frankenstein that Thatcher helped birth wound up bringing about her own downfall as she later sought to resist further integration against the political ambitions of her senior Conservative colleagues. And it initiated three decades of internecine strife in the Tory Party that culminated in Brexit and the new Tory Party of Boris Johnson.

That same tension has played out, too, in the U.S., in the age of Trump, with a Republican Party that was until just a few years ago the eager midwife to global economic integration and that is now more or less protectionist and anti-immigration.

Moore devotes much attention to Thatcher’s final weeks in office in late 1990, which culminated in her defenestration by her own parliamentary colleagues, led by many of the handpicked Cabinet colleagues she had elevated. The Europe rift was exposed when she first, from 1988 onward, strenuously resisted attempts by her foreign secretary, Geoffrey Howe, and her chancellor of the exchequer, Nigel Lawson, to sign Britain up for membership in the exchange-rate mechanism of the European Monetary System, the precursor to the euro. Ambushed by their threat to quit, she finally conceded only to wreak revenge on them both. She demoted Howe, and Moore provides delicious detail about the emotional damage the foreign secretary felt about being reduced to the ranks, especially over losing the grace-and-favor country mansion that goes with the job. And she sidelined Lawson with her increasing reliance on economic adviser Alan Walters.

Ultimately, such personal slights will come back to haunt you. When Thatcher returned from a European summit in November 1990, proudly announcing her determination to block further European integration, Howe pounced, resigning and denouncing her in a memorable House of Commons resignation speech. The party’s committed Europeanists, still dominant back then, rose up to oust her and end her tenure as the longest-serving British prime minister in more than 150 years.

Moore has much fascinating new detail on the final days, including the less than honorable role played by John Major, the man who would succeed her. But there’s much detailed historical grist in this tour de force beyond the tortured Conservative politics of Europe in this volume that covers the period that includes of course the end of the Cold War. The final days of her relationship with President Reagan are captured well, as is her warm embrace of Mikhail Gorbachev, the Soviet leader.

But Moore documents how the transatlantic relations cooled somewhat when Reagan was succeeded by George H.W. Bush. The new president was determined not to emulate Reagan; he felt Thatcher had Reagan wrapped around her little finger, Moore says. “I just can’t continue the way President Reagan did with her,” said the new president. “I respect her. I like her. But I’m the president of the United States!”

And yet Bush was quick to understand and acknowledge the central role she had played in winning the Cold War. She had been, along with Reagan, the only Western leader willing to stand up to Soviet bullying and call out Moscow.

Moore is admiring but not uncritical of his subject. He discusses her foreign-policy failures. Her Euro-skepticism and some rather traditional views formed in her World War II childhood caused her to oppose German unification, as she saw a reunited Germany as a potential threat to peace. This too put her at odds with Bush, who saw more clearly the opportunities of the post–Cold War Europe and moved more adroitly to exploit them.

Thatcher, who died in 2012, is one of the most documented of politicians in the modern age—and yet just about every one of the 1,000 pages is brimming with new detail unearthed from her own archives or from the author’s own interviews and researches.

Herself Alone and Moore’s preceding two volumes (Not for Turning and Everything She Wants) offer not only an unrivalled account of a political giant, but a chronicle of the modern politics of conservatism with lessons that resonate for our own age. Charles Moore’s biographical trilogy is a masterpiece. 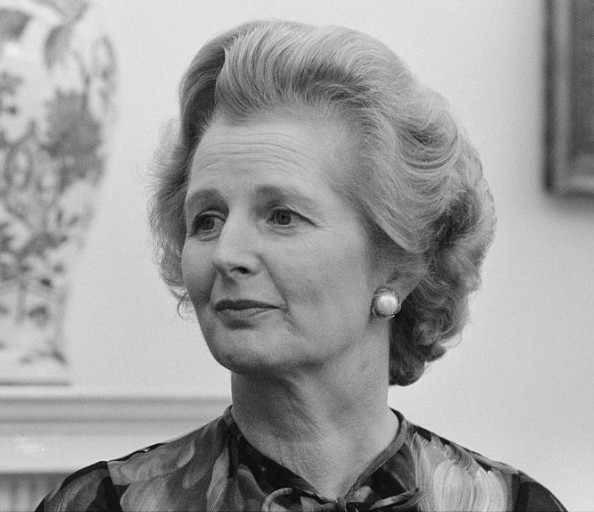 Gerard Baker is editor at large of the Wall Street Journal.