At a time when Communism continues to maintain a patina of coolness despite the tens of millions murdered by its adherents and the billions who have lived under its tyrannies, Patrick Chura has written a sympathetic biography of American Communism’s foremost literary hatchet man. Michael Gold: The People’s Writer is a volume in the SUNY series in Contemporary Jewish Literature and Culture. Chura, a professor of English at the University of Akron, offers a pro forma mea culpa by admitting that Gold might have been wrong in his idolization of Stalin before asserting that American Communists like Gold were “collectively, a peaceful, democratic, and consistently progressive force for good in United States social history.” Gold’s life and work supposedly offer lessons for today on how to defeat “racism, anti-Semitism, fascism, and xenophobia.” Such praise is not warranted, not for Gold and not for the CPUSA.

Itzhok (Irwin) Granich was born in 1893 on the Lower East Side of New York to two poverty-stricken immigrant Jews. At 12, after his father contracted a debilitating illness, he quit school to support his family, going on to take night classes, and dabbling in journalism. The angry, impassioned accounts of his childhood in his celebrated 1930 autobiographical novel Jews Without Money were not always faithful to the facts (for example, he never had a sister, whose horrible death is one of the of the most affecting stories in the book). According to the novel, Gold converted to radicalism in 1914 after hearing a speaker at Union Square calling for revolution.

The following year he persuaded a dean at Harvard to admit him as a special student. Desperate for money, he cajoled a Boston newspaper to hire him as a columnist who would explore what it was like to be an “interloper” at Cambridge. The column grew increasingly critical of Harvard’s isolation from the real world and ended abruptly just as he withdrew from school, citing illness.

He participated in several strikes, wrote for an anarchist paper, and attached himself to the Provincetown Players, the troupe whose most celebrated creator was Eugene O’Neill. Gold wrote several short plays and was a minor figure in the bohemian world of Greenwich Village. He was briefly engaged to Dorothy Day, the future founder of the Catholic Worker movement, with whom he interviewed Leon Trotsky for the socialist Call during his sojourn in New York. Fearing the draft, he fled to Mexico in 1918. When he returned to the United States a year later, he came back with the name Michael Gold—and as a full-blown Communist.

Gold’s activities during the 1920s centered on two radical magazines, the Liberator and the New Masses. There were fervent debates among their leading voices—Max Eastman, Joseph Freeman, Claude McKay, Floyd Dell, and Gold—about how faithfully they should follow the Communist Party line and what kind of literature they should promote. By the end of the decade, Gold had become a personage of some note among Communist writers.

The depression may have been a national tragedy, but it did wonders for Gold’s career. As editor of the New Masses, he played a key role in the founding of the John Reed Clubs in 1929 (named for the radical writer who had chronicled the Soviet revolution in Ten Days That Shook the World). Gold saw them as an incubator for the new literature that would transform American culture. An aspiring young worker would be encouraged to find employment in an industry for several years so he could write “as insider, not like a bourgeois intellectual observer.” He would then learn “to write publicity for strikes,” enabling the New Masses to replace “those vague, rootless people known as writers” with a staff of industrial correspondents speaking “in the tongue of the working class.”

Jews Without Money was published in February 1930, establishing Gold as the representative voice for proletarian literature, the type of writing that he had been pushing for the prior decade. It sold well enough to enable Gold to buy a summer cottage in New Jersey.

Invited to the International Union of Revolutionary Writers meeting in Kharkov, Russia, in the fall of 1930, Gold aligned himself with those anxious to entice friendly, well-known writers “into the ranks of the revolution”—to the dismay of the largely unknown young leftists who had followed his direction in joining the John Reed Clubs and in apparent contradiction to his scorn for bourgeois intellectuals.

For the next several years, Gold’s brash effort to both reorient American culture and attract bourgeois intellectuals to Communism gained traction. In 1932, the League of Professional Groups for Foster and Ford endorsed the CPUSA’s presidential ticket; its 53 luminaries included Granville Hicks, Edmund Wilson, John Dos Passos, Malcolm Cowley, Sherwood Anderson, and Theodore Dreiser. Gold was one of only half a dozen avowed Communists on the list.

In 1933, Gold signed a contract to write a daily column, Change the World, for the Daily Worker, the official party newspaper. It provided a bully platform to push his views and boost the careers of Woody Guthrie and Pete Seeger—musical examples of the revolutionary workers’ culture he longed for.

Although he never held an official position in the CPUSA, and was even excused from regular participation in local meetings, Gold became its “acknowledged literary gatekeeper.” But he proved unable to produce a second novel. Chura offers a variety of excuses, complaining that his column “drained his intellectual reserves.” A more plausible explanation is that Gold’s high hopes about proletarian culture were being dashed, as Communist hypocrisy, murderous purges, and the refusal of the intellectuals he was courting to subordinate their work to ideological discipline led to more and more defections.

In the last half of the decade, many of those who had jumped on the Communist bandwagon in 1932 jumped off. Some became Trotskyists and launched Partisan Review to challenge the simplistic and politicized aesthetics of Gold and his allies. For his part, Gold had praised each of the novels in Dos Passos’s USA trilogy when they appeared, but after Dos Passos broke with Communism, Gold denounced the complete work for being permeated by “merde.” But the greatest number were disillusioned by the 1939 Nazi-Soviet Pact, unable to stomach an alliance between Communism and fascism. Gold was not terribly bothered.

Initially, Chura hints, Gold was blindsided by the pact (which Chura calls “politically complicated”). He stopped writing his column for a month, but then launched a series of bitter attacks on those who had defected as renegades. Those attacks were brought together in a volume called The Hollow Men, published in 1941. Curiously, Chura never mentions that Gold ignored the cause of their apostasy, the Nazi-Soviet Pact, in the book. Instead, he endorses Gold’s view that his targets—Hemingway, Anderson, Hicks, Waldo Frank, and Lewis Mumford—were “effete bourgeois intellectuals” who lacked genuine empathy for the people. Their apostasy only demonstrated that in their previous work they were “slumming.”

CHURA ELIDES Gold’s support for the Communist alliance with fascism. This is of a piece with his biography as a whole, which features some bizarre notes of praise for his subject. Chura approvingly notes a column about Gold’s infant son in April 1940, comparing his crying for food with the Navy’s budget request that would snatch money from the unemployed, ensuring that “a lot of unpatriotic babies will keep crying for food.” He twice remarks that the CPUSA was “staunchly antiwar” until Hitler’s invasion of the USSR and the attack on Pearl Harbor “drove immediate changes in its position and rhetoric.” But in point of fact, Pearl Harbor had nothing to do with altering Gold’s or the CPUSA’s views. It was only after the Nazis attacked the USSR that all good Communists immediately abandoned their alliances with fascism and became ardent interventionists and supporters of an American arms buildup.

The farthest Chura will go is to admit that Gold’s penchant for “personality slander” and his “lockstep conformity to dictates adopted in Moscow” tarnished his image. After World War II, he was back at it, denouncing the Eugene O’Neill plays he had once praised (he also excoriated The Iceman Cometh, which he admitted he hadn’t seen or read, because it came from someone who wasn’t a real worker). He fiercely denounced Albert Maltz for daring to suggest that writers and artists should be judged by their works, not by their political positions. Even Chura is compelled to admit that this diatribe “sound[ed] both crass and philistine.”

Gold moved to France with his family in 1947 to work on his second novel. Returning empty-handed after three years, he was dumped by the Daily Worker and had to scrounge for money, even working as a clerical assistant at a Communist summer camp. He wrote banal poems denouncing the war in Korea, the execution of the Rosenbergs and American consumer culture, lauded by Chura:

Not even Nikita Khrushchev’s 1956 revelations about Josef Stalin’s crimes could shake Gold’s faith in the Soviet Union. He told a lecture audience that “we should have known” about the murderous attack on Jewish culture and intellectuals taking place in the Soviet Union, but “our leaders” had not asked or kept in close touch. He urged his listeners not to be disillusioned, because the Soviet Communist Party bore no responsibility for what had happened. Besides, Jewish culture was on the rebound in the USSR.

Gold died in 1967, still an unrepentant Communist. That such a wasted life can be seen as a wonderful heritage today bespeaks a failure of common sense and moral integrity on the part of Patrick Chura and all who might be inclined to think well of this shameful book. 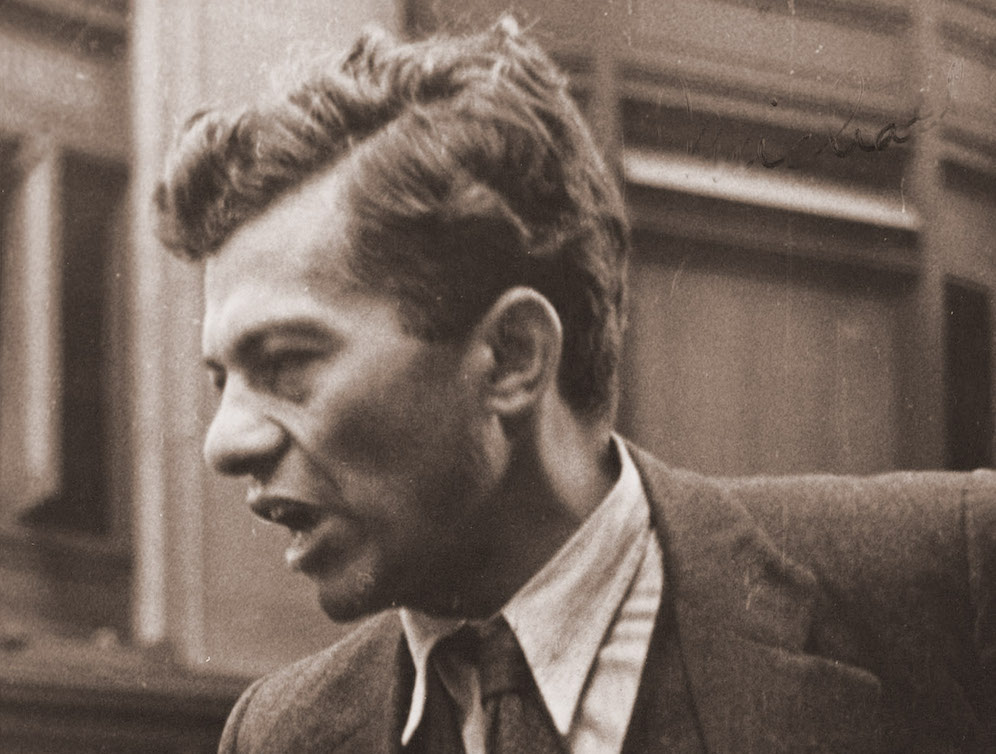 Harvey Klehr is the author, most recently, of The Millionaire Was a Soviet Mole: The Twisted Life of David Karr.