With his latest novel, Landfall, set during the second term of the George W. Bush administration, Thomas Mallon completes an unintentional trilogy in a literary subgenre he has made all his own: historical political fiction. Using Washington, D.C., as a canvas, Mallon ingeniously weaves his plots around actual events with a cast of characters comprising both the fictional and the real. In Watergate (2012), a brooding Richard Nixon seeks the counsel of Alice Roosevelt Longworth. Finale (2015), set in the lead-up to the Reagan–Gorbachev Reykjavik summit, features Christopher Hitchens, Nancy Reagan, Pamela Harriman, and its main character, a fictitious aide on the National Security Council caught up amid the burgeoning Iran-Contra scandal. Both books were highly readable, especially for junkies of American political history.

In Landfall, Mallon’s chief protagonist is Ross Weatherall, a conservative Texas academic appointed to a job compiling city heritage guides for a fictionalized amalgamation of the National Endowment for the Arts and the National Endowment for the Humanities. (Mallon himself served as deputy chairman of the latter in the George W. Bush administration). Unhappily married with children, Weatherall is dispatched to New Orleans, where he rendezvouses with a young protégée of Donald Rumsfeld’s, a staffer on the National Security Council named Allison Williams, the sort of hard-charging, career-driven female defense policymaker-cum-operative who has become ubiquitous in Washington over the past two decades. Over the course of the novel, their lives intertwine with that of Bush and are forever upended by the two unexpected cataclysms of his presidency: Katrina and the Iraq War.

Mallon is a talented storyteller, and with the benefit of hindsight that is the unique feature of the historical-political novel, interlaces fictional and real plotlines in a believable and engaging way. But the real pleasure in reading his novels is his treatment of actual personages. Mallon has such great material to work with—Dick Cheney, Condoleezza Rice, Donald Rumsfeld, Barbara Bush, Ann Richards, Bob Dole (the latter two serving here as dueling talking heads on Larry King Live, where their on-and-off screen banter serves the role of Greek chorus)—that his novelized versions of real people invariably overshadow the fictitious characters.

For instance, it is hard to come up with a pithier description of the hapless Jeb Bush than the one Mallon devises from the perspective of his mother Barbara: “the son she admired more and loved less.” Or this précis of the Cheney-Rumsfeld relationship, encapsulated in the vice president’s “facial expression showing the way he and his long-ago patron managed to remain in strange, eternal agreement, even when they were actually at odds.” Condi, meanwhile, longed for “41’s calm, Pax-Americana world, where she had been a happy ingenue instead of a failing star.” Rumsfeld, who, in the early months of the Afghan War displayed the demeanor of “a rejuvenated bantam rooster whose sparring sex appeal almost left Maureen Dowd susceptible,” is, by the end of the novel, a tiresome figure whose stubborn presence must be overcome to implement the Iraq troop surge Mallon foreshadows.

A longtime denizen of the nation’s capital, Mallon peppers his narrative with wry Washingtoniana, observing how the “important people down front” attending the president’s State of the Union address “were now trapped, like first-class airline passengers unexpectedly ordered to exit through the rear door” after the speech concludes. The city’s grandees “cordially loathe” one another. Driving to the Naval Observatory for his regular lunch with Cheney, Henry Kissinger observes the lone protestor outside the Vatican embassy who has stood there seemingly forever in protest of clerical sex abuse. Fred Kagan and Paul Wolfowitz make cameos.

Some novelists are renowned for their prose style, others for their gripping plots. Mallon is a master of dialogue, spinning lines for his characters that sound exactly like what you would expect them to say, only more so. “I didn’t know unelected presidents got presidential libraries,” Nancy Reagan remarks of her late husband’s erstwhile rival, Gerald Ford. “Look around her neck and you’ll find all the pearls of wisdom that didn’t go to her son,” Ann Richards quips of Barbara Bush. Presented with a predictably asinine argument about the Iraq War, Christopher Hitchens responds, “I’d ignore your point if you had one.” Mallon is also adept at envisioning the inner thoughts of his characters. Describing an imagined Oval Office meeting between Hitchens and George W. Bush, the latter thinks to himself, “Here comes the Mother Teresa shit.”

There are several more such laugh-out-loud moments in Landfall, but also ones of keen insight. Most observers of Bush trace his humor to a frat-boy immaturity; Mallon suggests its origins lie in family tragedy. “As always,” Mallon writes of the 43rd president, “he was pleased when he got a laugh—a matter of the deepest satisfaction to him ever since he’d taken it upon himself, at the age of seven, to cheer up Mother, despairing over the death of his little sister in the hotbox of a house in Midland.” Mallon has sympathy for his characters, a quality that enables him to avoid the easy caricature offered by smug political satirists. The one exception to this rule is John Edwards, contempt for whom oozes from every page on which he appears. Upon viewing aerial photographs of Edwards’s massive new manse in North Carolina, Ann Richards observes that it “looked like a combination of Tara and Jonestown.”

Mallon’s ultimate verdict on Bush is that he was essentially a decent man rocked by events and in over his head. In the president’s feelings of personal responsibility to help save Ross and Allison’s ill-fated romance, Mallon suggests an admirable, if quixotic, quality that characterized elements of his presidency. “If he could help to solve their problems, writ small in the ink of a double catastrophe, maybe that could lead him toward a solution for the catastrophes themselves,” Mallon writes of the president’s intervention in a domestic dispute while the ravages of Katrina and the Sunni uprising abound. The once-fashionable portrayal of Bush as an evil mastermind—which has not aged well with time—is here implied to be a stupid calumny, not only because Bush is a fundamentally good man, but because he lacked the capacity for anything so ornate. As a fictionalized commentary on the Bush administration, Landfall provides a fitting contrast to VICE, Adam McKay’s cartoon-villain portrayal, which seems to have been made for the sort of person who faults Michael Moore for subtlety.

Mallon has completed this trilogy at an auspicious time. It is the sort of fiction that our current president has rendered obsolete, for the simple reason that we’re now living it. In his novels, Mallon had to intuit the interior lives of his characters and their imagined dialogue behind closed doors. A diligent researcher, he thanks members of Bush’s National Security Council in his acknowledgments and cites tomes penned by New York Times and Washington Post reporters. In the nearly four years since a certain reality-television-show mogul descended a shopping-mall escalator to announce his campaign for the presidency, the American public has been inundated with a constant stream of tweets, leaks, and jaw-dropping revelations about this singularly chaotic administration. Literally nothing is left to the imagination, the most vital gift a novelist possesses. 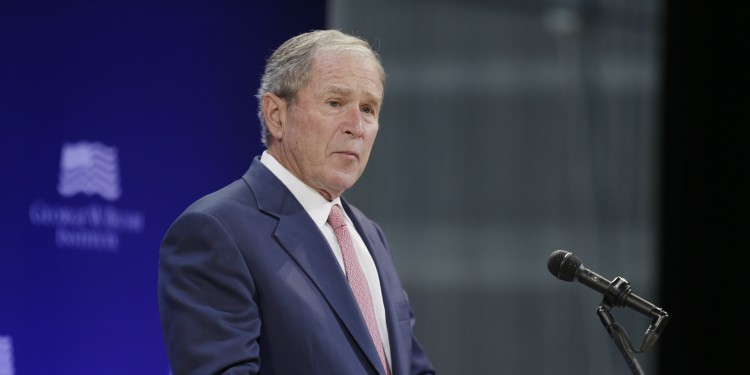