eff Flake is a highly credentialed apostate. An acolyte of Barry Goldwater’s limited-government, 10th-Amendment conservatism, he’s spent a quarter-decade in the conservative movement. From 1992 to 1999, he was the executive director of the Goldwater Institute in his native Arizona. He then departed the lofty realm of think tanks and headed to Congress, where he served as a representative in the House from 2001 to 2013 and a senator from 2013 to the present. Flake was a Tea Party conservative before there was a Tea Party. And when the Tea Party arrived, he watched in despair as it made something ugly out of his cherished principles. 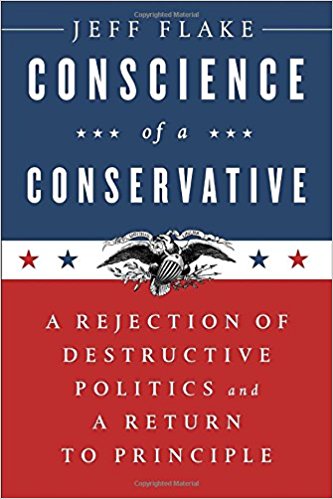 Conscience of a Conservative

“I regret having to write this book,” Flake states at the outset. He regrets it foremost because it’s necessary. The conservative movement, in his eyes, is lost. Over the course of his career, Flake has seen conservatives trade ideas for the cheap political currency of knee-jerk partisanship. In Conscience of a Conservative, the blame is spread far and wide on the right. George W. Bush is criticized for implementing policies that were “anathema to think-tank Republicans”; Newt Gingrich is judged the “modern progenitor” of destructive partisan politics. But Flake’s condemnation is less about any individual than about the collective destruction of a movement.

That movement once centered on matters of good governance, not popular outrage. Flake dismisses the Republican obsession with social issues and controversies, such as flag-burning, as a colorful distraction from the GOP’s free-spending habits. In the decades after World War II, conservatives sought to “curb the excesses of liberalism.” But while Flake remains vigilant in the struggle against big spending and big government, he sees little support for the cause among today’s conservatives. Refreshingly, he doesn’t dwell on the errors of liberals. As he notes repeatedly, those are for them to fix. His mission is to get his own house in order. The “whataboutism” that has overtaken conservative rhetoric is absent entirely from Flake’s book.

This is because the brazen tribal loyalty that has worked its way through the right in recent years is repugnant to Flake. The Republican Party, he writes, has been “swept up into a populist fever and has fallen for ideas that are the opposite” of what the party used to stand for. His main targets are the trade protectionism and immigration nativism that now drive the Republican agenda. These divisive ideas both erode the conservative conscience and threaten the GOP’s ability to grow as a party. Demographic trends show a steady shrinking of white America relative to minority populations. This means that Republicans need to do more to attract nonwhite voters. “Instead,” writes Flake, “we demonize them, marginalize them, blame them for our country’s problems.” In other words, Republicans went from being about individual liberty and freedom to fear and loathing. In this transition, Flake sees “the spasms of a dying party.”

Given that Flake finds such a dispiriting state of affairs, it is perhaps appropriate that the book has a consistently funereal tone. At times the author sounds like a prophet, rehearsing misdeeds and warning of impending doom:

We decided that it was better to build and maintain a majority by using the levers of power rather than the art of persuasion and the battle of ideas . . .

As the country burns.

And our institutions are undermined.

And our values are compromised.

And the people become increasingly despondent and enraged.

And we become so estranged from our principles that we no longer recognize what principle is.

Flake includes himself among the guilty “we.” His most noteworthy mea culpa is on having voted against the Troubled Asset Relief Program (TARP) bill in 2008. He knew it was necessary for the federal government to purchase problematic assets in order to strengthen the country’s financial sector in the wake of the financial crisis, but he wanted his share of populist adulation for having stood against a big spending bill. This is an extraordinary confession. TARP is not particularly popular today, and politicians simply do not publicly regret voting against unpopular bills. An admission of this sort speaks well of Flake’s seriousness of purpose.

Nowhere is Flake more serious than in his opposition to Donald Trump. After Trump’s election, many of his conservative critics went silent (some did so before he was elected). Fiscal conservatives found it easy enough to embrace economic nationalism, while conservative intellectuals began focusing on conservative policy gains. Jeff Flake stands alone in continuing to make the comprehensive case that Donald Trump is the leader of a political movement that is simply not conservative. For Flake, conservatism fundamentally embraces stability. Trump’s reckless policies, spiteful attacks on detractors, and impulsive conduct on social media are “profoundly unconservative.”

Flake takes aim at the post-reality universe in which Trumpism thrives—the accusations of “fake news” and the simultaneous wielding of “alternative facts.” He writes about being booed when he spoke out against Obama birtherism at a Red Mountain Tea Party event while he was running for Senate. Flake bluntly calls former National Security Adviser Michael Flynn a conspiracy theorist (though he doesn’t say what conspiracy Flynn endorses). “When a conspiracy theory becomes litmus-test orthodoxy,” he writes, “objective reality is at risk.”

To combat the Trumpian demonization of free trade, Flake has devoted an entire chapter of his book to the benefits of open-trade relations. This is the only chapter that focuses entirely on a single policy area. For Flake, trade is more than a means of our attaining cheap goods or enjoying profits from exports. It’s a core principle of his worldview. Trade connects dissimilar nations and spurs capitalism in unexpected places. For these reasons, he even favors removing trade sanctions on Cuba. His maxim is “When goods don’t cross borders, guns do.”

No case against the Trumpian right would be complete without a discussion of American borders. Here Flake adds a sappy personal touch. He fondly recalls growing up on an Arizona ranch and hiring illegal migrant workers. He notes with sadness: “Our mechanic Manuel was taken back to Mexico by the Border Patrol nineteen times.” Still, movement across the border was far easier in those days and Flake finds that to be representative of a healthier pattern of migration. This longing for the free flow of migrants makes Flake as open-borders as any Republican has ever been.

Muslim immigration comes in for a similarly sentimental treatment. Flake recounts how his father-in-law’s life was saved by immigrant Muslim doctors who would have been kept out by the new dispensation.

Flake’s book is a withering indictment of today’s right in general and Donald Trump’s presidency in particular. It is, of course, heartening to read a politician who’s willing to publicly flog his own side and even himself. But as for offering a way forward, Flake falls short.  How exactly are we to return to his Goldwater-esque vision of conservatism if the Republican base seems to want populism? And let’s talk about that vision. Are we to consider only an open-borders immigration policy? Is there no middle way that incorporates border control with legal immigration? When do we extol bipartisanship and national need, and when should we stand on principle against government action? If Flake is so animated by free trade, would it not be worth it to consider compromising on domestic policy to attain his desideratum? Flake offers no answers to these crucial questions because political tradeoffs require a flexibility that seems beyond him.

As things stand, Flake’s political future is in doubt. A Public Policy Polling survey conducted over the summer showed that only 18 percent of Arizonans approve of his performance, with 62 percent disapproving. He would lose to a generic Democrat by a wide margin and get the support of barely half of Trump’s voters and vanishingly few of Hillary Clinton’s. These aren’t numbers from which one easily recovers. Republican voters are angry at him for turning on their president, and Democratic voters see nothing to gain from supporting him.

Is there still a place for a conservative who wants limited government and means it—who opposes nationalism at his core? I don’t know and neither does Jeff Flake. But if he were more nimble in his thinking, he could make a stronger case for his ideas. Of what use, after all, is conscience if you can’t achieve anything? 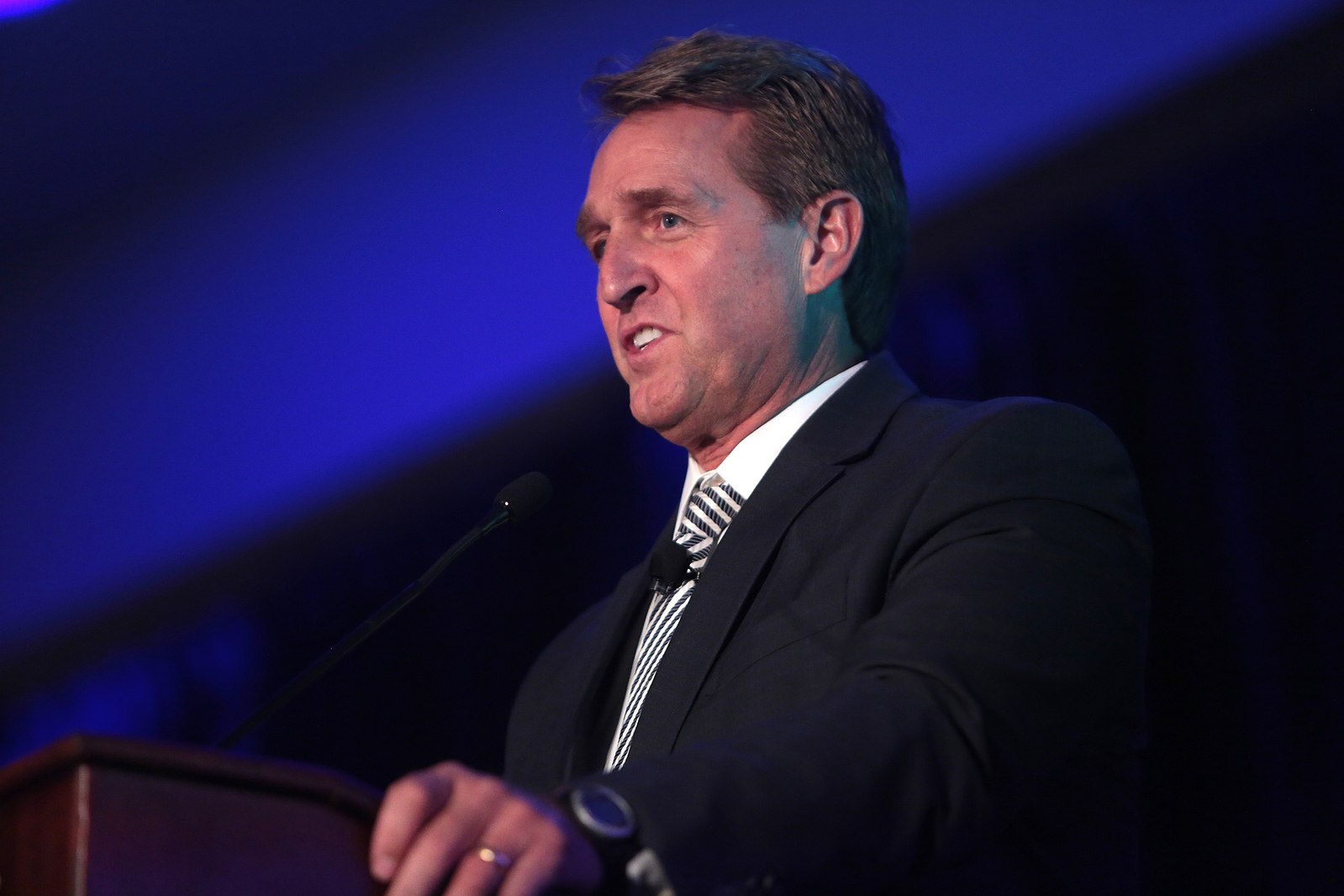 Jay Cobb is a writer based in Brooklyn.

A Man in Full

The Smashing of the GOP