All intellectual enterprises are acts of faith in a very profound sense—whether you’re talking about the crafting of an article, the publication of a book, or the pursuit of a nonvocational education. Such efforts are based on the proposition that reason and argument have the power to change the world, despite all the evidence to the contrary.

And so consider this sentence: “COMMENTARY is an act of faith in our possibilities in America.”

It was written by our magazine’s founding editor, Elliot E. Cohen, and appeared in the mission statement of COMMENTARY’s inaugural issue 75 years ago this month, in November 1945. The same sentence could be written about COMMENTARY today, in November 2020. It is remarkable, in fact, how closely Cohen’s originating philosophy echoes on every page of this issue, in every pixel on our website, in every minute of our daily podcast.

What Cohen meant by “our” when referring to“our possibilities in America” was the world of American Jewry, from which COMMENTARY arose and whose full integration into the national culture was this magazine’s truest and deepest purpose. Cohen, a visionary who tragically died by his own hand in 1959, could not have foreseen both the wonders and challenges that would greet American Jews over the following 75 years. Our integration into America was so thoroughgoing, so complete, so glorious that we find ourselves in 2020 among the most prosperous people in the land.

And over that time, the norm for Jews since Abraham’s covenant—the separation of this tiny minority from the rest of humanity—ceased being the case in America. The astonishing success of Cohen’s assimilationist project now threatens the long-term viability of American Jewry, as so many in the American melting pot have, over time, simply dissolved into America entire. “Surely we who have survived catastrophe, can survive freedom too,” Cohen wrote. It’s not so sure, alas. Helping American Jewry to “survive freedom” has become a key element of COMMENTARY’s mission and will be central to it over the next 75 years.

It is even more extraordinary to take account of how rapidly all this happened here, given the horror that came known in the same year as COMMENTARY’s founding. It was only in the spring and summer of 1945 that the enormity of what had been done to the Jews of Germany and Eastern Europe had been revealed. What would come next would be the creation of the State of Israel and the ingathering of millions of Jews from Europe and Arab lands—and the obligation of their fellow co-religionists to contribute in any way to this astounding project of cultural and religious reclamation. Now, some 7 million Jews make their home in the 29th-richest country on earth—a country that did not exist in 1945 and where only 600,000 Jews were living at the time. It has been COMMENTARY’s honor over these decades both to chronicle this miracle and to defend it against its intellectual and spiritual enemies.

It has also been our honor, and our obligation, to chronicle the miracle of America and to defend this glorious and noble experiment against its intellectual and spiritual enemies at home and abroad. That mission is as vital today as it has ever been.

There could be no better description of COMMENTARY today. “In the midst of this turbulence and these whirlwinds,” Cohen wrote in announcing COMMENTARY’s creation in the wake of a world war and a genocide, “we light our candle.”

Seventy-five years on, we keep that candle burning. 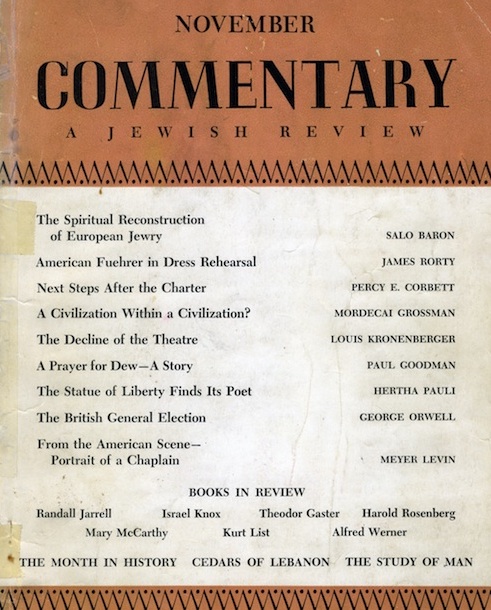