A great controversy erupted in 1977 over a notional atomic-age device. “The nuclear weaponeers have unfolded a new brainchild, the neutron bomb, which will kill people while preserving buildings, tanks and artillery,” wrote former deputy CIA director Herbert Scoville Jr. in the New York Times. “Neutron bombs have been proclaimed the ‘supercapitalist weapon’—preserving property while killing and sickening people.” President Jimmy Carter tabled the idea. Then, 43 years later, a neutron bomb hit America’s largest and greatest city. Of course, there was no blast radius. There was no radiation. There was only a wholesale withdrawal from public life, voluntary and involuntary.

We’d seen depictions of it in horror and science fiction—Keanu Reeves standing on a depopulated East 57th Street in The Devil’s Advocate, Will Smith walking on a Park Avenue viaduct returned to nature just south of Grand Central Station in I Am Legend, Tom Cruise alone for blocks at the spot where Broadway and Seventh Avenue intersect in Times Square in Vanilla Sky. These bits of cinematic legerdemain were breathtaking because they were both real and surreal at the same time. But then, all of a sudden, we came to know what it would truly be like to be in a Manhattan where everything was the same—but where there were no people in evidence. We were living in it.

Among other things, that “supercapitalist weapon” has turned out to be the opposite of supercapitalist. More than 26,000 restaurants in New York City have been forced to close their doors, according to Steve Cuozzo in City Journal, “costing 370,000 workers their livelihoods, [and] the city tax revenue of $750 million.” Libertarians and those with libertarian spirit have raged at elected officials and their underlings for ruining our economy, but these public servants were being led by the masses, not leading them. Polls from March to May both in New York and across the country showed overwhelming support for measures designed to lock down the populace to spare the country from the ravages.

“I’ve seen the lights go out on Broadway,” reports Billy Joel in “New York 2017,” his strange and lovely post-apocalyptic anthem. Only the lights haven’t gone down at all. Broadway is lit up. At night, Times Square looks exactly the same as long as your eyes are eight feet off the ground. Every inch of neon is glowing. And on every block there are maybe three sets of eyes looking up at them.

“New York on Sunday,” runs Carroll Coates’s lyric to a wonderful and little-known 1963 number. “Big city taking a nap.” The song is called “Sunday in New York,” and it was written when blue laws still prevented much of ordinary commerce on the Gentile Sabbath. There was little to do in those days, and “Sunday in New York” makes it sound glorious: “You can spend time without spending a dime, watching people watch people pass.” On the day of rest, Mel Tormé’s silken voice tells us, “if you’ve got troubles, just take them out for a walk. They’ll burst like bubbles in the fun of a Sunday in New York.”

In the era of pandemic, every day is Sunday in New York, only more so. Indeed, all you can do is go outside for a walk. In the early part of the 20th century, blue laws forbade playing sports in parks lest they distract from religious observance, and so it was in Spring 2020—swings were removed from playgrounds, ball fields chained and locked. “Outdoor recreation,” declared New York Governor Andrew Cuomo at the outset of the crisis in one of the blunt pronouncements that made him a hero to people looking for an anti-Trump even as he sent elderly virus sufferers back to nursing homes to infect and kill thousands of others, “is a solitary recreational exercise.”

These are not normal times, Cuomo said as he redefined recreation. That was March. Two months later, New Yorkers had adapted more readily than anyone could have anticipated. What felt abnormal in March felt normal in May. Our troubles have not burst like bubbles. We inhered them. If there were a declaration that all was clear and everyone could resume old activities, it would feel abnormal to walk on crowded streets; to lie on the grass closer than six feet from a person with whom you do not live; to walk into a building and sit in a plush seat someone else just sat in to watch superheroes battling an interplanetary Malthusian who wants to kill off half of all living creatures with a snap of his finger; to eat a meal in a room where the back of your chair scrapes the back of someone else’s chair who is so close to you that the hairs on the backs of both of your necks seem to stand up as warning.

How was it so easy for the once-unthinkable to seem as though it has become inescapable? It was inevitable once we had spent a few days coming to terms with the city’s emptiness. Our leaders, having told us not to play together and having closed our gyms, give us no option but to confront the city’s living death if we want to escape from our shelters-in-place for a time. My friend Daniel Rose, a businessman and amateur photographer whose stunning images you are seeing here and on our cover, used the time to document this unnerving reality. And it turns out it is never not unnerving to be in these deserted urban Bryce Canyons, these areas marked by the absence of bustle and the whistling of the wind uninterrupted by a mass of human bodies, no matter how many walks you take through them. Another pop-culture reference, this one from Bill Murray trapped in his perpetual Groundhog Day, delivering the existential weather report from his endless purgatory: “It’s gonna be cold, it’s gonna be gray, and it’s gonna
last you for the rest of your life.”

We New Yorkers have long made reference to the city’s “emptying out” in August, by which we meant that you could get a table at a restaurant otherwise unavailable to you, or that you might be able to find a parking space without hunting for it for an hour. It didn’t mean there weren’t 150 people crammed into a subway car, because they were there in August as they were in December. It didn’t mean you didn’t have to spend 15 minutes waiting in line to exit the FDR Drive onto the Brooklyn Bridge, because you did. All it meant was that it was a little less crowded. We knew nothing.

The deepest of all truths is that a city with an empty cityscape cannot exist for long. A living New York City is the opposite of empty by definition. Consider Manhattan, the second-smallest county in the United States by landmass, an island on which 1.6 million people live—73,000 per square mile. But that’s literally not even the half of it. Its daytime population during the week is more than 4 million; on weekend days, that shrinks to 3 million. Six million people rode the 850 miles of New York City subway track daily; that number dropped to 600,000 in April. Maybe it will all come back. But what if only 90 percent of it comes back? That missing 10 percent—the people who will never go on a subway, never enter a restaurant, and live a relatively hermit-like existence or leave entirely if they are able to do so—is the margin between profit and economic calamity. Between life and death.

As a speechwriter for Ronald Reagan, I wrote an address that featured this florid phrase: “When the tall towers of our greatest cities have crumbled to dust in the turnings of time…” I was 27 years old at the time, and tempted by grand rhetorical flourishes of this kind, lifted from Shelley’s “Ozymandias.” Little did I know that towers don’t need to crumble for a city to give you a sense of what it would be like for it to turn into dust. 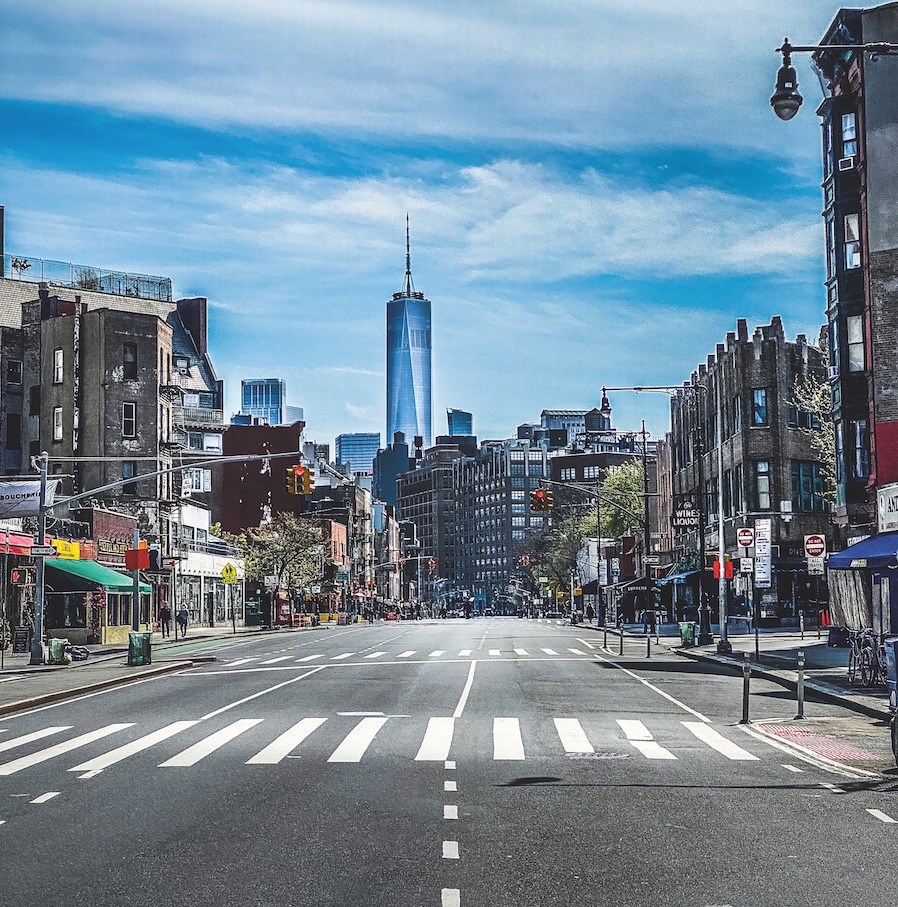 Daniel Rose lives and works in Manhattan. These are his first published photographs.