No place is a paradise on earth. Indeed, the very idea of paradise on earth is idolatrous. But you ought to be given a little leeway in your idolatry if you are Jewish, because the United States was and remains the first and only country on earth in which a Jew can feel that he or she can both be a fully participating member of the tribe and a fully vested citizen at the same time.

This did not happen all at once, but just as the founding philosophy of the country was in tension with the slavery that stained the United States until the Emancipation Proclamation did away with it, so was the same founding philosophy at odds with the anti-Semitic norms in Western culture. And by the year of my birth in 1961, most institutional barriers to Jewish advancement had been done away with. In the 58 years since, I have personally experienced only the slightest whispers of the ancient hatreds that have beset my people since Joseph died in Egypt. My Jewish contemporaries and those born after us are, in this respect, the most fortunate Jews ever to have walked this earth.

I am unwilling to surrender this deep and true sense of the blessings of the United States to the grotesqueries of a freshman member of Congress who wants the world to believe that the Jewish people are working behind the scenes to silence her and people with her views—using their $100 bills (“all about the Benjamins”) as lure and bait.

If what Ilhan Omar says she believes about the Jews were true, she would be sitting in a Twin Cities living room in deserved obscurity, left to rot there by the very conspiracy she claims is so powerful. If the Jews were indeed “hypnotizing the world,” as Omar claimed in 2012, then Israel wouldn’t be the subject of more hostile United Nations resolutions than every other nation on earth combined. And if moneyed American Jews were so powerful that they could successfully suppress views hostile to Israel, she wouldn’t ever have gotten to Washington in the first place.

The fact that Omar is in Congress at all is testimony to the monstrous falsity of her despicable slanders. But she did not get there alone. This was made evident by the shockingly aggressive posture within the Democratic Party against censuring Omar for spreading and defending hostile views about a minority group. For that is what Jews are, of course. We make up less than 2 percent of the population of the United States. We are, it would seem, the only minority group in America that it is permissible to criticize as a group—at least as far as the progressives who are coming to dominate the Democratic Party are concerned.

Jews who support Israel have had a pending appointment in Samarra with the Democratic Party for decades—ever since Jesse Jackson electrified the left wing of the party with a 1984 candidacy that featured him calling New York City “Hymietown” even as he accepted security assistance from Louis Farrakhan’s Nation of Islam. The Jackson moment may have seemed like an outlier, and it was, but it also slowly injected a new kind of anti-Semitic radicalism into the party bloodstream. That radicalism resurfaced in 2012 at the Democratic convention when a seemingly uncontroversial mention of Jerusalem as Israel’s capital was greeted with loud boos and required three votes to be included in the party’s platform.

Ilhan Omar’s views, and the startling and depressing obeisance they have been granted by the leaders of her party in the House and Senate, spring from these parasitic weeds that are attaching themselves to the Democratic Party root. They are a sign of the implicit progressive rejection of the very melting-pot ideals that have allowed American Jews to be both Americans and Jews. In slandering us, Omar and her ilk slander America. 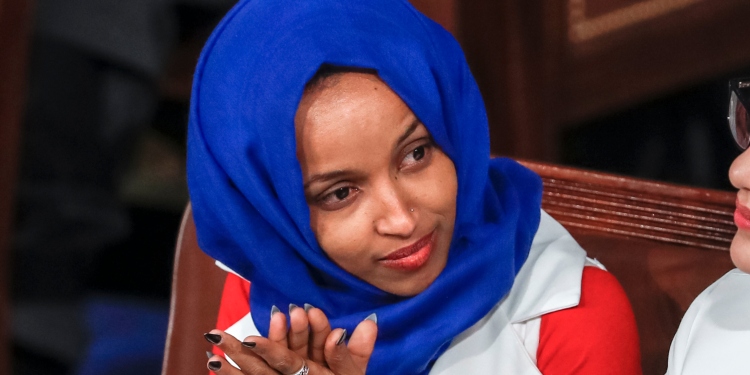