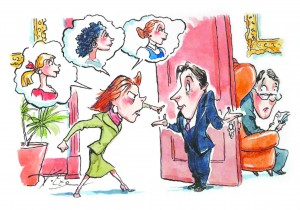 A broker has the flu. His wife takes his temperature.

Kaplan works for a hedge fund and is never home. His wife storms into his office and doesn’t see his co-worker Rubin sitting in a chair behind the door.

“You’re having an affair,” his wife says.

“I’m not having an affair, Charlotte,” Kaplan says.

“I know,” Kaplan says. “She gave me three good leads.”