The question before us now is whether and in what fashion the Republican Party will survive Donald Trump and the insurrectionist riot of January 6, 2021, for which he was impeached by the House of Representatives.

Unlike the first impeachment of Donald Trump, this second impeachment was appropriate and necessary. Congress had to do what it could to intervene to forestall the rise of a new era of political lawlessness and violence in the United States—in which political leaders treat the constitutionally mandated procedures that undergird our representative government as entirely conditional, only worthy of being followed if the results come out the way they like them.

The idea was a novel one, to be sure—sending a mob to intimidate Trump’s own toadyish vice president into magically refusing to accept the electoral count and forcing Mike Pence to announce, through a power he did not possess, that someone else had won the election. But it’s only novel once. The unthinkable is no longer unthinkable once it has been tried. That is why a door to nihilistic evil, once opened, must be locked, nailed shut, epoxyed as a seal, and bricked up—and then, after all that, the aperture must be hardened from assault like a nuclear silo.

That is the justification for the impeachment. It also speaks to the need for the Senate’s conviction based on the House’s indictment, no matter when or how long it takes. The events of January 6 were incepted, encouraged, galvanized, and implicitly directed by the country’s most powerful single person, out of his disappointment and rage at the imminent loss of his power.

The horror had to be anathematized. The political and social wound it opened had to be cauterized. And all present and future leaders had to be put on notice that any such action taken in the future will be met with the only kind of political force we do sanction—the force of impeachment and the potential removal from office.

So vital is this remedy, and so serious, that we can see just how foolish it was to use it with questionable intent both in Trump’s first impeachment and in the case of Bill Clinton in 1998. Had those self-defeating efforts been avoided, it would have been far more difficult for Republicans to vote no on this open-and-shut case, as most did in the House either out of an instinct of political self-preservation or as a result of their own partisan—or literal—madness.

I say literal madness because at least one newly elected Republican member of Congress, Marjorie Taylor Greene of Georgia, issued the following statement a week after the Electoral College tally of 306–232 had been certified and Joseph Robinette Biden had formally become the president-elect: “President Trump will remain in office. This Hail Mary attempt to remove him from the White House is an attack on every American who voted for him. Democrats must be held accountable for the political violence inspired by their rhetoric.” The only way President Trump could, at the time she issued the statement on January 12, remain in office would have been through a literal coup d’etat.

It’s possible that Greene, who endorses the many-tentacled conspiracy called QAnon, might be clinically insane. But if so, what of the 137 members of her party in the House who, the week before, joined her in contesting the electoral results in Pennsylvania? The argument made on their behalf is that they believe the election was stolen and their belief is their truth and their truth must be honored. Yeah, well, people believe in lots of things. And genuinely. Arthur Kopit, a notable American playwright, once said in no uncertain terms that he’d seen the Loch Ness Monster. I admire Kopit’s play Wings. That doesn’t mean I think he actually saw a sea creature in a Scottish lake.

There is such a thing as electoral fraud. I can think of elections that might well have been stolen. The Minnesota Senate race in 2008 saw the mysterious discoveries of missing ballots and the likely participation of ineligible voters turn a 215-vote lead for incumbent Republican Norm Coleman into a 312-vote victory for Democrat Al Franken, out of more than 2.8 million cast. But the margin of victory in Pennsylvania was 80,555 out of 6.8 million. You can see how an effectively tied contest election can be gently pushed in the wrong direction by fraud. But not a race won by 1.2 percent.

Any fair-minded dive into the supposed “vote-fraud” controversies of 2020—by which I mean ones that do not involve either the rantings of soon-to-be-disbarred lawyers or the factitious intellectual droolings of slavering MAGA apologists—gets you nowhere. The only grounds to claim the election was run irregularly have to do with changes to liberalize methods of voting due to the pandemic.

The fact that those seem to have favored Democrats has more than a little to do with the intervention of one Donald J. Trump, who loudly insisted and preached that voting early or voting by mail was some kind of evil act. In only one state—Florida—did he bow to the wishes of a friendly governor and cease his lobbying against voting ahead of time. He won Florida by two points, in part because Florida Republicans participated in early voting to a far greater degree than in other states—especially Pennsylvania. In this way, as in so many others, Trump’s behavior played a central role in his own defeat.

Then he instantly demanded other Republicans take up the cudgel on behalf of his stolen-election excuse, even though it was he who cost the party the White House and then, in January, the Senate with the losses in the two Georgia Senate runoff races. (A credible study found that 115,000 Republican voters stayed home rather than participate in the runoff due to Trump’s theft claims; the margin of victory in the more decisively won race in Georgia was 75,000.)

Trump’s demand here was one of the most chutzpahdik in political history, but he knew what he was doing. He was demonstrating how he had turned the GOP into a party of one—the party of Trump. Even in defeat, he remained and, in the wake of impeachment remains, the most powerful figure on the American right, and power in this instance isn’t just metaphorical. It’s literal. He summoned a vast crowd to Washington on January 6, promising them it would be “wild.” And then he said they should go to the Capitol and let Mike Pence know how they felt.

The crowd he summoned was real, representing the political threat to those who would oppose Trump in the House and Senate—in the form of grassroots activism that might lead to primary challenges and election losses in the future. The violent evildoers in the crowd, much smaller in number but still several hundred strong at the last, were real, too. But the threat they posed, and that those who likely admire them for their zeal pose, was and is more immediate.

Representative Peter Meijer told Reason magazine, “I had colleagues who, when it came time to recognize reality and vote to certify Arizona and Pennsylvania in the Electoral College, they knew in their heart of hearts that they should’ve voted to certify, but some had legitimate concerns about the safety of their families. They felt that that vote would put their families in danger.”

Courage is an exceptional quality; one cannot expect people to exhibit it, and being unable to do so does not mark those who fail to show it as bad or sinful. Kevin McCarthy, the top-ranking Republican in the House of Representatives, said during the impeachment debate that Joe Biden won the election. A week earlier, he had voted to object to the electors because he didn’t want to be outflanked on his Trumpian right by the number-two Republican, Steve Scalise. That is normal political behavior. It is understandable. As I say, we cannot expect people to be brave. But we can make note of who stepped up and who didn’t. The Republicans who voted for impeachment, led by Liz Cheney in Wyoming, showed bravery of a rare sort for the reasons I’ve just outlined. They have put their political careers at risk, and perhaps they have put their lives at risk as well.

It is painful for me to think that the circumstances of 2021 have compelled me to write these words about elected politicians in the United States, and what these words might portend for this country’s future. And it is painful for me to think as ill as I am thinking today about politicians whose ideological perspective is closer to my own than the politicians who cast what I believe to be the right and proper vote to impeach Donald Trump. But the truth is the truth, and we must look the truth in the face. The Republican Party is in an existential fight for its own survival as a positive force in American politics and American society.

At his rallies, Donald Trump loved to recite the lyrics to “The Snake,” in which a “tender-hearted” woman finds a half-frozen poisonous asp. She nurses it back to health. Then it bites her. Dying, she asks why he would do such a thing. “The Snake” concludes: “‘Oh shut up, silly woman,’ said the reptile with a grin. ‘You knew damn well I was a snake before you took me in.’”

Trump claimed “The Snake” was a metaphor for illegal immigration, with America as the kind but fatally naive woman and the snake as a stand-in for the illegal immigrants who were supposedly poisoning us. The analogy was labored, but that didn’t matter, because that’s not what the words really meant to Trump or his acolytes. The way Trump recited the lyrics, the snake was not the villain but its hero—and that is how the crowds reacted, roaring with delight at the snake’s grin and the honest and pitiless cynicism his words revealed. Trump loved reciting it, and his throng loved hearing it, because they both knew the truth: He, Donald Trump, was the snake.

Trump’s pitiless cynicism was and is the quality they and he most prize in him. He doesn’t stand on ceremony; he squats atop it like a man over a toilet. Asked in a 2015 debate how he could claim he was a true rival to Hillary Clinton when he had made sure she would attend his wedding in 2005, he replied, “She had no choice because I gave to a foundation. I gave to many people before this. When they call, I give. And you know what, when I need something from them two years later, three years later, I call them. They are there for me.” Bill O’Reilly asked Trump how he could say he respected Vladimir Putin, given that he is a killer, and Trump replied, “We have a lot of killers. Well, you think our country is so innocent?”

Not any longer I don’t. 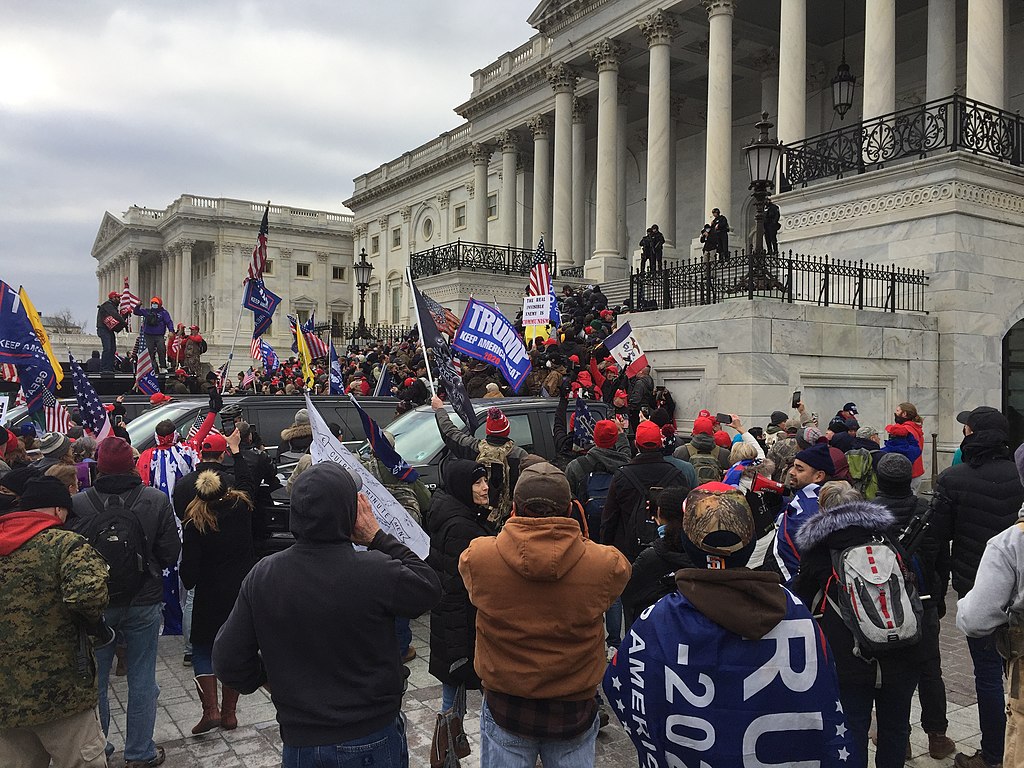