In the spring of 2017, Rasmea Odeh’s reputation on the left was in full flower. On April 2, she earned multiple standing ovations at the membership conference of the anti-Israel group Jewish Voice for Peace (JVP). At the time, Odeh was on trial for immigration fraud, having omitted from her 2004 application, among other things, a ten-year stint in an Israeli prison. Before she got sprung in a 1979 prisoner exchange, Odeh had been serving two life sentences and then some for her role in two 1969 bombings, one of which took the lives of Hebrew University students Edward Joffe and Leon Kanner. That bombing took place at a Jerusalem supermarket packed with shoppers preparing for Shabbat. Only the sharp eye of a rescuer and the defects of an operation meant to kill as many Jews as possible prevented a mass slaughter.

It may seem strange that JVP, which claims to stand for nonviolence and presumably had many non-murderers to choose from, selected Odeh as a keynoter. But JVP, the Women’s March, and other activist groups that embraced Odeh had a ready answer: Odeh got a bum rap. She was framed by the Israelis, who tortured a false confession out of her, and then was mistreated by the racist, Zionist American justice system. An onlooker, dependent on mainstream he-said-she-said coverage, might be forgiven for not knowing what to think. Steven Lubet, in The Trials of Rasmea Odeh, puts matters beyond a reasonable doubt.

A professor at Northwestern University’s Pritzker School of Law, an expert on trial advocacy, and a former defense attorney, Lubet offers a dispassionate assessment of the evidence, wherever it points, and an engaging blow-by-blow of the legal action that resulted in Odeh’s pleading guilty and eventually being deported. Here is what he establishes.

First, Odeh was guilty of the crime to which she pleaded guilty: “procuring citizenship contrary to law.” She falsely denied, in writing and in person, being arrested, convicted, and jailed in Israel. That lie, without which she would not have obtained citizenship, was illegal. After her grudging plea was accepted, Odeh rushed to the courthouse steps to take it back in the presence of her fans. But Lubet shows that Odeh pleaded out for a good reason, namely, the weakness of her defense.

At trial, Odeh claimed that she misread her naturalization application, which asked such unambiguous questions as “Have you EVER been convicted of any crime or offense.” That boldfaced, capitalized “ever,” she said, referred only to convictions in the United States, she had thought. The official who conducted her naturalization interview testified to having clarified, as a routine practice, that the word “ever” included “anywhere in the world.” Odeh asserted that the official never did so, which is why she reaffirmed, under oath and line by line, the lies in her application.

When she was reminded that she had lied in the same way in 1994 to obtain a visa, Odeh explained that her brother had filled out the application and that she had uncomprehendingly signed it. She testified that she knew only “some words and basic sentences” in English at the time. But Lubet’s research shows that Odeh likely graduated high school with “at least two thousand hours of English instruction,” that she later took English classes in Jordan, and that her post-secondary studies included English materials.

Odeh went with these weak defenses only after the court judged another weak defense inadmissible. An expert witness was willing to say on her behalf that Odeh, diagnosed with chronic PTSD, might “cognitively process questions about her past to avoid recalling traumatic experiences.” The three “nationally prominent experts on PTSD” Lubet consulted dismissed that speculation; there is no evidence to support it. In any case, Odeh has often discussed her experiences, leaving one to conjecture that her form of PTSD affects the sufferer’s memory only when forgetting might be a ticket to citizenship.

Second, Lubet shows, Odeh had a fair trial in the United States. Her defense team antagonized Judge Paul Borman, the first judge to supervise her case, by claiming that his contributions to Friends of the Israeli Defense Forces and the Detroit Jewish Federation required his recusal. In fact, the contributions had been made by the judge’s cousin, who shared his name. Judge Borman, nonetheless, diligently found another reason to recuse himself: an old investment in the supermarket Odeh helped bomb. Some of Odeh’s defenders, including her attorney, Michael Deutsch, had complained from the beginning that she couldn’t get a fair trial because of the machinations of the Israeli government and the “Israel lobby.” But, Lubet reports, “the Israeli government had been decidedly cool about cooperating in the prosecution” and “had done nothing to initiate the case.” And, as Lubet also observes, Judge Borman’s “scrupulous” investigation into “connections that the defense had not raised” vindicated “the
court and judicial system.” That didn’t stop Odeh’s “defense committee,” a group of activists organized in her support, from crowing that Judge Borman’s recusal proved the defense’s “claims of pro-Israel bias.”

Gershwin Drain was the next judge assigned to Odeh’s case. Judge Drain, “an African American native of Detroit,” “a lifelong Democrat,” and an Obama appointee, had been “a public defender for twelve years” before he became a judge. This did not stop Odeh and her supporters from invoking racism to explain their team’s losses in court. Never mind that a three-judge panel, including two Republican appointees, actually overturned an initial verdict against Odeh. And never mind that Judge Drain ordered a new trial that would have permitted Odeh to present her expert PTSD witness, as well as evidence that she had been tortured. Never mind that the plea deal she eventually took, after lying repeatedly to the court, was the same deal she had been offered before she went to trial. Her prosecutors, said one prominent supporter, “were doing the bidding of Israel,” which is why Odeh found it necessary to take a plea rather than telling her story and “putting Israel on trial” in court.

Third, Rasmea Odeh was guilty of the crimes she lied about, including her participation in the operation that killed Edward Joffe and Leon Kanner. Lubet counts the ways in which this should be obvious. Both of the women who worked with Odeh and planted the bombs have implicated her in the operation, not under duress but during interviews with friendly interlocutors. In one such interview, Odeh herself sits, smiling and denying nothing, as her accomplice thanks her for “dragging [her] into military work.” After Odeh went to prison, the Popular Front for the Liberation of Palestine (PFLP) named a hijacking unit after her and made her release a high priority. Odeh, who portrayed herself to “European and American audiences” as an innocent victim caught up in an Israeli dragnet, told a sympathetic interviewer that she was a member of PFLP’s central committee, and she gave several “Arabic-language television interviews recounting her involvement in ‘military work,’” a euphemism for the PFLP’s attacks on civilians. And why not? Before she came to the United States, Odeh was celebrated in the Arab world.

Lubet also looks carefully at Odeh’s story of torture at the hands of Israeli interrogators. He finds some important details of that story to be implausible but others to be credible. Which should come as no surprise, considering the 1987 Landau Report that was endorsed by Israel’s government. That report determined that Shin Bet interrogators “routinely lied in court about the treatment of detainees.” While the report endorsed the use of “moderate physical pressure” in the interrogation of terrorist suspects, it “tacitly admitted that even more brutal measures had been employed in the past and banned their use in the future.” Judging by consistent elements in Odeh’s multiple accounts of her experience, the “corroboration of verifiable details,” and “other circumstantial evidence,” Lubet concludes that Odeh “was fiercely brutalized by her interrogators, leading to a confession that would not be admissible in American courts.”

Nonetheless, he adds, she confessed to a crime she had committed.

It’s hard to say, Lubet reflects, who among Odeh’s cheerleaders knew or suspected that she was lying about her innocence. Her “closest comrades,” he thinks, were aware, at least, of “Odeh’s participation in armed struggle.” Others “accepted her at her word, perhaps having willingly suspended disbelief out of antagonism toward Israel.” What Lubet’s book makes clear is that they all should have known—for while Lubet uncovers new information, some of the most damning evidence he explores came out during the trial. In any case, the embrace of Odeh by advocates of “nonviolence” is less paradoxical than it seems. To embrace nonviolence as a strategy for winning favor in one context in no way precludes embracing violence in others. Even outside her close circle, some of Odeh’s supporters, one suspects, would have admired her no less had they known she was a killer. 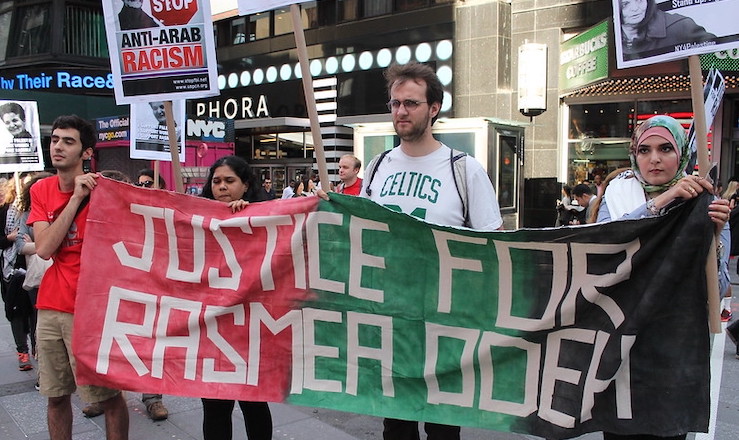