ormer CIA Deputy Director Michael Morell is not the first ranking official from the intelligence world to publish an account of his experiences. Still, the enterprise promised to be revealing enough that the New York Times and the Washington Post each published a story based on advance copies of the book. The Times headline read, “ex-CIA official rebuts Republican claims on Benghazi,” while the Post chose to focus on Morell’s confession that the agency had told policymakers that the 2011 pro-democracy uprisings in the Middle East would weaken al-Qaeda when, in fact, “the Arab spring was a boon to Islamic extremists.” 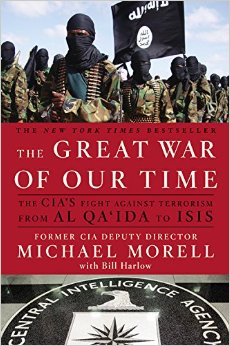 The Great War of Our Time, by Michael Morell

Neither story, however, captured the book’s thrust, hiding in plain sight on the cover: The Great War of Our Time.

The reason for these diverse readings, apart perhaps from the Times’s obsessive partisanship, may be that this book is not organized thematically. It is a memoir told chronologically. A bright graduate of the University of Akron, near his hometown of Cuyahoga Falls, Morell tells us that he aspired to become an economist but responded to a CIA recruitment pitch that launched his career on an unforeseen trajectory.

His work was entirely on the “analysis” side of intelligence, as opposed to “operations,” the term for the derring-do exploits that shape public images of the trade. He was good enough at it to climb the ranks into management, reaching the rung of deputy director and even serving two stints as acting director. He was with President George W. Bush at that Sarasota elementary school on the morning of September 11, 2001, as word arrived that an airplane—and then, tellingly, a second one—had crashed into the World Trade Center.

From this ensued Bush’s “global war on terror” and his successor’s responses to the same issues albeit with different rhetoric and tactics. Morell was at or near the center of much of it and professes to admire both presidents, although he clearly does not feel this way about all their aides or policies.

Morell is eager to stress the importance of intelligence work and the dedication of the anonymous patriots who devote themselves to it. “No department or agency has done more to keep the country safe than [the] CIA, and I wanted Americans to know that,” he writes. He argues with particular vigor in defending intelligence activities that have provoked controversy. On the origins of water-boarding and other measures that have been decried as “torture,” Morell writes:

Professional intelligence officers in the CIA’s Counterterrorism Center came to the leadership of the Agency and recommended using a set of harsh interrogation techniques. In short, they walked into the director’s office and said, “If we do not…Americans are going to die.” This statement was not hyperbole. It was exactly what our officers thought.

Not only were those officers sincere, Morell believes they were also right. “The best example,” he writes, “is that of 9/11 mastermind Khalid Sheikh Mohammed.” KSM was “fiercely defiant and unwilling to talk” before he was subjected to enhanced interrogation techniques. “After the techniques he was cooperative and willing to talk truthfully and answer almost any question asked of him.” The breakthrough yielded “a trove of critically important information.” Morell explains how this episode led indirectly to the agency’s success in locating the hiding place of Osama bin Laden: “information generated by [these methods] led us to push Abu Ahmed to the top of the list of leads we were pursuing on Bin Laden.” It was Abu Ahmed, often referred to as Bin Laden’s courier, who turned out to be harboring Bin Laden in Pakistan.

He also defends the use of drones, which has been repeatedly challenged due to reports of casualties inflicted on bystanders or other unintended targets. Morell writes: “These operations have been the single most effective tool in the last five years for protecting the United States from terrorists. There is no doubt in my mind that these strikes have prevented another attack on the scale of 9/11.”

Morell laments the illegal national-security disclosures of Edward Snowden, depicted by some liberals and libertarians as a benign or even brave whistle-blower. He reports that “within weeks of the leaks, terrorist organizations around the world were already starting to modify their actions in light of what Snowden disclosed.” Moreover, “Snowden[’s] actions played a role in the rise of ISIS.” Morell’s verdict: “Snowden has made the United States and our allies considerably less safe. I do not say this lightly: Americans may well die at the hands of terrorists because of Edward Snowden.”

While usually criticizing policies with which he disagreed only by implication, Morell lashes out directly at political figures of both parties who clashed with or trod on the toes of the CIA. He is harsh on Vice President Dick Cheney’s aide “Scooter” Libby, who he claims pressured the agency to exaggerate Saddam Hussein’s links to al-Qaeda. He lambastes Senator Diane Feinstein for producing a report on the CIA’s enhanced interrogation practices that “did a great disservice to…the country.” He also criticizes Attorney General Eric Holder for taking legal action against the intelligence professionals who engaged in these practices.

Regarding the 2012 Benghazi attack, it is true, as the Times suggested, that Morell goes after Republican senators, especially because some of them challenged his own integrity as well as the agency’s role in providing “talking points” drawn upon by Obama-administration representatives. But he does not exonerate the administration, nor is his indictment of those senators entirely compelling. He acknowledges that the CIA’s talking points contained errors that supported the administration’s preferred narrative—that the killers of Americans in Benghazi were enraged demonstrators rather than radical Islamists. But he insists that this was due to honest mistakes, not partisanship. And he points out that there were also misleading talking points from the White House and false statements by Susan Rice, who served initially as the administration’s mouthpiece on Benghazi.

Whatever the rights and wrongs, these quarrels are sidelights to Morell’s main message. “The threat of terrorism…did not die in Abbottabad along with Osama bin Laden,” he writes. “It is going to be with us for decades.” Although Morell has not a bad word to say about President Obama, the reference to Abbottabad reminds us how strenuously Obama and his team worked in 2012 to spread the impression that al Qaeda was on its last legs.

In contrast, Morell reports that one month into Obama’s second term he briefed the president, offering a starkly different assessment. “The overarching theme of my presentation…well before the rise of ISIS…was that the war against Islamic extremism was far from over…that [it] would be fought [for] generations.” What Obama, whose administration eschews the term “Islamic extremism,” took from this we cannot know. He apparently continued reducing the resources devoted to this “war,” another term Obama does not join Morell in using. Morell informs us that both the military budget, which is public, and the intelligence budget, which is secret, “have been falling for the last few years and they will likely continue to fall.”

Since Morell’s 2013 briefing to Obama, ISIS, which emerged from the chrysalis of Al-Qaeda in Iraq (AQI), has overshadowed its parent. If Morell refrains from knocking Obama directly, his account of ISIS’s rise is certainly damning:

The United States…worked over…years to get Iraq under control…and to destroy AQI. Great success was achieved by the end of the Bush administration…with AQI on the ropes. That progress continued through…2011 when the last U.S. troops were withdrawn from Iraq. AQI, however, benefitted from the vacuum—both because there was less military and intelligence pressure on the group but also because Prime Minister Nouri al-Maliki, without the United States in the country, felt emboldened to move ever more aggressively in an authoritarian direction, alienating and disenfranchising Sunnis at every turn. Moderate Sunnis began to support AQI.

The decision to withdraw the last troops from Iraq rather than negotiate a residual American presence there—as recommended by U. S. military commanders—was of course Obama’s. So, too, was the decision to ignore Syria’s burgeoning civil war, a choice that came with consequences that complemented those of his Iraq policy. Writes Morell:

AQI also benefited from its involvement in Syria [where it] changed its name to ISIS…ISIS added Syrians and foreign fighters to its ranks, built its supply of arms and money, and gained significant battlefield experience…Together with the security vacuum in Iraq and Maliki’s alienation of the Sunnis, this culminated in ISIS’s successful blitzkrieg across western
Iraq in the spring and summer of 2014.

Partly due to this, James Clapper, the director of national intelligence, testified, as Morell quotes, that “when the final accounting is done, 2014 will have been the most lethal year for global terrorism in the 45 years such data has been kept.” This implies that we are in fact losing this contest.

Morell’s lucid and informative account gives us a glimpse into a world of dedicated Americans who, toiling in obscurity, help to wage “the great war of our time.” They deserve a commander in chief who believes in what they are doing as deeply as they do.

The Palestinian Authority Loses Its Authority

Under the Black Flag