ension has been fed by colonialism that denied rights and opportunities to many Muslims, and a Cold War in which Muslim-majority countries were too often treated as proxies without regard to their own aspirations.” So said Barack Obama in Cairo five months into his presidency in a speech designed as the linchpin of his chief foreign-policy goal: improving U.S. relations with the Muslim world. Obama was giving voice to the thought widely shared among Western commentators and leaders that the agonies of the Middle East are traceable to the rough handling of the region by the Western powers—first European colonialists, then American cold warriors. Insofar as fallout from the region’s turmoil hits the West, this amounts to the chickens coming home to roost. 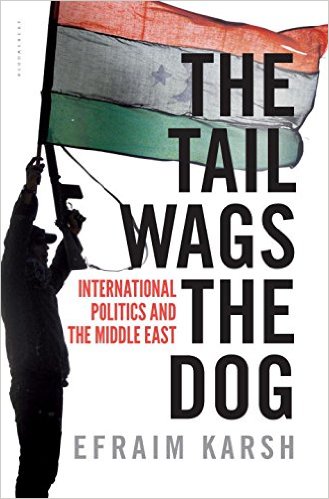 The Tail Wags the Dog, by Efraim Karsh

Efraim Karsh, a distinguished professor of Middle Eastern studies at Israel’s Bar Ilan University and professor emeritus at King’s College London, takes aim at this supposition in his short new book, The Tail Wags the Dog. “External influences, however potent, have played a secondary role,” Karsh argues, “constituting neither the primary force behind the region’s political development nor the main cause of its notorious volatility.” During the Cold War, however self-servingly the rival superpowers may have treated the Middle East, they found themselves “time and again . . . powerless to contain undesirable developments.” And today, “the region is sprinting Back to the Future [i.e., Islamism, salafism] and there is absolutely nothing the Western nations can do to reverse it.”

Most striking, Karsh challenges the received wisdom that the destinies of the core Middle Eastern polities—Syria, Lebanon, Israel, Palestine, Jordan, and Iraq—were largely shaped by Britain and France who divided these spoils seized from Turkey in World War I. The driving force behind this aggrandizement was neither Lloyd George nor Clemenceau but a local adventurer:

It was not the British government but Sharif Hussein of Mecca, perpetrator of the “Great Arab Revolt” against the Ottoman Empire, who provided the initial impetus for the creation of the modern Middle East by maneuvering the largest empire on earth to extend itself well beyond its original plans for the post-war era.

Karsh defends the infamous Sykes-Picot agreement of 1916, the secret bargain between London and Paris. In Karsh’s assessment, “the depiction of the Sykes-Picot Agreement as the epitome of Western perfidy couldn’t be further from the truth.” Far from aiming at the subjugation of the Arabs, this deal “constituted the first-ever great-power recognition of an Arab right to self-determination.”

Rather than the Western Europeans, it was their fellow Muslims, the Ottomans, who were the main colonizers of the Arabs, and what caused the spoliation of the Ottoman Empire was not the West’s avarice but its own. However creaky their empire, says Karsh, the Ottomans would have been able to keep it intact had they not entered the war, and this choice was not thrust upon them but made deliberately in the hope of gaining the upper hand over their great-power rival, Russia.

This foolhardy decision extended World War I into the Middle East, leading to the Balfour Declaration of 1917—which set the stage for the eventual birth of Israel and ignited a century of struggle between Jews and Arabs in the Holy Land. Karsh recounts the Arab pressures that impelled Britain to soon abandon Balfour’s policy and become the main outside opponent of the Zionist project—to no avail. After two decades of frustration, London returned its mandate to the newborn United Nations, which devised the partition plan for Palestine in 1947. But the UN, consecrated to the purpose of keeping the peace, proved helpless to prevent an Arab war against the aborning state of Israel. This gave the earliest indication that this new international body designed to surmount the structural flaws of its predecessor, the League of Nations, would prove no less impotent. The armistice lines left in 1949 at the conclusion of this first Arab–Israeli war rendered the UN’s partition map meaningless forever after. The action was driven almost entirely by the players on the ground.

This set a pattern that has held over the ensuing nearly 70 years. Karsh writes: “No regional dispute has attracted a longer and more sustained international intervention than the Arab–Israeli conflict, and few conflicts have been more impervious to outside influence.” He notes that landmarks in relations between the two sides have been achieved outside, or even in spite of, the feverish diplomatic interventions from abroad. Karsh instances, with interesting detail, the steps that led to Egyptian President Anwar Sadat’s momentous 1977 visit to Israel, noting that Sadat was motivated in part to preempt the Carter administration’s misconceived diplomacy. Carter and his team were aiming for an omnibus peace conference in which all of the Arabs would have constituted a single bloc. Sadat recognized at once what they could not: Such a delegation would be hostage to its more truculent members. If Carter in this sense deserves credit for the inadvertent fruits of his bungling, one wonders if similar credit will accrue to President Obama if Israel and Saudi Arabia achieve a rapprochement out of their shared abhorrence of Obama’s dogged appeasement of Iran.

The 1993 Oslo agreement between Israel and the PLO also was worked out behind the back of Washington, although it was solemnized in a ceremony on the White House lawn. Then the Americans took over, hoping to orchestrate the next step, a final resolution of the Israel–Palestinian conflict. Their efforts, as well as supplementary ones by the Europeans, have proved futile.

Karsh recites the absurd extremes to which the president and his administration have gone to avoid using the word Muslim in connection with any act of terror.


A more momentous example of what Karsh calls “the supremacy of indigenous dynamics in Middle Eastern affairs, and the limits of superpower influence” was the Iranian revolution of 1979, in the face of which the Carter administration was not only feckless but also clueless. As the revolt gathered steam, American diplomats in Iran expressed confidence that the shah was sitting firmly in the saddle, a misconstruction that President Carter glossed with his own characteristic unction. “Iran is an island of stability,” he told the tottering monarch in a toast as the year 1978 began, due to “the respect . . . admiration and love which your people give to you.” When the absurdity of all this became self-evident, the American Embassy reported home that, not to worry, the revolution’s leader, Ayatollah Khomeini, was a “Gandhi-like” figure.

Nor was Tehran the only Middle Eastern post where American representatives badly misread the local scene. More recently, as Syria began to unravel, the U.S. ambassador in Damascus offered a comforting assessment: “Assad is no Qaddafi. There is little likelihood of mass atrocities. The Syrian regime will answer challenges aggressively but will try to minimize the use of lethal force.”

As these whoppers exemplify, Karsh has an ear for the telling quote, as in this one presaging a long history of chilliness to Israel in the halls of the State Department: In response to the Balfour Declaration, Secretary Robert Lansing informed Wilson that his department opposed “turning the Holy Land over to the absolute control of the race credited with the death of Christ.”

The endless story of American bumbling in the Middle East has reached its apotheosis in the presidency of Barack Obama. Karsh recites the absurd extremes to which the president and his administration have gone to avoid using the word Muslim in connection with any act of terror or profession of extremism. Its aversion to even acknowledging the phenomenon of Islamism was exemplified by the testimony of Director of National Intelligence James Clapper that the Muslim Brotherhood is “largely secular” and by the president’s own dalliance with Turkey’s Tayyip Recep Erdogan, once described by associates as Obama’s favorite foreign leader.

The clear-eyed skepticism with which Karsh analyzes Middle Eastern politics is less in evidence when he looks back on the Soviet Union. Repeatedly he characterizes Kremlin actions as defensive—from involving itself in the Arab world to invading Afghanistan. While the grand ambitions of Ayatollah Khomeini are presented starkly, Karsh seems to think Soviet leaders did not harbor similar goals. He concludes that the defeat of Soviet forces in Afghanistan, which triggered the collapse of the Soviet state and empire, was a “pyrrhic victory” for America—as if today’s Islamists present a threat to the West equal to that of the USSR, the size of whose potentially world-annihilating arsenal exceeded our own.

Despite this, Karsh’s book is cogent and compelling. The New York Times in August published a long front-page feature story on three teenage British-born Muslim girls who slipped from their homes in London to join the Islamic State in Syria. The Times’s reporter, Katrin Bennhold, attributed their behavior in part to their victimization: The trio had been “buffeted by a growing hostility toward Islam and deep spending cuts that have affected women and young people in working-class communities like their own.” In other words, their choice to offer their bodies and souls to the world’s most bloodthirsty band of killers and rapists is in some sense the fault of British society. In the face of such flabby thinking, Karsh’s book is a welcome tonic. Its message is simply that the successes and failures, follies and crimes, of the Muslim world, just as those of any other segment of mankind, are first and foremost its own. 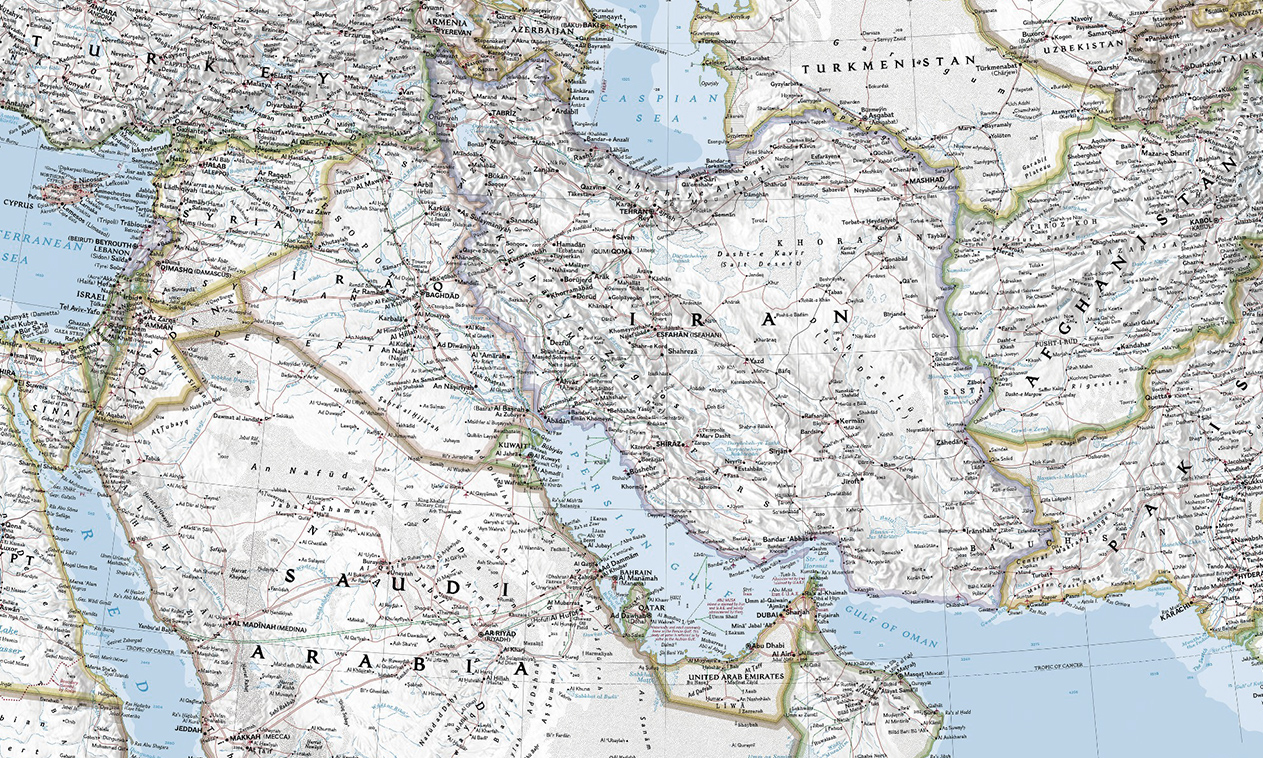