Ronald Reagan is inaccurately remembered as a warm man,” biographer Edmund Morris wrote in the New Yorker in 2004, but he was something closer to the opposite—closed, cool, self-contained. “Sooner or later, every would-be intimate (including his four children, Maureen, Michael, Patti, and Ron) discovered that the only human being Reagan truly cared about (after his mother died) was Nancy. For [Senator Paul] Laxalt, disillusionment came when the president called to thank him for his campaign help in 1984, only to pause in midsentence and audibly turn over a page of typescript.…For Michael Reagan, it was the high-school graduation day his father greeted him with ‘My name is Ronald Reagan. What’s yours?’…He trusted [Nancy’s] superior judgment of people but hardly ever asked her political advice; he did not even consult her about running for the presidency.”

Morris’s essay is titled “The Unknowable,” and now the difficult task of trying to know Ronald Reagan and to help others to know him has been taken up by Bob Spitz, a biographer of celebrities including Julia Child, the Beatles, and Bob Dylan. He is also the author of a book about the Woodstock festival. Which is to say, he is a man who has spent many years and much effort documenting the middle-ish part of the 20th century from the opposite side of the cultural divide that separated Ronald Reagan, the erstwhile New Deal Democrat, from the increasingly radicalized Democratic Party that began to emerge in the 1960s, a story told by Reagan in his habitual form—the one-liner: “I didn’t leave the Democratic Party; the Democratic Party left me.”

One can see the appeal for Spitz of a man such as Reagan, who operated at the intersection of celebrity and politics, making him an almost irresistible subject for a biography. Spitz should give some thought to writing one.

His book is packaged like a biography, with a biography’s title—Reagan: An American Journey—and a biography’s cover, with a black-and-white photograph of Reagan posing cinematically, broad-shouldered in a white T-shirt, leaning against a fence under a cloudless sky. Reagan is on the book, but Reagan is not in the book—the man simply is not there. Instead of a biography, Spitz has written a work of history, or rather a series of works of history, extraordinarily detailed and sometimes interesting accounts of a number of 20th-century episodes that had Ronald Reagan at their center.

Some of these are quite good. I cannot remember having read an account of the 1980 primary and general-election campaign quite so rollicking or engaging. Spitz has a perdurable interest in and tolerance for gossip and back-biting—score-settling among figures who already have been forgotten by almost everyone outside of the world of political nerdery or who are on their way toward it—which invests the work with the character sometimes described as “dishy.” Which is not to say that these data and observations are trivial; Ronald Reagan was one of the most consequential men of his time, and within all this he-said/she-said (the principal she being Mrs. Reagan), there are bits that are new and interesting, the sum of which will contribute meaningfully toward the project of bringing the remote Ronald Reagan a little closer to our understanding.

If Spitz is incapable of comprehending President Reagan, it is because he does not comprehend why Reagan desired to enter politics in the first place or what he hoped to accomplish—which is a severe disability for the would-be biographer. Spitz has Jonathan Franzen’s problem, the one revealed so plainly in the novel Freedom: He wants to write about conservatives and conservatism, but he is unwilling or unable to do the work of learning about them. In the same way that Franzen failed in his fiction, Spitz offers up to his readers a risible, cartoonish version of Reagan’s thinking, that of a man who began with nothing (or worse than nothing, in the case of Reagan, who was cursed with a deadbeat father) and made something of himself, largely through his own effort. And Spitz comes to believe that bootstraps are the beginning and the end of the story. “His own up-from-the-bootstraps story had left him with disdain for those who couldn’t manage the same feat.”

Of course that isn’t the case: Reagan was frank about the help he’d received along the way, and it was the New Deal that really brought him to politics. Reagan and those around him distinguished between programs designed to provide temporary assistance and those that by design or by bureaucratic inertia became instruments of open-ended dependency.

That distinction in Reagan’s mind, and in the minds of many of his generation, may not have been entirely a matter of program design. There are two halves to the welfare-warfare state, and the New Deal had better luck than did the Great Society: Franklin Roosevelt’s welfare-state initiative is conjoined in the American mind with World War II, the good war, a period during which the Depression-battered nation began to reclaim its self-respect; the Great Society, and Lyndon Johnson’s broader agenda, coincided with the unpopular misadventure in Vietnam, a period during which the nation grew to doubt itself and when patriotism was held up for ridicule. That the welfare initiatives and the wars were largely separate phenomena is immaterial to the way their respective eras sit on the national mind historically.

As Spitz notes, Reagan was not much of a historian and was not inclined toward heavy analytical thinking, but there was a great deal more to his thought than generalizing from his own personal experience. He was a dedicated reader of the conservative political journalism of his time and of libertarian-oriented political essays, and he understood Communism abroad and statism at home to be expressions of the same tendency toward centralization and regimentation at the expense of the individual.

For Spitz, this is just the impressionable Reagan getting “fired up with a fervent ideology that was informing every aspect of his life.” He writes: “Conservative journals like National Review, the Freeman, and Human Events fed his groaning prejudice against government bloat and excessive regulations.” The stupidity of these sentences is remarkable to see in print. Surely an opposition to bloat in government and a distaste for excessive regulation is something other than “groaning prejudice,” whatever that participle and noun together hope to mean. Spitz goes on to argue on the next page that Reagan “opposed JFK’s beneficence,” though it seems unlikely that Reagan would have opposed it if he had thought it was beneficence and not something else. He repeats the myth that Reagan’s “welfare queens” were the product of his imagination rather than actual people involved in actual welfare fraud. In fact, Reagan’s anecdotal Cadillac-driving welfare fraudster was named Linda Taylor; she lived in Chicago, was charged with fraud, was involved in some kidnappings, and may also have been mixed up in a murder. Recent inspector-general estimates of “improper payments” in the Temporary Assistance to Needy Families program run as high as 40 percent, though many of those improper payments are bureaucratic errors rather than intentional fraud.

Worse than Spitz’s shallowness is his mind-reading. He catalogues Reagan’s purported sins: “His lack of empathy for those in desperate financial straits and for AIDS victims, the supply-side Reaganomics, the punitive ‘war on drugs,’ the reckless spending on the military, stratospheric budget deficits, the implausibility of the Strategic Defense Initiative, Bitburg…”

“Empathy” is of course a literary device rather than an actual human experience (I suppose Spitz means “sympathy,” or that he does not know the difference), but knowing whether Reagan felt something for the destitute or for those stricken with AIDS requires knowing things that are: 1) not obviously knowable, having to do with the internal condition of the man’s soul, and 2) contrary to the public record, as Peter Huber’s reporting in City Journal on the Reagan administration’s actual response to AIDS demonstrates. Spitz assumes facts not in evidence, apparently in order to pad out a thin paragraph.

As for the rest of it, Spitz assumes “the failure of Reaganomics,” that the economic record of the Reagan years is not only one of failure but one of obvious failure, which is contrary to the data. Up for debate? Of course. But with 40 percent real GDP growth, the Reagan years saw what amounted to the addition of a second California to the U.S. economy. The Strategic Defense Initiative that he calls “implausible” laid the foundations for what is—right now—a national missile-defense system of “demonstrated capability,” in the words of the Pentagon’s chief weapons tester. This is shallow stuff and by far the worst part of the book. It is sloppy writing, sloppy research, and sloppy thinking.

The book is at its best when it sticks to straightforward reporting. A chapter called “The Big Mo,” in which Spitz follows Reagan through the primaries, offers interesting perspectives on the sundry pissing contests within the campaign and the role of the West Coast money men who had been trying to figure out what to make of Reagan—and how to make use of him—since 1968, when Reagan and the country were spared a candidacy for which he was not yet prepared. Reagan’s odd relationship with Gerald Ford is also dissected to some interest, with Reagan’s attempt to make nice being hilariously misconstrued by the former president, who apparently thought that Reagan was serious about bringing him back into the White House as a vice president and “co-president.”

It is mysterious why Spitz would put in so much obvious labor to produce a book that, while full of anecdote and detail, is hollow at its core. There is a great deal of stuff in this supposed portrait of this “American journey,” but very little of Reagan, either the man or his ideals. 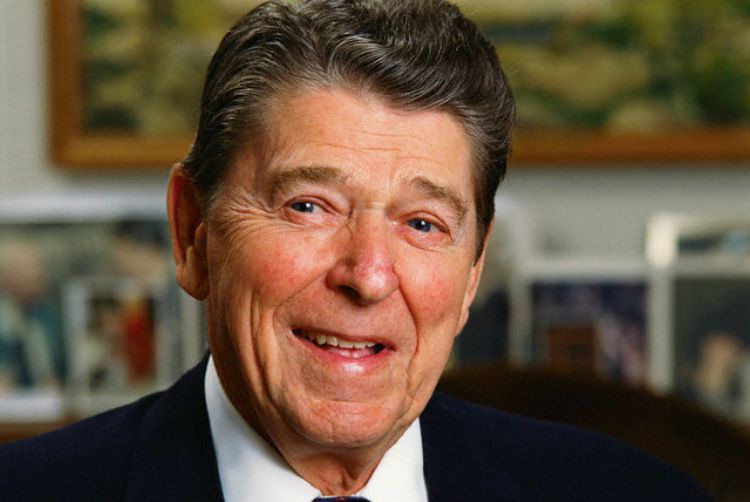