‘True Tales of America and Hope in the Time of Fentanyl and Meth.” So reads the subtitle of Sam Quinones’s latest, The Least of Us. I am not entirely convinced these tales are true—by which I do not at all mean to suggest that they are something other than factual, that they are inventions and fictions. Quinones is not that kind of bad writer. He is a different kind of bad writer, the kind who is capable enough—and sometimes much more than capable—when it comes to relating the stories recounted to him by the feckless sad sacks with which his terrarium of human failure is populated but, at the same time, utterly unable to organize those sad stories into anything other than the tired, hackneyed, shady-back-alleys-of-capitalism narrative that one expects from a 62-year-old Berkeley graduate.

Both men would probably loathe the comparison, but Quinones is in a sense a version of Tucker Carlson, another child of the old California aristocracy. Quinones is the son of a Harvard-educated Claremont professor, and he’s a former president of the Association of Literary Scholars and Critics later appointed to the board of the National Council for the Humanities by George W. Bush—but one who offers himself as a journalistic tribune of the plebs, a voice for a marginalized underclass he knows in an essentially anthropological way, who are not his people but his profession. I do not fault Quinones for being born to privilege; I blame him only for his failure to overcome the difficulties imposed by such an upbringing.

These deficiencies are both intellectual and moral, and, consequently, narrative. The Least of Us is mainly a series of potted biographies of junkies. There is Tom Ruah, who graduated from prescription painkillers to injecting heroin and described the experience as “like seeing God.” (One of the problems with telling junkies’ stories in their own words is that their accounts are almost invariably silly and self-aggrandizing, and packed with clichés on the level of “like seeing God.”) Ruah steals and cons his way through life until dying from an overdose of acetylfentanyl. There’s Lou Ortenzio, the junkie doctor who acts as a pipeline for other addicts and dodges prison but loses his medical license, becoming a pizza deliveryman before going on to work with other recovering addicts.

And there’s Joss Sackler, a standard-issue society-page grotesque. About her, Quinones writes:

The crowd tonight is here for a performance-art piece. The piece centers around Joss Sackler. Ms. Sackler has a PhD in linguistics; she owns a clothing line; she employs an entire PR team; she is said to be very interested in “women’s issues.” She is, above all, the wife of David Sackler, who is the son of Richard Sackler. Both men had resigned from Purdue Pharma’s board of directors a year earlier. Tonight’s event is billed as Joss et Ses Amis. That is French for “Joss and Her Friends.” But the event also has a subtitle. It’s in English: “Undeterred.”

Mrs. Sackler appears in a blue Elizabeth Kennedy evening gown, which is cut from her body piece by piece and burned as she stands on a rotating platform in the pose of an Olympic discus thrower. She is then spray-painted. The performance is photographed by Lynn Goldsmith, reported in Town & Country, and, of course, applauded. “Curated” wines are served, and Mrs. Sackler schmoozes with Keith Richards’s daughters before flashing her breasts at the audience, to additional applause.

The Sacklers are the villains of the book, and they are easy targets. Purdue Pharma’s executives and board members, the Sacklers prominent among them, took an attitude of indifference toward prescription drug abuse that was as Olympian as Joss Sackler’s discus-thrower pose. The firm has not exactly covered itself in glory. Quinones reports that opioid pain medication is “virtually its only product,” but that isn’t quite right; Dun & Bradstreet puts the sales of its Avrio Health subsidiary at about $200 million a year, enough to buy a truckload of Elizabeth Kennedy evening gowns and truckloads of curated wines. Avrio’s big products are Senokot, Colace, and Peri-Colace—all laxatives—Betadine antiseptics, and magnesium supplements, presumably a by-product of its laxative business. That’s an all-American portfolio: hillbilly heroin and laxatives, Betadine for life’s little scrapes, and dietary supplements, the communion wafer in the Reformed American Church of Self-Improvement.

The Purdue story is familiar enough by this point, an easily digested (hold the Senokot!) morality tale with corporate villains in black hats. That Quinones and much of the rest of the media, and the country, have accepted this simplistic tale more or less at face value is a very good example of why it is that we 21st-century Americans, owners of vast wealth and controllers of immense power, cannot grapple in a direct way with common, longstanding social problems.

It is not as though this is our first go-round with a national episode of socially destructive substance abuse. The Temperance League of yore didn’t just spring up out of atavistic Puritan disgust—widespread public drunkenness and private alcoholism were major social issues in the 19th century, and not only for old-stock Protestants worried about drunken Indians and Irishmen. The commercial press at the time was full of advertisements offering miracle cures for the scourge of dipsomania, including such famous and now forgotten products as the “Double Chloride of Gold Cure for Drunkenness.”

Quinones, whose 2015 book Dreamland proved to be key in alerting American elites to the opioid crisis, here demonstrates an unfortunate determination to force the complex facts of social life into a simplistic morality tale. In his rendering, addiction is something that simply happens to unhappy people.

Opioids may rob them of their health, their families, and even of their lives, but it is shallow moralists such as Quinones who would rob them of their humanity by recasting them as amoebae swept along by market forces without any sort of meaningful moral autonomy or personal agency. And it is, of course, precisely this abandonment—or rejection—of personal agency that is most characteristic of the personality of the modern American drug addict. Opioids are, in this telling, simply a storm that rolls into town to rain misery on those who do not have the resources to get in out of the weather. But the workaday publicists down in the marketing department do not, in fact, have the godlike powers ascribed to them by our voguish anti-capitalists. Purdue wanted to sell more pain pills and was willing to put considerable resources into pushing those out the door; Barnes & Noble would like to sell a lot more books than it does, but all the marketing money in the world is not going to get Americans to buy a book of poetry written by someone not named Dr. Seuss.

Religious writers and preachers often run into trouble with metaphor and analogy. Because God is so mysterious and so entirely alien to the human experience, religious writers often end up leaning very heavily on metaphor. An example is the metaphor of the judge for the demanding moral aspect of God, which Christian writers in particular often internalize so thoroughly that they reduce the Almighty to something like a literal judge in a court of law. Journalists writing about complex social problems often fall victim to the same tendency, taking the metaphorical “wiring” and “rewiring” of the human brain as literal, even though the similarity of the human brain to a computer or another electronic device is only superficial and analogical. Quinones has learned a little about the neurobiology of addiction, and he writes about the brain as though it were a literal mechanical apparatus, with parts that are “shut down” by drugs. He personalizes neurotransmitters and hormones: “Dopamine tells us” this, while “serotonin says” that. This is a way of transferring the agency away from human beings to neurobiological processes. But human beings are not mechanisms, and even the most powerful social force in modern American life—by which I mean moral cowardice—is not sufficient to make them so.

Quinones’s need to make everything about everything else leads him down some silly roads, i.e., his occasional clumsy forays into presenting capitalism and addiction as aspects of each other:

You can see the train wreck approaching, and then it arrives: “Adam Smith, in describing capitalism in The Wealth of Nations, called monopoly a ‘derangement’ and ‘hurtful to the society in which it takes place.’ That sounds to me like what’s going on in the addicted brain.” Normal stupidity cannot account for those sentences. That kind of nonsense requires a carefully cultivated mind.

I do not need reporting about opioid addiction to be a morality story that fits in with my own moral assumptions—in fact, I do not need it to be a morality story at all. I think of the placid Buddhists contemplating the end of the human species—and, hence, the end of human suffering—in Michel Houellebecq’s The Elementary Particles: “The Enlightened One, if he had meditated on it, would not necessarily have rejected a technical solution.” Mitigating destructive behavior, including the abuse of opioids and opiates, is likely to prove as much a technical (meaning medical) question as a moral one, in the long term.

What I do need is for the story not to be a morality tale with a cowboys-and-Indians level of moral sophistication that obscures the facts of the case. The Least of Us is an assault on intelligence in places, but mostly it is a missed opportunity—because there is much that is of interest in it. What happens to sugar-addicted rats when you give them a drug used to treat heroin overdoses? That very interesting scenario comes up in the book, but Quinones is too much of a dabbler—a neuroscientific dabbler, a moral dabbler, and a tourist—to make the most of it. 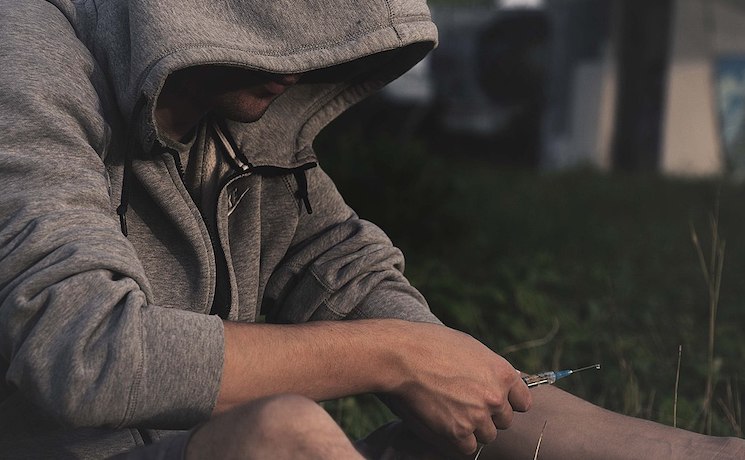