sk an American of a certain age where he was when John F. Kennedy was shot, and he’ll tell you. I suspect that you’ll get a similar result by asking Jews where they were on November 4, 1995, when Yitzhak Rabin was fatally shot leaving a peace rally in Tel Aviv.

It was Saturday night in Israel, and still Shabbat in America. I heard the news almost as soon as it happened, even though I was inside an Orthodox synagogue at the time. Some events have so much gravity that there’s no way to stop them from seeping through the walls and shattering the calm. Long before the era of social media, Rabin’s assassination was just such an event. 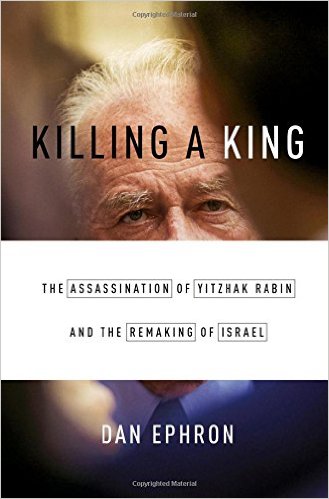 This unprecedented act of violence was a moment of dark change for Israel, and that was its intention. Its purpose was to derail the Oslo process and its design of leading to the creation of two states, a drive Rabin had formally undertaken with the signing of the accords in 1993. In its wake, Israel’s peace activists hoped the assassination would serve that aim—to be the ultimate demonstration that the peace process was the only way to keep Israel’s one-state radicals from killing not just Rabin and his peace efforts, but Zionism itself.

Over the past two decades, though, something strange has happened. The two camps have switched sides. Israel’s left bitterly credits Rabin’s assassin, Yigal Amir, with victory; the two-state solution is dead, they say, and its death throes began that night in 1995. Meanwhile, many of the leaders on Israel’s right, including its past two prime ministers, now essentially express their agreement with the goal of Oslo. The fulfillment of Rabin’s peace process, they say, will be necessary in the long term to secure a viable future for the Jewish state.

That is the actual story of what Dan Ephron calls, in the subtitle of his new book Killing a King, “the remaking of Israel.” But Ephron, the former Jerusalem bureau chief for Newsweek, doesn’t know it. His new account of the murder and its aftermath is an unsuccessful attempt to reconcile what might have been with what actually happened.

The virtue of Killing a King is its focus. Ephron does not try to widen the lens to the entire history of the peace process. Instead, he sticks with two narrative tracks—the development and initial implementation of the Oslo process and the radicalization of Yigal Amir—close at hand. But that focus is outweighed, overwhelmingly, by the book’s naked ideological agenda.

The Oslo accords weren’t Rabin’s idea, but the handiwork of Shimon Peres, his intraparty rival. Peres was then serving as foreign minister and conducting secret negotiations with Palestine Liberation Organization officials. The Labor Party under Rabin and Peres can basically be understood as the political version of Van Halen with both David Lee Roth and Sammy Hagar in the band at the same time. Rabin was so ill-disposed toward the concept of Oslo that he was reluctant to become the public face of the early draft agreement. But under pressure from Bill Clinton, who had agreed to let Yasir Arafat represent the Palestinians despite his status as a foreign terrorist, Rabin and Peres shared the spotlight and eventually the Nobel Peace Prize.

Around the time of the accords, Yigal Amir had finished his army service and moved back to his parents’ strictly Orthodox home in Herzliya. Yigal was smart and restless and seems to have chosen his course almost immediately. He hinted at it both to his brother, Hagai, and his father. His father told him the only way to bring about the government’s collapse was through prayer and Torah study, and to leave it to God’s will. Hagai, however, was inclined to see where his brother was going—and would eventually serve 16 years in prison as an accomplice.

Yigal enrolled in seminary at Bar-Ilan University, where he recruited fellow rightists for an underground militia whose purpose would be to disrupt the peace process and to target Palestinians for reprisal attacks. This plan proved to be a comical failure. Israeli rightists weren’t interested in doing anything more than protesting as a form of socializing. The one student Amir thought had promise, Avishai Raviv, was eventually recruited by Israel’s domestic security organization, the Shin Bet, to serve as an informer.

Once, at a wedding, Amir noticed Rabin was in attendance with virtually no security around him. Amir had his Beretta with him, and considered walking right up to Rabin and shooting him in the back of the head. But he hesitated, and Rabin left. It was clear, however, that getting to Rabin would be easier than he might have thought, and over time Amir gained confidence. “Amir was losing any inhibitions he might have had about telling people Rabin needed to die,” Ephron writes. “Raviv heard him say so repeatedly and so did [another friend]. On subsequent student weekends in the settlements, Amir declared it even with crowds of people gathered around.”

No one believed him. His friends and acquaintances seemed to think he was an eccentric braggart, not a violent revolutionary. Even the Shin Bet informant, Raviv, shrugged it off. Meanwhile, Amir continued to seek out opportunities to do the deed. In January 1995, he went to Yad Vashem with the intent to kill Rabin, who was scheduled to make an appearance there. Rabin was called to the scene of a terror attack instead.

He eventually got his chance at the peace rally on November 4. As Rabin was exiting the stage and heading to his car, Amir—who had been hanging out near the exit stairs for hours, completely unmolested by Rabin’s bodyguard detail—lunged forward and fired three times at the prime minister. Two bullets hit Rabin. He died at the hospital.

Ephron tells the story crisply, and the outlines are certainly correct. But the grinding of Ephron’s ideological bias is deafening. He tips his hand with barely veiled disgust when writing about Orthodox communities in Israel—especially settlers and Haredim. Ephron explains that Amir was raised in a mostly non-Orthodox area of Herzliya. He adds that this exposure to the glories of secular life could have “moderated” Amir’s religious fervor. Instead, it only taught Amir how to moderate the way he presented himself superficially to the world, wearing his tzitzit (ritual fringes) “tucked into his pants instead of protruding ostentatiously.” Condescension of this sort oozes from the pages of Killing a King.

Moreover, Ephron’s central thesis is demonstrably false. He writes that “Amir had set off a chain reaction that would shift the power in Israel from the pragmatists to the ideologues. Two decades later, the coveted peace remains elusive.” But is it pragmatic to push forward unflinchingly with a process—land for peace—that results, every time, in the opposite of peace? Or is it, rather, the result of an ideological commitment impervious to fact and reason?

Ephron’s own account proves it is the latter. As he tells it, after Rabin’s death, Peres has a choice. Having risen to the office of prime minister, Peres can call early elections against Benjamin Netanyahu’s Likud, over which polls give him a comfortable lead, or serve out the year left on Rabin’s term. Peres decides then and there to serve out the year because he wants his own peace deal to appear on his résumé before he stands for election. He doesn’t want the memory of Rabin to be the motive cause of a victory over Bibi. He wants to win due to a peace deal that is entirely his own.

But Peres doesn’t think he can conclude another agreement with the Palestinians. He looks to Syria, whose dictator, Hafez al-Assad, is interested in getting back the Golan Heights. Peres misreads Assad from the beginning. He offers to pull back on Israel’s security demands if Assad will agree to make the Golan a thriving industrial zone—as if Assad would have wanted to empower Syria’s private sector at his own expense. Peres thinks Assad is playing hard-to-get, but even fellow Israeli diplomats cringe at the new prime minister’s gullibility:

[Itamar] Rabinovich, one of Israel’s most astute Assad watchers, sensed a rebuff. “Assad generally preferred to make an agreement with Israel in the beginning of a prime minister’s term,” allowing time for an Israeli withdrawal before an election brought someone new to power. “I don’t think he ever intended to complete a deal with Peres,” he would recall.

Eventually, Peres is compelled to call early elections, and he loses. He had hoisted himself on his own peace-at-almost-any-price petard. One can discern the outlines of this in Ephron’s book, but the author resists the conclusions to which his own account leads.

Even worse, Ephron’s account is filled with the kind of on-the-one-hand-on-the-other moral equivalence intended to suggest that Palestinian extremists—specifically Hamas—and Israeli extremists posed comparable threats to Oslo. Regarding a Hamas-linked suicide attack on a bus departing Ashkelon early in the Oslo era, Ephron writes: “Lone extremists, Palestinian or Israeli, could easily undermine what the two sides would now devote much of their energy to achieving….The episode would replay itself again and again in the coming years.”

In order to justify the framing of this as a mutual phenomenon, Ephron spends an inordinate amount of time on Baruch Goldstein’s 1994 massacre of Palestinians at the Cave of the Patriarchs in Hebron. He uses the murder spree to play his equivalence game. But Ephron doesn’t understand that the example of Goldstein’s evil act actually makes the opposite of his intended point: He returns to it so frequently because he has no other examples. Jewish terrorism was and is a rare phenomenon, while Palestinian terrorism was and remains routine.

Moreover, as the supposed Palestinian commitment to a two-state solution has proved to be nothing but a dovish pipe dream in the 22 years since the signing of the Oslo accords, Israel’s rightist leaders have taken controversial steps to implement the geographical and legal separation between the Jewish state and the Palestinian body politic. In his first term as prime minister, Netanyahu signed a deal with Arafat that required Israel to disengage from parts of the West Bank—including, crucially, Hebron. Ariel Sharon would later leave all of Gaza behind. Sharon’s successor, Ehud Olmert, would offer the Palestinians a more generous peace deal than the Laborite Ehud Barak had at Camp David in 2000—and only recently, Palestnian Authority chief Mahmoud Abbas acknowledged he had been the one to scuttle Olmert’s offer just as Arafat had scuttled Barak’s. By the time Netanyahu returned to the prime minister’s office in 2009, he was willing to do things Rabin never did: publicly support Palestinian statehood and even hint at dividing Jerusalem.

All the spin in the world can’t change the fact that the current Likud prime minister stands today to the left of Yitzhak Rabin in 1995. Yigal Amir received the ultimate punishment for his hubris: His monstrous act actually advanced the peace process inside Israel. Nothing anyone can do seems to be able to advance the process for the Palestinians, who want none of it.

Seth Mandel is executive editor of the Washington Examiner.