The president-elect faced a divided nation. He won by narrow margins in several states. His opponents said he was illegitimate, a pretender. Neither party was satisfied with the outcome. His party lost seats in the House. The Senate was tied. And so George W. Bush pledged to govern for all Americans. “After a difficult election,” he said in his December 13, 2000, victory speech, “we must put politics behind us and work together to make the promise of America available for every one of our citizens.”

Twenty years have passed. And it’s the same story.

This time, of course, the president-elect is a Democrat. But Joe Biden, like George W. Bush, owes his win to a relatively small number of voters in a few states. And Biden’s party, like Bush’s, is disappointed in the results of the congressional elections. The Democratic House majority is in peril. As for the Senate, the Democrats’ best-case scenario is winning both of the runoff elections in Georgia on January 5. That would hand the gavel to Chuck Schumer and grant Vice President–elect Kamala Harris the tie-breaking vote—exactly what happened for Bush with Dick Cheney beginning January 20, 2001.

Biden has also called for unity. “I ran as a proud Democrat,” he said on November 7. “I will now be an American president. I will work hard for those who didn’t vote for me—as for those who did.” He added that he believes the American people “want us to cooperate.” Partisanship, Biden said, is “a decision…a choice we make.” According to this logic, we might just as easily choose to be bipartisan. And because Biden has known Senate Republican leader Mitch McConnell for decades, there is hope in the Beltway for a renewal of a bygone era when the two parties worked out their differences over after-hours cocktails. “As Biden prepares to take office and lead a nation gripped by crisis and turmoil,” gushed the Washington Post, “the two men, both nearing 80, hold the potential to reach bipartisan agreements that can redefine the scope of government and shape the nation’s economy.”

Don’t hold your breath. The United States is not due for a second “era of good feelings.” It is far more likely that the politics of the next two years will look a lot like the politics of the past 20 years: an ongoing, oscillating clash between two parties that are closely divided electorally but deeply divided ideologically. Yes, Biden might find some Republican support for a coronavirus bill (provided that one doesn’t pass during the lame-duck session of Congress) or an infrastructure plan. He probably will get most of his cabinet appointments. Beyond the odd trade agreement or arms treaty, however, it is hard to see where he peels off enough GOP senators to score a genuine bipartisan accomplishment.

This stalemate, Biden will likely say, is a failure of will. That would be an incorrect reading. It is the result of the different ways Democrats and Republicans see the world. It is the consequence of a profound disagreement over values, over how best to improve America. Over the past several decades, Republicans have become more conservative, and Democrats more liberal, as more and more Americans move to places with uniform politics. “In 1980,” reports the Wall Street Journal, “391 of the country’s more than 3,100 counties were ‘landslide’ territory: places where the presidential vote split was at least 20 points more partisan than the nation overall.” In 2000, there were 600 landslide counties. And in 2020, there were 1,726. That is not a recipe for bipartisanship.

“Unity” and “cooperation” are far more common when one party holds a lopsided advantage. Think of the enfeebled Republican congressional minorities during the late 1980s and early 1990s, one of whose leaders Newt Gingrich derided as a “tax collector for the welfare state.” When he became minority whip, Gingrich urged his House colleagues to draw sharp contrasts with the Democrats. He told them to attack President Clinton’s agenda relentlessly. In 1994, his strategy paid off. Our current partisan merry-go-round commenced, with the two parties rotating in and out of power in various offices and different levels of government. Unified government, divided government, a Republican president with a Democratic House and a Republican Senate, a Democratic president with a Republican House and a Democratic Senate—we’ve seen it all.

And we’ve lived to tell the tale. One of the ironic features of this period of unstable majorities is that, even as demand for bipartisanship rises, incentives for cooperation fade. The parties’ hold on power is so tenuous that every concession disheartens supporters and energizes opponents. Blocking your adversary, on the other hand, rallies your base. It denies him a win at least until the next election.

Which is why grand aspirations for cooperation and comity fall flat. President Bush’s agenda, for example, was designed to appeal to the moderate and conservative Democrats of his era. In addition to tax cuts and Social Security reform, he pursued education reform and Medicare coverage for prescription drugs, as well as comprehensive immigration reform. The Democrats opposed him anyway. The majority of them voted against the tax cut and Medicare Part D. Social Security accounts never made it to committee. Thirteen Democrats joined the 2007 filibuster of Bush’s immigration proposal. Only No Child Left Behind became law with majority Republican and Democratic support. Today many Republicans wish they had voted otherwise.

Did Democrats ever come to regret their record of enmity and obstruction? By my count, only once. Most of them voted against the bill to establish the Department of Homeland Security that passed the House on July 26, 2002. When the legislation arrived in the Democratic-controlled Senate, then Majority Leader Tom Daschle sat on it. Organized labor wasn’t satisfied with its provisions. Republicans made his obstinance an issue in the 2002 midterms. It helped them win control of the Senate. You might remember that election. It’s the one where James Carville put a trashcan over his head.

But 2002 is the exception. The Democratic coalition benefited from its outright opposition to the Iraq surge in 2006 and 2007. Conversely, the Republican strategy of fighting Barack Obama’s stimulus, health-care bill, and cap-and-trade scheme paid off in 2010 and, later, in 2014. When Donald Trump took office in 2017, the Democrats joined the far-left “Resistance.” They demonized, denounced, and eventually impeached him. They took the House in 2018 and the presidency in 2020.

Bush and Obama thought they could unify the nation around them. They failed. Trump, for better or worse, never really tried. Now it’s Biden’s turn. Under pressure from both the progressive left and the conservative right, he’s in for a similar lesson: Only a catastrophe can bring this huge, diverse, expansive, boisterous, eccentric, argumentative nation together. And then not for long. 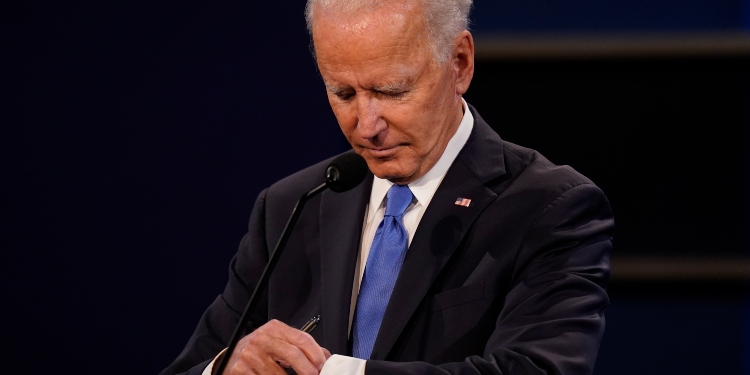