ernie Sanders trounced Hillary Clinton by more than 20 points in February’s New Hampshire primary. But it’s the exit poll that ought really to worry Clinton, her campaign, and her fans in the media. Why? Because a third of the Democratic primary electorate said honesty was the top quality they are looking for in a presidential candidate. And these voters broke for Sanders by one of the most whopping, staggering margins I have ever seen: He won them 92 percent to 6 percent.

The same thing happened in the Iowa caucuses. Sanders and Clinton basically tied, but there, too, the Vermont senator benefited from distrust of Clinton. About a quarter of Iowa Democrats said honesty was the most important quality in a candidate. Sanders won these voters 83 percent to 10 percent.

Remember: These are Democrats we are talking about. If a Republican won on honesty by similar margins in a general election, Clinton’s dream of returning to the White House as president would be over. Honesty and trustworthiness aren’t just issues for Clinton. They are potentially fatal weak spots. They could doom her campaign.
I bring these numbers up because for months Democrats and journalists have argued that the honesty gap wouldn’t be a problem. Whenever the former secretary of state has been caught lying about her private email server, her apologists have said that the serial dishonesty is a meaningless distraction that won’t affect how people vote. Shows you what they know.

Back in June 2015, for example, Time magazine published a story asking: “Does Hillary Clinton’s Trustworthiness Matter?” The Democratic pollsters quoted therein said no, it does not. “People are looking first and foremost for someone who will look out for them, fight for them, get things done for them,” said Geoff Garin. “At the end of the day,” said Celinda Lake, “the trust dimension that matters to people is what they will do to look after them.”

These assumptions have driven a lot of the messages that come from the Clinton campaign. The Time piece quotes campaign manager Robby Mook—who may be the former campaign manager by the time you read this article—as saying, “I am absolutely confident when she lays out her case it will be very clear to people that she will be that champion to stand up for them every single day.” Indeed, Clinton is always talking about how she’s going to fight for you—unless of course you happen to be a Republican or a member of the NRA, in which case she’s going to fight against you.

But the problem for Clinton is that her assumptions are wrong. Not only do Democrats care about honesty and integrity, they also do not trust Clinton to “fight” or “look after” or “care” for them. The quarter of Iowa Democrats who said that “cares about people” was its top candidate quality went for Sanders 74 percent to 22 percent. And the quarter of New Hampshire Democrats who said the same went for Sanders 82 percent to 17 percent.

Thing is, Hillary Clinton’s shoes are so muddy she can hardly walk. And she has nothing approaching her husband’s political talent and ability to escape from compromising situations.


Another way to spin the honesty gap is to say that other issues will matter more in a general election. “We are still 18 months from the general election,” Ed Rendell said on MSNBC last August. “And this email stuff is playing out now. Will it be pertinent come September, October, November of next year? I doubt it.” Ed has a point—maybe the FBI will come for Hillary before summer turns to fall.

Greg Sargent, the liberal blogger for the Washington Post, reassured his audience by citing academic research. There are “studies,” he said, “that show a weak correlation between such personal traits and the outcomes of presidential elections.” Economic and social conditions “matter more than personal attributes in determining electoral outcomes.” So, as long the economy is good and President Obama is popular, Hillary can lie and cheat all she wants.

There’s no way of forecasting what the world will look like in November, though the global economic outlook is troubling to say the least. But we can say that conditions did not help Clinton in the first caucus and primary. Clinton does best among the well-off—among the sort of voter who may have been in the audience at one of her speeches to Goldman Sachs. She won Iowa caucus goers who make $100,000 or more a year by 20 points. But a plurality of Iowa caucus goers reported annual incomes of less than $50,000. And these voters went for Sanders 53 percent to 44 percent.

After eight years of a Democratic presidency, an incredible 80 percent of New Hampshire Democrats said they are worried about the U.S. economy. And Sanders took these voters two to one: 65 percent to 34 percent. If the Democratic primary electorate is this dissatisfied with the present state of America, explain to me again how national conditions will benefit Clinton in the fall.

Ronald Brownstein, of National Journal, has written the most sophisticated explanation for why Clinton can overcome the honesty gap. As he put it last year, “empathy, faith in her competency, and ideological compatibility will count more than integrity in shaping voters’ verdict on Hillary Clinton—just as they did for her husband.” Brownstein points to the 1996 election, when Bill Clinton won reelection despite 54 percent of voters who said he wasn’t honest or trustworthy. “Bill Clinton’s experience suggests that if Americans believe she can walk in their shoes, they will accept plenty of mud on her own.”

Thing is, Hillary Clinton’s shoes are so muddy she can hardly walk. And she has nothing approaching her husband’s political talent and ability to escape from compromising situations. Note that it was only a slight majority that said Bill Clinton was dishonest in 1996. The number that says his wife is untrustworthy is far greater. And note too that 20 years of scandal and controversy have passed since the public delivered its ambivalent verdict on Bill Clinton’s first term. Only four years after Clinton’s reelection, George W. Bush won the Electoral College by pledging to restore honor and integrity to the White House. Who do you think he had in mind when he said that?

Hillary Clinton is a weak candidate distrusted by the voters in her own party. But she has a secret weapon. “You can still win an election and be underwater on trustworthiness if the other candidate is even worse than you,” Republican pollster Neil Newhouse told Time magazine. Hard to think of someone the public would trust less than Hillary. But if anyone fits the bill, it would be the man whose last name rhymes with grump. 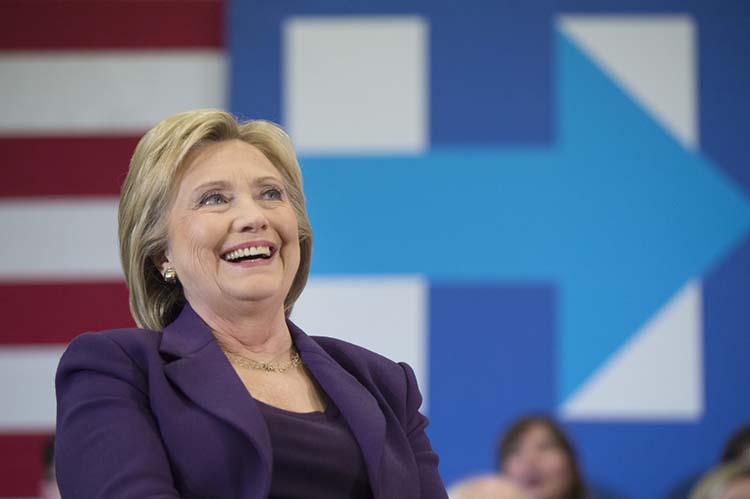