You remember Barack Obama. He was still more than a year away from becoming president when journalists began using the “T” word to describe his significance. The word is transformational. It’s the media’s favorite adjective when referring to Democratic politicians. Obama’s candidacy, Andrew Sullivan wrote in the fall of 2007, “is a potentially transformational one” because, “unlike any of the other candidates, he could take America—finally—past the debilitating, self-perpetuating family quarrel of the Baby Boom generation that has long engulfed all of us.” Obama himself said his presidency would be “the moment when the rise of the oceans began to slow and our planet began to heal.” He spoke of “fundamentally transforming the United States of America.” David Brooks believed Obama’s “perfectly creased pant” revealed that the freshman senator from Illinois would become president and that “he’ll be a very good president.” MSNBC host Chris Matthews admitted that “I felt this thrill going up my leg” while listening to Obama talk. In the spring of 2009, during President Obama’s first trip to the Middle East, Newsweek’s Evan Thomas said that “in a way Obama’s standing above the country, above—above the world, he’s sort of God.”

By 2012, Obama had fallen to earth. The Republicans had captured the House and made inroads in the Senate. His reelection was in doubt. But his boosters never wavered in their conviction that Obama was a transformational figure who governed an administration of colossal importance. Paul Krugman described his fellow Nobel laureate as “one of the most consequential and, yes, successful presidents in American history.” Shortly after he won a second term, Slate featured a column with the headline “The Transformative Presidency of Barack Obama.” The tributes continued despite the Republican takeover of the Senate in 2014, the election of Donald Trump in 2016, and the utter ruin of the Democratic Party at the state and federal level by the time Obama left office. “The breadth and depth of the transformation wrought by Obama’s presidency is vast,” wrote a columnist for New York magazine. “Not since Lincoln has there been a president as fundamentally shaped—in his life, convictions, and outlook on the world—by reading and writing as Barack Obama,” wrote the New York Times book critic Michiko Kakutani in what has to be one of the most ridiculous sentences ever to have appeared in her paper. “The idea that she should have been the candidate to replace this inspiring new person who really did transform America,” Andrew Sullivan said of Hillary Clinton, “was itself a joke.”

Now the joke’s on Obama. If the media treats each successive Republican president as more terrible than the last, it also celebrates every Democratic president as more transformative than the ones who came before. Today, liberal pundits hold up Obama’s early years in office as an example of what not to do as they slather his former vice president in purple prose. “Where the Obama administration’s approach was too often clever and strewn with budgetary wonkiness,” writes the Atlantic’s Derek Thompson, “the Biden formula should embrace the opposite: big, fast, and simple.” According to the Washington Post, “the opening months of the Biden administration have provided the Democratic Party with a rare ‘do-over’—a chance to enact wide-ranging agenda items far more quickly and on a larger scale than in 2009.” The emerging conventional wisdom is that Obama was too cautious, too hesitant, too bipartisan (yes, you read that correctly) for his own good. “I applaud Obama for doing health care and saving the economy,” Senator Cory Booker told the Atlantic. “But a lot of Americans felt that that was them losing their autonomy over their health care and a big Wall Street bailout. Then we got demolished in the midterms.” The pant leg, in other words, is wrinkled, the thrill is gone, the transformation interrupted. No longer is Obama “sort of God.” Instead, he’s a cautionary tale.

As Obama’s reputation loses value, Biden’s inflates. The 78-year-old white guy is the world-historical statesman du jour. “Biden is such a familiar figure that many campaign reporters haven’t seriously scrutinized his policy or biography or coterie of advisers,” Franklin Foer wrote in the Atlantic last October. “Closer attention would have revealed a trail of evidence that suggests the sincerity of his transformational ambitions and a plausible plan for actualizing them.” When Biden moved into the White House, the nation’s copy editors must have insisted that every mention of the new president include his capacity for sweeping change. By early March, after the passage of the American Rescue Plan, the headline of David Brooks’s New York Times column announced that “Joe Biden Is a Transformational President.” Two weeks later, in a report on a meeting between Biden and a group of telegenic historians, Mike Allen of Axios panted, “Biden’s presidency has already been transformative, and he has many more giant plans teed up that could make Biden’s New Deal the biggest change to governance in our lifetimes.” The Economist took the long view, observing that “transformational presidents often arrive as curious avatars.” It got the curious part right.

Analogies between Biden and the architect of the New Deal have become common. The Economist featured an illustration of President Biden looking into a mirror and seeing not his own reflection but that of the man who led America through the Great Depression and World War II. Examining the polls after Biden’s first 100 days in office, economist Jeffrey Sachs wrote, “This broad support provides a foundation for Joe Biden to become the most transformative president since Franklin D. Roosevelt.” Biden might not be a clone of FDR, David Gergen admitted, but “he bears some important similarities.” Both men, for example, share “inner emotional strength.” Both have been “joyful” in “exercising power.” And “the most obvious comparison is of the two presidents’ records of accomplishments.”

As the president might say: C’mon, man. It is precisely Biden’s lack of a record that makes the comparison with FDR premature. As I write, he has signed into law just one significant piece of legislation. Justified as a remedy to the coronavirus pandemic, the American Rescue Plan is a $2 trillion heap of payments to taxpayers, state and local governments, small businesses, and hospitals. Biden has announced his support for two additional bills, combining for a total of about $4 trillion more in spending on Democratic priorities. But the success of either initiative is by no means guaranteed. Biden’s approval rating, while positive, is not anything to write home about. His congressional majorities are razor-thin. And even if the American Jobs Plan and the American Families Plan do become law, they won’t constitute a fundamental restructuring of the welfare state.

Indeed, Obama has a better claim to be “transformational” than Biden. Not only for crossing the color line and becoming America’s first black president, but also for creating a universal entitlement to health insurance. That was a dream of every Democratic president since Harry Truman. And Obama accomplished it—at the high price of his popularity and a Democratic Congress. Saying a decade later that it was no big deal is like saying The Exorcist wasn’t scary because scarier movies came out after it.

The former president must become infuriated when he listens to the same talking heads who treated him as a philosopher king shower their affections on a man he dismissed for eight years as a friendly bungling goofball. His self-regard is legendary. The diminution of his reputation has got to hurt. Nor can you really blame him for feeling unappreciated. Reading another fawning and totally unsupported account of Biden’s transformative powers the other day, I felt a sensation I never thought I’d experience: sympathy for Barack Obama.

Don’t worry, though. The moment passed. 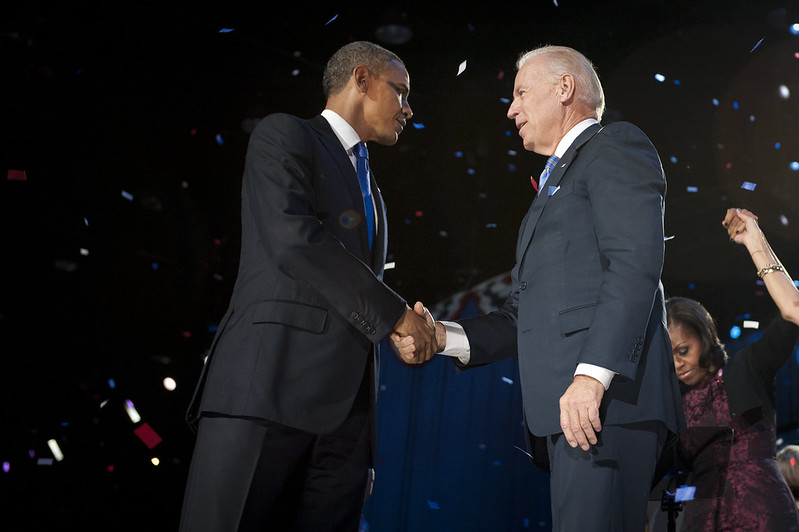