On February 9, the day before the New Hampshire primary, Joe Biden held a slim lead over Bernie Sanders in the Real Clear Politics average of national Democratic-primary polls. That advantage collapsed after Sanders won New Hampshire. It fell ever further after Sanders swept the Nevada caucuses the following week.

Then something remarkable happened. After Biden won the South Carolina primary on February 29, his national polling numbers spiked. By the time he won 10 of the 14 states on Super Tuesday, March 3, Biden was back on top. All in 72 hours. Call him the once and future front-runner. This stunning comeback did more than reestablish Biden’s position. It also reinforced some longstanding rules of politics. Let’s look at four of them.

First, late entrants rarely win. Michael Bloomberg announced his campaign for president on November 24. His supporters argued that he had Biden’s positive aspects (experience in office and a moderate tone) without Biden’s liabilities (weak fundraising and a tendency to go off on rhetorical flights of fancy that leave audiences puzzled if not concerned).

It was thought that Democratic voters spooked by Sanders would embrace the former New York mayor as their last opportunity to defeat Donald Trump. “He might not be exactly what they had in mind,” John M. Ellis said of Bloomberg in the Washington Post, “but by Super Tuesday he’ll look like Brad Pitt.”

Danny DeVito is more like it. Bloomberg withdrew from the race on March 4, having amassed a measly 61 delegates and winning, of all places, American Samoa with 175 votes out of 351 cast. Then he joined the ranks of men who have entered campaigns late in the game to great fanfare only to wind up as losers.

General Wesley Clark, the former NATO commander, shot to the top of the Gallup poll within a week of announcing his candidacy on September 17, 2003. A month later, however, the general withdrew from contention in Iowa. He pinned his hopes on New Hampshire. His third-place finish there was enough for him to compete in seven states, including South Carolina, the following week. He ended up winning Oklahoma by a slim margin. He was out the next day.

The late Fred Thompson (1942–2015), senator from Tennessee, faced a similar problem four years later. He entered the Republican primary on September 5, 2007, and departed on January 22, 2008, a few days after finishing third in South Carolina. Conservatives heralded Thompson as a natural communicator and principled statesman who would draw contrasts with the moderate mush of John McCain, Rudy Giuliani, and Mitt Romney. And Thompson was gifted, and decent, and funny. He was also more interested in watching SportsCenter on the campaign bus than in mixing it up with supporters.

Sometimes late entrants join the race out of ego. Sometimes they make the mistake of believing their own press. Bloomberg fell prey to both temptations. Like Clark and Thompson, he had to play catch-up with opponents who had been running for president for two years by the time voting began. “He went from zero to 80 in one night,” one of Clark’s aides said of his boss in 2004. And soon ran out of gas.

Second, money isn’t everything. “Mike Bloomberg builds a general election campaign to show strength for his primary bid,” Jeff Zeleny of CNN wrote in December. “He’s paying top dollar to some of the most talented political strategists in the country, including hiring key operatives from Barack Obama’s previous campaigns. He’s hiring hundreds of staffers and opening offices in pivotal swing states. He’s spending more money on advertising than all of his leading rivals combined.”

Indeed, he was. And all for nothing. The Wall Street Journal estimates that Bloomberg spent “at least $620 million” of his $64 billion fortune to win, in the end, an island 4,800 miles from the mainland. For a time, it seemed as if every other ad on television was paid for by Bloomberg’s campaign. His fellow billionaire Democratic aspirant, environmentalist and impeachment activist Tom Steyer, spent around $250 million for his own failed candidacy.

These numbers cause fainting spells in the offices of Democracy 21 and other groups agitating for campaign-finance reform. But they had no discernible effect on the outcome of the primary. Nor did Jeb Bush’s $130 million in the 2016 Republican contest, or for that matter Hillary Clinton’s $768 million in the general election where she outspent Donald Trump by about 2 to 1. (Trump benefited from an advantage in “earned media,” or free publicity.)

“The picture of the prettiest girl that ever lived,” wrote Joseph Schumpeter, “will in the long run prove powerless to maintain the sales of a bad cigarette.” It’s the same with campaign donations. No amount of positive advertising can substitute for a flawed candidate. Money doesn’t decide elections. Voters do.

Third, woke doesn’t work. The Democrats who assumed that a presidential election is actually a competition to see who can be the most “woke” did not make it past Super Tuesday. The first to flop was Vanity Fair cover model Robert Francis “Beto” O’Rourke, whose proclamation, “Hell yes, we are going to take your AR-15” scared more people than it persuaded. He dropped out November 1.

Next to go, on December 6, was Kamala Harris. Her ambush of Biden for opposing busing in de facto segregated school districts 40-plus years ago won her applause from the social-justice left. But it couldn’t make up for her clumsy defense of Sanders’s Medicare for All proposal, or for her record as a prosecutor in San Francisco and California, or for her awkward style on the trail.

Julián Castro’s turn came on January 6. Remarkably, his plans to decriminalize illegal immigration, abolish Immigrations and Customs Enforcement, and guarantee abortion rights for trans women—the prize is yours if you figure that one out—failed to catch fire.

Finally, there was Elizabeth Warren. Her wonky “I have a plan for that” persona and devotion to taking selfies with liberal Democrats won her rave reviews from the press, filled as it is with wonks and liberal Democrats.

The problem with plans is that they are subject to scrutiny. Voters blanched when they looked at the tax hikes necessary to finance Warren’s transformation of American capitalism and her abolition of private insurance. By the end of the campaign, Warren was promising that her nominees for secretary of education would be interviewed and approved by a “young trans person.” She failed to win a single contest and dropped out March 5.

Finally, electability matters. It’s a slippery term, “electability.” How can one know who has the best shot to defeat an incumbent months before the general election begins in earnest? Elusive and undefined it may be, but notions of “electability” count for a lot when challenging a sitting president.

The primary voters who handed Bob Dole victory in South Carolina in 1996 thought he was the most electable Republican against President Bill Clinton. In 2004, Democrats went with John Kerry because they believed he had the best shot at defeating George W. Bush. In 2012, a large majority of Republicans told pollsters such as Gallup that Mitt Romney was the most electable candidate against President Barack Obama. Recently the Economist surveyed online betting markets and found that Biden has the best chance of defeating Trump.

Democrats in South Carolina, Virginia, Texas, and Minnesota must have noticed the president’s eagerness to face Bernie Sanders this fall. They decided not to give Trump what he wanted and chose Biden instead. They went for the most “electable” candidate. 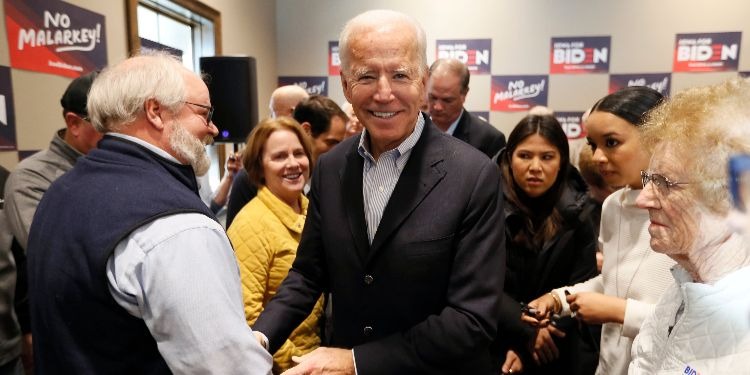