resident Trump, in case you haven’t noticed, has a tendency to exaggerate. Nothing is “just right” or “meh” for him. Buildings, crowds, election results, and military campaigns are always outsized, gargantuan, larger, and more significant than you might otherwise assume. “People want to believe that something is the biggest and the greatest and the most spectacular,” he wrote 30 years ago in The Art of the Deal. “I call it truthful hyperbole. It’s an innocent form of exaggeration—and a very effective form of promotion.”

So effective, in fact, that the press has picked up the habit. Reporters and editors agree with the president that nothing he does is ordinary. After covering Trump for more than two years, they still can’t accept him as a run-of-the-mill politician. And while there are aspects of Donald Trump and his presidency that are, to say the least, unusual, the media seem unable to distinguish between the abnormal and significant—firing the FBI director in the midst of an investigation into one’s presidential campaign, for example—and the commonplace.

On September 6, the president held an Oval Office meeting with Vice President Pence, Treasury Secretary Mnuchin, and congressional leaders of both parties. He had to find a way to (a) raise the debt ceiling, (b) fund the federal government, and (c) spend money on hurricane relief. The problem is that a bloc of House Republicans won’t vote for (a) unless the increase is accompanied by significant budget cuts, which interferes with (b) and (c). To raise the debt ceiling, then, requires Democratic votes. And the debt ceiling must be raised. “There is zero chance—no chance—we will not raise the debt ceiling,” Senate Majority Leader Mitch McConnell said in August.

The meeting went like this. First House Speaker Paul Ryan asked for an 18-month increase in the debt ceiling so Republicans wouldn’t have to vote again on the matter until after the midterm elections. Democrats refused. The bargaining continued until Ryan asked for a six-month increase. The Democrats remained stubborn. So Trump, always willing to kick a can down the road, interrupted Mnuchin to offer a three-month increase, a continuing resolution that will keep the government open through December, and about $8 billion in hurricane money. The Democrats said yes.

That, anyway, is what happened. But the media are not satisfied to report what happened. They want—they need—to tell you what it means. And what does it mean? Well, they aren’t really sure. But it’s something big. It’s something spectacular. For example:

1. “Trump Bypasses Republicans to Strike Deal on Debt Limit and Harvey Aid” was the headline of a story for the New York Times  by Peter Baker, Thomas Kaplan, and Michael D. Shear. “The deal to keep the government open and paying its debts until Dec. 15 represented an extraordinary public turn for the president, who has for much of his term set himself up on the right flank of the Republican Party,” their article began. Fair enough. But look at how they import speculation and opinion into the following sentence: “But it remained unclear whether Mr. Trump’s collaboration with Democrats foreshadowed a more sustained shift in strategy by a president who has presented himself as a master dealmaker or amounted to just a one-time instinctual reaction of a mercurial leader momentarily eager to poke his estranged allies.”

2. “The decision was one of the most fascinating and mysterious moves he’s made with Congress during eight months in office,” reported Jeff Zeleny, Dana Bash, Deirdre Walsh, and Jeremy Diamond for CNN. Thanks for sharing!

4. “For Conservatives, Trump’s Deal with Democrats Is Nightmare Come True,” read the headline for a New York Times article by Jeremy W. Peters and Maggie Haberman. “It is the scenario that President Trump’s most conservative followers considered their worst nightmare, and on Wednesday it seemed to come true: The deal-making political novice, whose ideology and loyalty were always fungible, cut a deal with Democrats.”

5. “Trump sides with Democrats on fiscal issues, throwing Republican plans into chaos,” read the Washington Post headline the day after the deal was announced. “The president’s surprise stance upended sensitive negotiations over the debt ceiling and other crucial policy issues this fall and further imperiled his already tenuous relationships with Senate Majority Leader Mitch McConnell and House Speaker Paul Ryan.”  Yes, the negotiations were upended. Then they made a deal.

6. “Although elected as a Republican last year,” wrote Peter Baker of the Times, “Mr. Trump has shown in the nearly eight months in office that he is, in many ways, the first independent to hold the presidency since the advent of the two-party system around the time of the Civil War.” The title of Baker’s news analysis: “Bound to No Party, Trump Upends 150 Years of Two-Party Rule.” One hundred and fifty years? Why not 200?

The journalistic rule of thumb used to be that an article describing a political, social, or cultural trend requires at least three examples. Not while covering Trump. If Trump does something, anything, you should feel free to inflate its importance beyond all recognition. And stuff your “reporting” with all sorts of dramatic adjectives and frightening nouns: fascinating, mysterious, unexpected, extraordinary, nightmare, chaos, frenzy, and scapegoats. It’s like a Vince Flynn thriller come to life.

The case for the significance of the budget deal would be stronger if there were a consensus about whom it helped. There isn’t one. At first the press assumed Democrats had won. “Republicans left the Oval Office Wednesday stunned,” reported Rachael Bade, Burgess Everett, and Josh Dawsey of Politico. Another trio of Politico reporters wrote, “In the aftermath, Republicans seethed privately and distanced themselves publicly from the deal.” Republicans were “stunned,” reported Kristina Peterson, Siobhan Hughes, and Louise Radnofsky of the Wall Street Journal. “Meet the swamp: Donald Trump punts September agenda to December after meeting with Congress,” read the headline of Charlie Spiering’s Breitbart story.

By the following week, though, these very outlets had decided the GOP was looking pretty good. “Trump’s deal with Democrats bolsters Ryan—for now,” read the Politico headline on September 11. “McConnell: No New Debt Ceiling Vote until ‘Well into 2018,’” reported the Washington Post. “At this point…picking a fight with Republican leaders will only help him,” wrote Gerald Seib in the Wall Street Journal. “Trump has long warned that he would work with Democrats, if necessary, to fulfill his campaign promises. And Wednesday’s deal is a sign that he intends to follow through on that threat,” wrote Breitbart’s Joel Pollak.

The sensationalism, the conflicting interpretations, the visceral language is dizzying. We have so many reporters chasing the same story that each feels compelled to gussy up a quotidian budget negotiation until it resembles the Ribbentrop–Molotov pact, and none feel it necessary to apply to their own reporting the scrutiny and incredulity they apply to Trump. The truth is that no one knows what this agreement portends. Nor is it the job of a reporter to divine the meaning of current events like an augur of Rome. Sometimes a cigar is just a cigar. And a deal is just a deal. 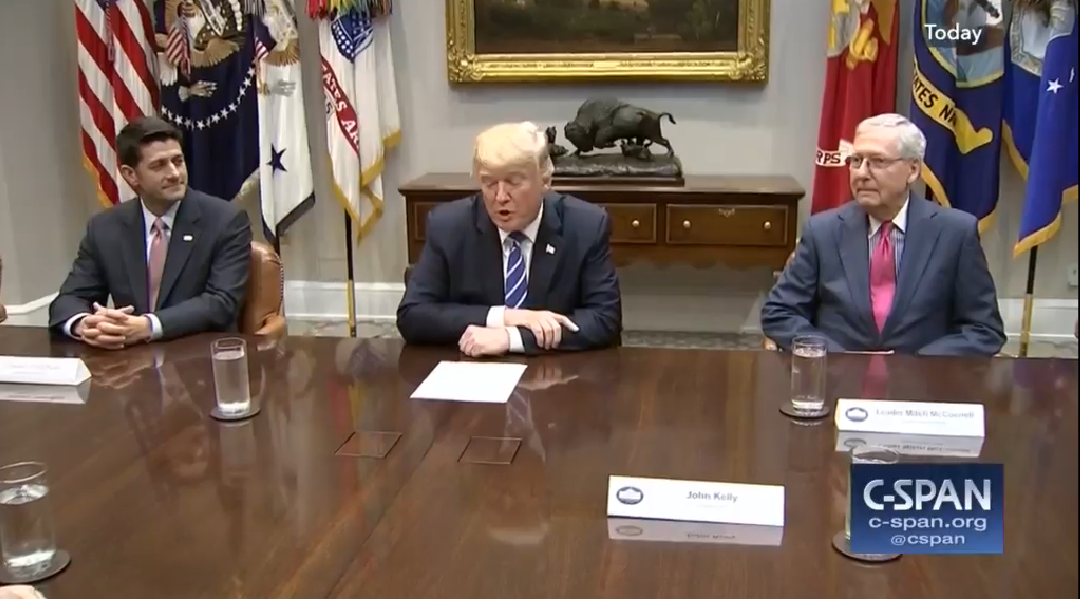