It was the first week of March, and Ilhan Omar was about to face censure by the United States House of Representatives. The freshman Democrat from Minnesota, one of two Muslim women elected to Congress in 2018, had uttered an anti-Semitic slur during an appearance in Washington, D.C., when she accused supporters of Israel of having “allegiance to a foreign country.” Nor was this insinuation of dual loyalty Omar’s first infraction. Her anti-Semitic CV is long.

In 2012, Omar prayed for Allah to “awaken the world.” Why? Because Israel, presumably using its nefarious Jewish mind-control powers, had “hypnotized the world” to mask its “evil doings.” Earlier this year, Omar said that American support for Israel is “all about the Benjamins, baby,” accusing Jews of manipulating American politics through campaign donations.

Omar has an unsettling fixation with Israel and its American supporters. She appears determined to mainstream anti-Semitic tropes in American politics. Faced with a growing division between anti-Israel insurgents such as Omar on one hand, and established pro-Israel Democrats such as Eliot Engel and Debbie Wasserman Schultz on the other, Nancy Pelosi prepared a resolution condemning Omar’s statement. Then something remarkable took place.

Omar refused to apologize. She portrayed herself as the victim of a double standard. Alexandria Ocasio-Cortez and others rallied to her side. Her defenders said unnamed forces—you know who—were attempting to silence Omar for having the temerity to criticize Israeli policy and start a “debate” over the U.S.-Israel alliance. The hashtag #IStandWithIlhan began trending on Twitter. Linda Sarsour, an ally of Louis Farrakhan’s, crowed, “Senators Bernie Sanders, Kamala Harris, and Elizabeth Warren speak up for Rep. Ilhan Omar and against the stifling of honest debate on Israel/Palestine. The tide is shifting. They said a change is gonna come and it’s here.” Lovely.

By the time the House voted on March 7, Omar’s name had been removed from a resolution that condemned not only anti-Semitism but also “anti-Muslim discrimination and bigotry against minorities.” The language was so broad that it became meaningless, an exercise in virtue-signaling gestural politics that exacted no price on Omar for her noxious rhetoric.

Omar had won this fight despite the pathetic excuses made on her behalf. She hadn’t questioned the actions of Israel’s government. She was questioning the loyalty of Israel’s supporters, including Jews. She wasn’t beginning a debate. She was injecting anti-Semitic clichés into a 70-year-old argument. Yet she emerged victorious, with Nancy Pelosi making excuses for her and a gaggle of 2020 candidates protecting her ability to slander Jews. How could this happen?

It’s well established that Democrats have succumbed to the theory of intersectionality, which emphasizes “overlapping identities” such as women of color or black LGBTQ men. The ideology establishes a hierarchy of grievance in which the most oppressed identities are at the top, and the most privileged identities, such as white males, are at the bottom. The one identity not covered by this intricate web of suffering and resentment, as Elliot Kaufman pointed out last year in Commentary (“The Campus Intersectionality Craze,” May 2018), is Jewishness.

Jews have been written out of the progressive left’s mythology of injustice. Once you enter the world of intersectionality, anti-Semitism loses its exceptional character. It is not a millennia-old viral conspiracy theory that ends inexorably in violence. It is just another complaint. Ayanna Pressley, of Massachusetts, another freshman Democrat, said, “We need to have equity in our outrage, and Islamophobia needs to be included in this.” Anti-Semitism, Islamophobia—you say to-may-to, I say to-mah-to. Pressley also said, “I always have & always will stand in opposition to any and all forms of hatred and discrimination—there is no hierarchy of hurt.”

Is that really true? In some quarters of the left, the weight of anti-Semitism is lessened by the very fact of Jewish achievement. James Clyburn, the House majority whip, suggested as much when he defended Omar by saying, “There are people who tell me, ‘Well, my parents are Holocaust survivors.’ ‘My parents did this.’ It’s more personal with her.” Omar “is living through a lot of pain.” She’s the martyr, you see, whose overlapping identities as a Somali female Muslim refugee make her more vulnerable than pro-Israel Jews. Her claims of injustice are more powerful. She wins the gold in the victimhood Olympics.

It is not simply a matter of asserting victim status, however. The decisive factor that moved Ilhan Omar from the margin to close to the center of the Democratic Party is the communications infrastructure that publicizes—and profits from—identity politics. Race talk sells. Intersectionality is the way to online clicks and shares. Whenever Omar makes an anti-Semitic comment, which happens on days ending in y, the same cable and digital media that have spent years bemoaning the “whattaboutism” of Republicans who defend President Trump indulge in some “whattaboutism” of their own. Or back Omar outright.

“This Is What the Beginning of a Real Israel Debate Looks Like,” said the New Republic in February. “Ilhan Omar Has a Point,” reads a Slate headline. “Only one brand of anti-Semitism scares me,” tweeted Paul Krugman, “and it’s not on the left.” The Washington Post featured several articles supporting Omar during this latest controversy. In a particularly bizarre piece, “The Dishonest Smearing of Ilhan Omar,” Paul Waldman asserts, “When Gov. Greg Abbott (R)—also not a Jew—proclaims that ‘Anti-Israel policies are anti-Texas policies,’ he’s expressing dual loyalty.” No he’s not. He’s expressing solidarity with a democratic ally under siege. The inability to tell the difference says a lot more about Waldman than Abbott.

In another piece, “Want to Combat Hate? Stop the Hazing of Ilhan Omar and Start Listening,” Wajahat Ali and Rabia Chaudry write, “We can and should criticize Israel and the occupation of Palestinians without using anti-Semitism, just like we can and should criticize Saudi Arabia’s horrific human rights abuses without being Islamaphobic. Omar is learning that lesson.” Except there’s no evidence that Omar has acquired anything but knowledge of her ability to flout Pelosi.

A Democratic Party alienated from Israel’s government, a Democratic president who blamed opposition to his Iran nuclear deal on “lobbyists” with “money,” a rising generation of far-left activists for whom anti-Semitism is an adjunct to progressive and socialist politics, a balkanizing academic doctrine that has pervaded American culture, and an ideological and partisan media established the ground for Ilhan Omar’s intersectional anti-Semitism. As pro-Israel Jews navigate this perilous territory, they ought to keep an eye on how Omar is treated, coddled, and celebrated by a media more concerned with manifestations of diversity than accountability. Democracy dies in rationalizations for anti-Semitism. 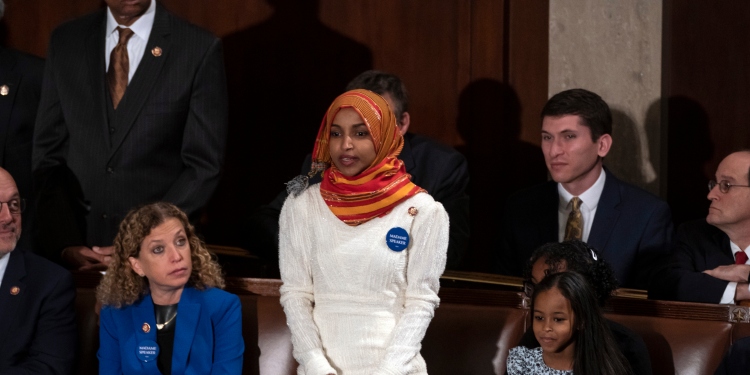