Every evening on Twitter, Tom Jolly, print editor of the New York Times, posts the front page of the next edition. August 5th was no exception. At 6:05 p.m., he tweeted an image of the front page with the lead-all headline, “Trump Urges Unity Vs. Racism.” What happened next revealed a lot about the Times, its readers, and the role of media in contemporary American politics and society. It’s not pretty.

The article, by Michael Crowley and Maggie Haberman, reported on the speech that President Trump delivered from the White House after mass shootings in Dayton, Ohio, and El Paso, Texas. Like most Times coverage of the president, it not so subtly smuggled the journalists’ opinions into newsprint. The first and third paragraphs did quote Trump condemning “racist hate” and warning of “the perils of the internet and social media.” Then the story recounted what he did not say.

Trump “stopped well short of endorsing the kind of broad gun control measures that activists, Democrats, and some Republicans have sought for years, such as tougher background checks for gun buyers and the banning of some weapons and accessories such as high-capacity magazines.” He “offered no recognition of his own use of those platforms to promote his brand of divisive politics.” He “took no responsibility for the atmosphere of division, nor did he recognize his own reluctance to warn of the rise of white nationalism until now.” Indeed, “it seemed unlikely that Mr. Trump’s 10-minute speech, coming after one of the most violent weekends in recent American history, would reposition him as a unifier when many Americans hold him responsible for inflaming racial division.”

The juxtaposition of this highly critical write-up beneath a straightforward, neutral, and, yes, accurate headline was unusual. So unusual, in fact, that Twitter users immediately began to point out the discrepancy. Like many people on Twitter, they did so in a mix of sarcasm and shrieking, hysterical, self-righteous high dudgeon.

Election analyst Nate Silver was among the first to raise an eyebrow. “Not sure ‘TRUMP URGES UNITY VS. RACISM’ is how I would have framed the story,” he tweeted. Pod Save America bro Tommy Vietor quoted Silver and tweeted, “I often find attacks on the NYT to be overheated and misdirected but this is just terrible.” Beto O’Rourke tweeted, “Unbelievable.”

Alexandria Ocasio-Cortez decided to raise the ante by saying that her hometown newspaper, known throughout the world for its liberal politics, is a handmaiden of bigotry: “Let this front page serve as a reminder of how white supremacy is aided by—and often relies upon—the cowardice of mainstream institutions.” And let Ocasio-Cortez’s tweet serve as a reminder of how, in 2019, no one, not Nancy Pelosi or the Gray Lady, is immune to accusations of racism.

By 7:12 p.m.—one hour and seven minutes after the first headline went up on the website—the Times made a change. Jolly posted the new front page, bearing the headline “Assailing Hate but Not Guns.” As prose, this version was more confusing than its predecessor. It lacked a subject, was written in an awkward gerund form, and was as much a critique of Trump as it was a report on what he had said. Then again, the online mob outraged over “Trump Urges Unity vs. Racism” wasn’t interested in The Elements of Style. It wanted validation.

The #CancelNYT hashtag was trending. For many on the left, the initial anodyne headline was the last time they would allow the Times to offend their sensibilities. CNN political contributor Joan Walsh tweeted, “I canceled my subscription. I know a lot of folks will tell me I’m wrong. I will miss it. But I can’t keep rewarding such awful news judgment. ‘Trump Urges Unity Against Racism’ is almost as bad as their full-page Comey letter coverage just before 2016 election. Nobody learns.” As I write, Walsh’s statement has been retweeted some 4,000 times.

Contrary to her prediction, few of the 1,200 people who replied to her Tweet told her she was wrong. One exception was David Cay Johnston, a former Times reporter, who said, “Joan you need to look at the second edition headline which is dramatically better. You know perfectly well that in a rush to deadline bad heds and bad writing sometimes gets published.” Walsh replied, “Sorry, David, it’s not dramatically better. It’s a rush to improvement but actually, it makes no sense. I’ve put this off for almost 3 years. They are blowing their coverage of this crisis. I’m out.”

Dean Baquet, the Times’ top editor, told the Atlantic that it was all just a big misunderstanding. He doesn’t usually know what goes on the front page until later in the evening, though he probably should. The Times has lots of stories going all day, including video! The print newspaper is a “mechanical thing,” in addition to being a “beloved thing.” And while people think the Times changed the headline because of pressure, the truth is that he and his underlings had already been working on fixing the headline for the paper’s second edition by the time the editors even knew social media had gone on the attack.

This effort at damage control proved necessary because, as a spokesman for the Times told TheWrap, the paper had “seen a higher volume of cancellations today than is typical.” The reasons for these cancellations would strike an ordinary person as bizarre. Progressive activist Ryan Knight tweeted “5 reasons to #CancelNYT,” including “in 2016 they ran story after story about Hillary’s emails”; “in 2016 they said there were no links between Russia and Trump’s campaign”; “phony headlines that normalize the white supremacist in the Oval Office”; Maggie Haberman; and Maureen Dowd.

Twitter user Film Crit Deathstroke said, “#CancelNYT and tell them they won’t re-subscribe until Bari Weiss, Bret Stephens, David Brooks, and Ross Douthat are gone.” Another, I.F. Thunder, tweeted, “The New York Times hasn’t been liberal since it helped Bush and Cheney sell their Iraq War. It only appears liberal to right-wing authoritarians.”

Many of the loudest complaints came from supporters of Bernie Sanders and Elizabeth Warren. The far left has long been critical of the Times, but the outrage over the “Trump Urges Unity” headline encompassed more moderate Democrats as well. The ubiquity of the uproar suggests that the center of the Democratic Party really has moved to the left, and increasingly so during the Trump presidency or, as Walsh might say, the Trump “crisis.”

The president’s most committed opponents are no longer interested in information about him. They don’t think it’s possible to be objective about a “white supremacist” president who has built “concentration camps” on the southern border and who, in the words of one MSNBC anchor, “is talking about exterminating Latinos.” These slanders are now tossed off on a daily basis. If you accept them as true, then Trump must be removed from office sooner rather than later. Anything that complicates this effort—including a five-word newspaper headline—should be opposed.

The Times has grown its circulation during Trump’s presidency by trying to appeal to the Resistance. But it still retains some of the habits of a newspaper committed to presenting readers with accurate news and reporting and lively analysis and commentary. That is why the editors used the initial headline. It was fit to print. But a large portion of the Times readership do not read the paper to be informed. They read it for confirmation of their worldview. That the Times so quickly buckled to pressure after the left’s nervous breakdown is a reminder that, while America will survive Donald Trump, American journalism might not. 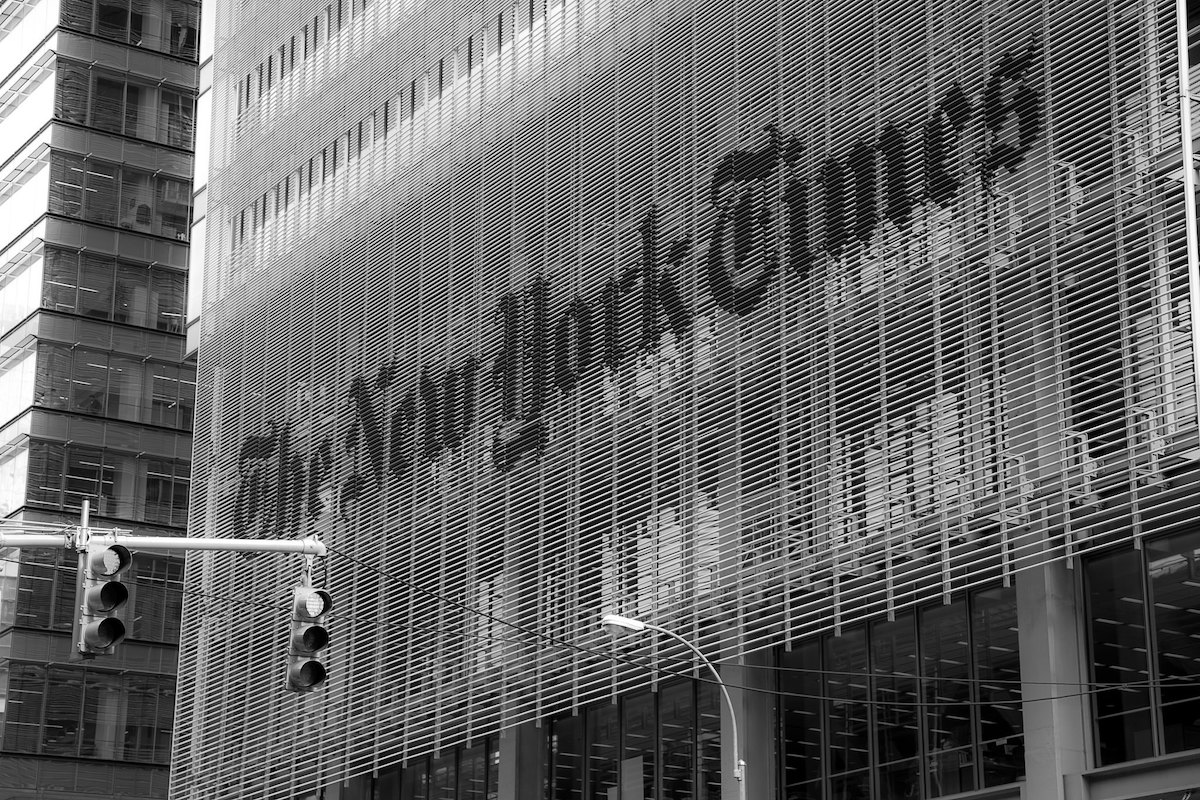