ver summer vacation, the New York Times ran an essay by U.S.-based Israeli writer Ruth Margalit. Headlined “How Benjamin Netanyahu Is Crushing Israel’s Free Press,” the article accused Netanyahu of attempting “to control the country’s pages and airwaves” while engaging in “a broader attack” on “Israel’s democratic institutions.” Netanyahu, we are led to believe, exercises a Svengali-like hold over the Israeli media, intimidating reporters and editors and broadcasters and shaping the news to further his agenda and ambitions. So terrifying has the situation become, it would seem, that Israeli journalists must turn to the most influential newspaper in the world to have their voices heard.

Finished laughing? For anyone even remotely familiar with the Israeli media landscape, Margalit’s charges are absurd. But they are also deeply revealing—of a bankrupt Israeli left that is powerless, isolated, unpopular, unlamented, and vengeful. Defeated at the polls, the left in Israel mobilizes external pressure—the diaspora, J Street, President Obama, the U.N., nongovernmental organizations, foreign press—to compel the Israeli government to enact the very policies the Israeli public rejects. It is a strategy of delegitimization, of convincing world opinion, such as it is, that Israel is neither liberal nor democratic and therefore undeserving of moral sanction, foreign aid, and other forms of diplomatic support.

But the arguments on which this strategy is based are incoherent. Margalit, for example, begins by citing a recent Freedom House study in which the nonprofit declared that Israel’s press was no longer “free” but only “partly” so. The change, Freedom House said, was “due to the growing impact of Israel Hayom, whose owner-subsidized business model endangered the stability of other outlets,” as well as “the unchecked expansion of paid content—some of it government funded—whose nature was not clearly identified to the public.”

Contemplate that for a moment. Notice that government action—the typical means of oppression—is nowhere mentioned. Freedom House is saying instead that the proliferation of media suppresses freedom, that “owner-subsidized” periodicals are illiberal, that paid content or native advertising is contrary to the spirit of democracy.

By these criteria, the United States also should be reclassified as “partly free.” After all, this country’s media are far more competitive than tiny Israel’s. Donors and investors subsidize many publications, including the one you are reading now. And paid content is all over the Internet. But Freedom House is unlikely to extend its warped criteria to other nations, because only in Israel is diversity of views taken to be a bad thing. Even the PBS Newshour has credited Israel Hayom for breaking the “monopoly on Israeli readership” held “for decades” by the “liberal daily Yedioth Ahronot.” Yet that is precisely what bothers an organization “dedicated to the expansion of freedom and democracy around the world.”

The Israeli left cannot accept that their country is far less isolated, far more stable, far more liberal, and far more democratic than it has been in decades.


What the left despises about the new Israeli media is not its form but its content. Israel Hayom leans right, supports Netanyahu, is unapologetically Zionist and patriotic, and is tied to casino magnate Sheldon Adelson. It is also incredibly popular. In July, polls revealed that Israel Hayom had grown to a 40 percent share of the market. Left-wing Haaretz had fallen to 4 percent—its lowest readership ever. That Israel Hayom, which is distributed free of charge, has been a disruptive force in Israeli media goes without saying. It has enemies. A few years ago, the Israeli left supported a bill in the Knesset that objectively would have shut down Israel Hayom. Who stood up for freedom of the press then? Who said a law restricting expression “shames the Knesset”? Bibi Netanyahu.

Indeed, Margalit’s article is a testament to how crowded and boisterous and adversarial the Israeli press is. In the course of arguing that Netanyahu is “crushing” freedom, she mentions Israel Hayom, Haaretz, Yediot Ahronot, and the Web portal Walla! She quotes anti-Netanyahu columnist Nahum Barnea; anti-Netanyahu television journalist Ilana Dayan; and another television journalist, Netanyahu critic Amit Segal; and right-wing minister Naftali Bennett, who tells her Israel Hayom is like Pravda. None of them sound crushed to me.

Almost as if to confirm freedom of discussion in Israel, Margalit’s New York Times attack on Netanyahu was widely circulated online and in social media. Chemi Shalev, a Haaretz writer, tweeted a link to Margalit’s piece. As I write, his account has not been suspended, nor has he been imprisoned. On August 1, Shalev’s paper ran an op-ed by two “American Jewish Historians” who explained “Why We’ve Left Zionism Behind.” One of the co-authors described “the sense of repulsion” she feels “when I enter a synagogue in front of which the congregation has planted a sign reading, ‘We Stand with Israel.’” Never acknowledged is the fact that Israel remains the sole nation in the Middle East where she is free to express such a dissenting (and disgusting) opinion.

The narrative of persecution offered by Margalit serves two functions. It explains the left’s continued failure in elections by ascribing losses to a vast right-wing conspiracy to control Israeli media and politics. And it turns meager journalists, whose views are not shared by the public, into heroes fighting a righteous battle for morality and justice.

What appears at first glance as a broadside against corruption is in fact a giant excuse for self-flattery and self-congratulation. “The only heartening thing in all this,” Margalit writes, “is that news outlets are pushing back to maintain their independence.” So the journalists “pushing back” to “maintain their independence” are not quite as defenseless and enfeebled as we had been told. Margalit then quotes Ilana Dayan, who tells her: “Despite the assault on the press, the Israeli media remains very critical, very aggressive, and has a lot of chutzpah. It’s a kind of basic instinct that’s part of our DNA.” You go girl!

The Israeli left cannot accept that their country is far less isolated, far more stable, far more liberal, and far more democratic than it has been in decades. Israel is not only secure. It has also withstood efforts to isolate it internationally even as its economy grows and diversifies, its population increases, its culture matures, its society variegates. Israeli media have long been the left’s redoubt, but here, too, the walls are crumbling, they are losing their grip, and they can’t stand it. Margalit quotes a journalist who says, “Sometimes competition is the refuge of the antidemocrat.” How incredibly wrong that is. The last refuge of the antidemocrat isn’t competition. It’s the New York Times. 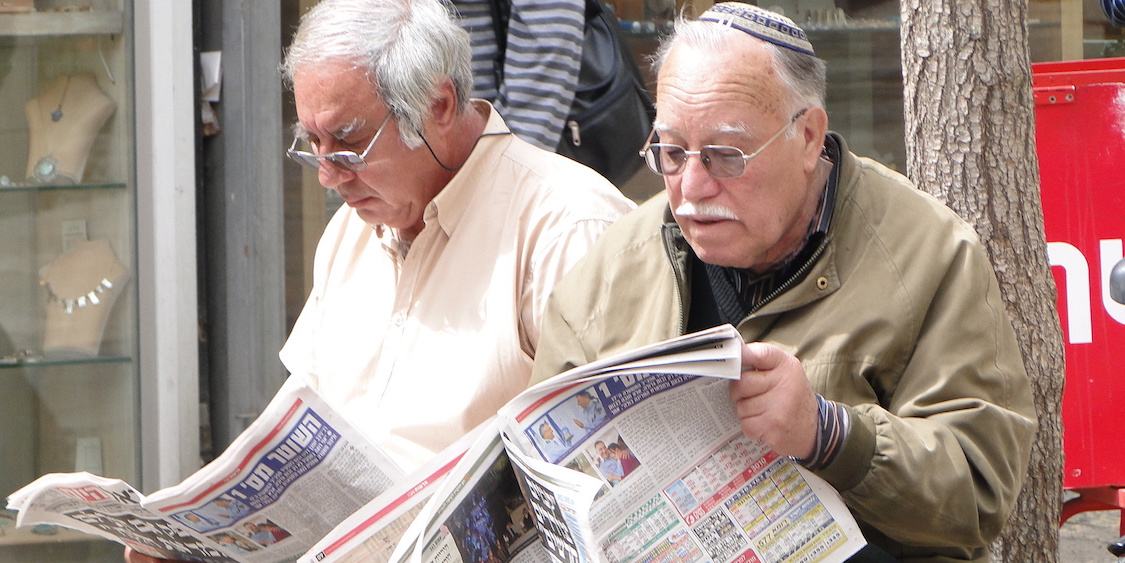