omini Sengupta, who covers the United Nations for the New York Times, recently tweeted about the new U.S. ambassador there. “I find Nikki Haley unusual among diplomats here,” she wrote, “in that she speaks often without notes, she’s confident about what she needs to say.” Imagine: a prepared, competent, and spirited representative of U.S. interests at the world body. How novel.

Sengupta appears puzzled by her subject. For not only is Ambassador Haley self-assured and capable of extemporaneous speech, she is unlike her immediate predecessors in that she is a conservative willing to defend her country’s ideals and interests before others. Moreover, Haley does not reflexively criticize the government and people of our ally Israel. So trapped within the liberal bubble is the Times that such behavior comes across to the paper as aberrant, freakish, worthy of incredulity. The coverage that results is almost funny when it is not outright embarrassing.

Example: On March 31, Sengupta wrote a piece with the alarmist headline “UN Envoy Draws From Playbook of an Aide Steeped in Conservative Ideology.” The article is a profile of Haley’s chief of staff Steven Groves. Why is he newsworthy? Because he “has described himself as a champion of American sovereignty and has written forcefully against international agreements” and a few of his ideas “have infused the ambassador’s remarks so far.” Shocking, I know.

Years ago, when he worked for the Senate Permanent Subcommittee on Investigations, Groves investigated the Oil-for-Food scandal in which UN officials covered up Iraqi abuse of an international program that allowed Saddam Hussein to sell oil for humanitarian relief. But this detail of Groves’s résumé interests Sengupta far less than his work for the Heritage Foundation, whose “analysts have advocated mission-by-mission scrutiny of peacekeeping operations” and who “argue that the United States should pay no more than 25 percent of the budget.” Ambassador Haley—this might surprise you—supports both policies. And “other Heritage Foundation priorities have already found their way into the ambassador’s own.” Conspiracy? Sengupta is just asking questions.

The article is thin as profiles go: a LinkedIn page, some policy briefs, quotes from a friend. Neither Groves nor Haley commented for the piece. There is no color. The reader does not come away from the piece with a sense of what Groves is like, how he interacts with his staff or with other ambassadors, how he and Haley relate. What the reader comes away with is a feeling of wonderment that the piece was written at all. A more apt but less eye-catching headline might have been, “Haley Hires Aide Who Shares Her Views.” The gist is that conservatives exist. This is news to the New York Times.

More insidious, because it betrayed the canons of objective journalism, was Sengupta’s report on a speech Haley delivered to the Council on Foreign Relations on March 29: “Nikki Haley Calls United Nations Human Rights Council ‘So Corrupt.’” Note how the paper distances itself from Haley’s claim and implies that it is egregious or false by using quotations in the headline. The scare quotes also appear in the lead: “The American envoy to the United Nations, Nikki R. Haley, described the United States on Wednesday as the ‘moral conscience’ of the world, and she dismissed the United Nations Human Rights Council as ‘so corrupt’ without offering evidence.”

The detached style of the copy fails to conceal the spirit of adversarial condescension in which it is written. This article is not labeled opinion or analysis or fact check. It purports to be a dispassionate retelling of Haley’s speech. It therefore misleads the reader by juxtaposing Haley’s statements with Sengupta’s barely disguised commentary. In the following excerpts the emphasis is my own:

The measure of Sengupta’s disingenuousness and bad faith can be taken by examining the above sentences.

The first is a needless potshot at a controversial administration policy. It makes no attempt to inform the reader of the grounds of Haley’s defense but merely recycles opposition talking points.

You might finish the second sentence wondering why Haley did not mention the reports of famine in Africa and Yemen. The reason, as Sengupta writes later on, is that “she was not asked” about it. Oh.

Sengupta’s implication in the third example is that the UN Security Council’s obsession with Israel is no big deal because it also discusses Yemen and Syria. But those countries are active war zones, sites of terrorism and foreign intervention and humanitarian crises. Is the New York Times seriously likening the situation in Israel to what’s happening in Yemen and Syria? To do so would be to commit the same gross moral equivalence of which the UN stands condemned.

Moral equivalence between Israel and its adversaries might as well be part of the Times style guide, I suppose. What’s remarkable about Sengupta’s piece is that even as she clumsily attempts to provide left-wing “context” to Haley’s appearance at the Council on Foreign Relations, she can’t bring herself to mention that the charge of corruption against the UN Human Rights Council is a long-standing bipartisan element of U.S. foreign policy.

Saint Hillary Clinton herself, when she announced that America was rejoining the council in 2009, said her goal was “improving the UN human-rights system,” and in a subsequent speech she chided its anti-Israel bias. “It cannot continue to single out and devote disproportionate attention to any one country,” Clinton said.

Haley’s charge is obviously true. The council exists only because its ancestor, the UN Human Rights Commission, had become so monopolized by autocrats, dictators, anti-Semites, anti-Americans, and chronic human-rights violators that it was dissolved upon American withdrawal in 2006. Its replacement is little better, since any human-rights body whose members do not recognize rights within their own borders is not worthy of the name. Last November, the nonprofit UN Watch reported that the autocratic socialist government of Venezuela used hundreds of fraudulent groups to whitewash its record before the council. What’s the word for that? Right: corruption.

Nikki Haley has the clarity of vision and political gumption to call corruption by its name. No wonder the Times finds her so unusual. 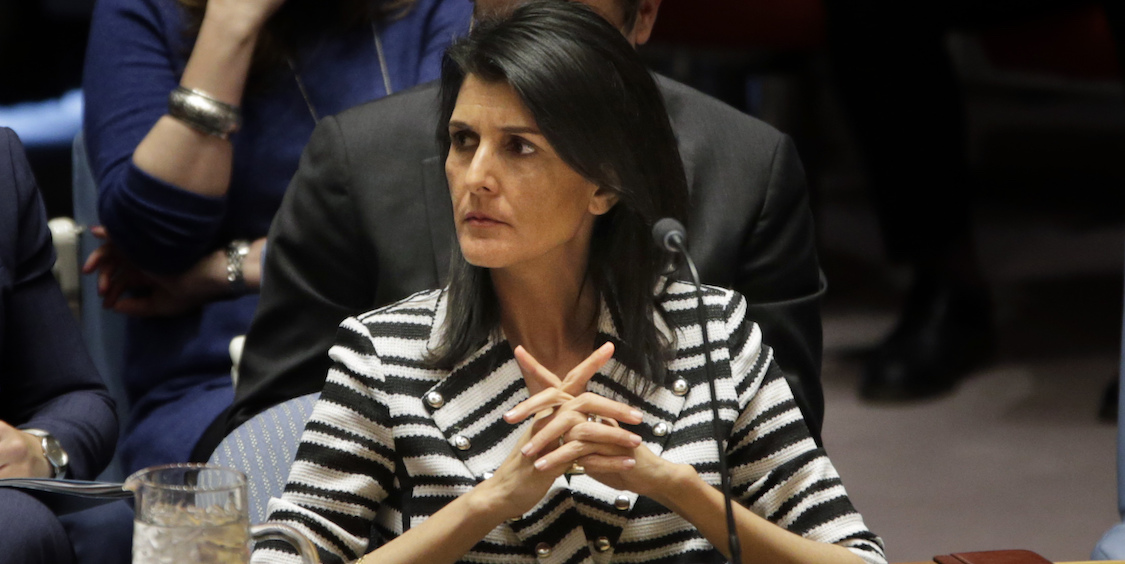