n January 5, 2013, Nicholas Kristof wrote a column in the New York Times about China’s next leader. Kristof has deep connections to the People’s Republic. He covered China for the Times during the Tiananmen Square uprising. He and his wife and sometimes co-author, Sheryl WuDunn, return to the country often. Kristof seemed to be in a position to know what was going on in this tremendously important nation of more than 1 billion people.

Then again, you know what happens when you assume.

“Here is my prediction,” Kristof wrote. “The new paramount leader, Xi Jinping, will spearhead a resurgence of economic reform, and probably some political easing as well. Mao’s body will be hauled out of Tiananmen Square on his watch, and Liu Xiaobo, the Nobel Peace Prize–winning writer, will be released from prison.”

True, Kristof conceded, “I may be wrong entirely.” But, he went on, “my hunch on this return to China, my old home, is that change is coming.”

Five years later, the Chinese economy, while large, is saddled with debt. Analysts and government officials are worried about its real-estate bubble. Despite harsh controls, capital continues to flee China. Nor has there been “some political easing.” On the contrary, repression has worsened. The Great Firewall blocks freedom of speech and inquiry, human-rights advocates are jailed, and the provinces resemble surveillance states out of a Philip K. Dick novel. Mao rests comfortably in his mausoleum. Not only did Liu Xiaobo remain a prisoner, he was also denied medical treatment when he contracted cancer, and he died in captivity in 2017.

As for Xi Jinping, he turned out not to be a reformer but a dictator. Steadily, under the guise of anti-corruption campaigns, Xi decimated alternative centers of power within the Communist Party. He built up a cult of personality around “Xi Jinping thought” and his “Chinese dream” of economic, cultural, and military strength. His preeminence was highlighted in October 2017 when the Politburo declined to name his successor. Then, in March of this year, the Chinese abolished the term limits that have guaranteed rotation in office since the death of Mao. Xi reigns supreme.

Bizarrely, this latest development seems to have come as a surprise to the American press. The headline of Emily Rauhala’s Washington Post article read: “China proposes removal of two-term limit, potentially paving way for President Xi Jinping to stay on.” Potentially? Xi’s accession to emperor-like status, wrote Julie Bogen of Vox, “could destabilize decades of progress toward democracy and instead move China even further toward authoritarianism.” Could? Bogen did not specify which “decades of progress toward democracy” she was talking about, but that is probably because, since 1989, there haven’t been any.

Xi’s assumption of dictatorial powers should not have shocked anyone who has paid the slightest bit of attention to recent Chinese history. The Chinese government, until last month a collective dictatorship, has exercised despotic control over its people since the very founding of the state in 1949. And yet the insatiable desire among media to incorporate news events into a preestablished storyline led reporters to cover the party announcement as a sudden reversal. Why? Because only then would the latest decision of an increasingly embattled and belligerent Chinese leadership fit into the prefabricated narrative that says we are living in an authoritarian moment.

For example, one article in the February 26, 2018, New York Times was headlined, “With Xi’s Power Grab, China Joins New Era of Strongmen.” CNN’s James Griffiths wrote, “While Chinese politics is not remotely democratic in the traditional sense, there are certain checks and balances within the Party system itself, with reformers and conservatives seeing their power and influence waxing and waning over time.” Checks and balances, reformers and conservatives—why, they are just like us, only within the context of a one-party state that ruthlessly brooks no dissent.

Now, we do happen to live in an era when democracy and autocracy are at odds. But China is not joining the “authoritarian trend.” It helped create and promote the trend. Next year, China’s “era of strongmen” will enter its seventh decade. The fundamental nature of the Communist regime in Beijing has not changed during this time.

My suspicion is that journalists were taken aback by Xi’s revelation of his true nature because they, like most Western elites, have bought into the myth of China’s “peaceful rise.” For decades, Americans have been told that China’s economic development and participation in international organizations and markets would lead inevitably to its political liberalization. What James Mann calls “the China fantasy” manifested itself in the leadership of both major political parties and in the pronouncements of the chattering class across the ideological spectrum.

Indeed, not only was the soothing scenario of China as a “responsible stakeholder” on the glide path to democracy widespread, but media figures also admonished Americans for not living up to Chinese standards. “One-party autocracy certainly has its drawbacks,” Tom Friedman conceded in an infamous 2009 column. “But when it is led by a reasonably enlightened group of people, as China is today, it can also have great advantages.” For instance, Friedman went on, “it is not an accident that China is committed to overtaking us in electric cars, solar power, energy efficiency, batteries, nuclear power, and wind power.” The following year, during an episode of Meet the Press, Friedman admitted, “I have fantasized—don’t get me wrong—but what if we could just be China for a day?” Just think of all the electric cars the government could force us to buy.

This attitude toward Chinese Communism as a public-policy exemplar became still more pronounced after Donald Trump was elected president on an “America First” agenda. China’s theft of intellectual property, industrial espionage, harassment and exploitation of Western companies, currency manipulation, mercantilist subsidies and tariffs, chronic pollution, military buildup, and interference in democratic politics and university life did not prevent it from proclaiming itself the defender of globalization and environmentalism.

When Xi visited the Davos World Economic Forum last year, the Economist noted the “fawning reception” that greeted him. The speech he delivered, pledging to uphold the international order that had facilitated his nation’s rise as well as his own, received excellent reviews. On January 15, 2017, Fareed Zakaria said, “In an America-first world, China is filling the vacuum.” A few days later, Charlie Rose told his CBS audience, “It’s almost like China is saying, ‘we are the champions of globalization, not the United States.’” And on January 30, 2017, the New York Times quoted a “Berlin-based private equity fund manager,” who said, “We heard a Chinese president becoming leader of the free world.”

The chorus of praise for China grew louder last spring when Trump announced American withdrawal from an international climate accord. In April 2017, Rick Stengel said on cable television that China is becoming “the global leader on the environment.” On June 8, a CBS reporter said that Xi is “now viewed as the world’s leader on climate change.” On June 19, 2017, on Bloomberg news, Dana Hull said, “China is the leader on climate change, especially when it comes to autos.” Also that month, one NBC anchor asked Senator Mike Lee of Utah, “Are you concerned at all that China may be seen as sort of the global leader when it comes to bringing countries together, more so than the United States?”

Last I checked, Xi Jinping’s China has not excelled at “bringing countries together,” unless—like Australia, Japan, South Korea, and Vietnam—those countries are allying with the United States to balance against China. What instead should concern Senator Lee, and all of us, is an American media filled with people suckered by foreign propaganda that happens to coincide with their political preferences, and who are unable to make elementary distinctions between tyrannical governments and consensual ones. 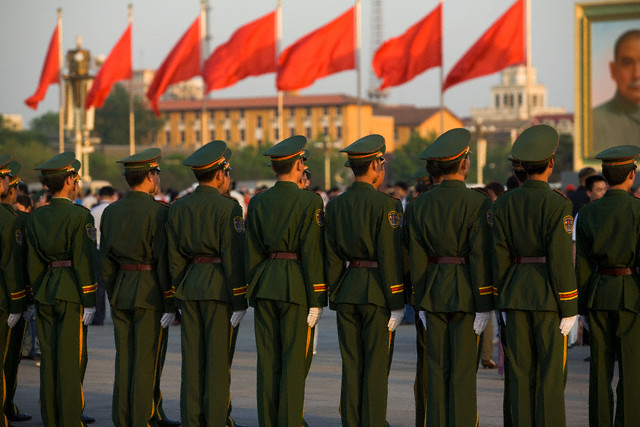 The Three Ways We Get China and Its Neighbors Wrong