o American general has been as deified and demonized as Douglas MacArthur, who died in 1964. He has been hailed as a military genius who was more responsible than any other man for winning the Pacific campaign in World War II. His landing at Inchon during the Korean War has been called one of the most brilliant and daring gambits in military history. His management of the occupation of Japan has been described as one of the most successful nation-building exercises in history. 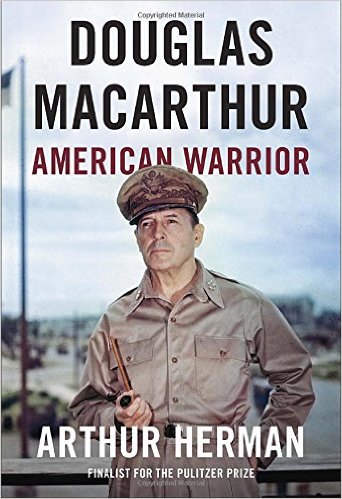 At the same time he has been denounced as an egomaniacal mountebank who never got his just desserts for allowing the planes under his command to be destroyed on the ground in the Philippines shortly after the attack on Pearl Harbor and for being caught by surprise by China’s massive intervention in the Korean War. He has been pilloried as a would-be strongman—a “man on horseback” who led a cavalry charge against hapless Bonus Army protesters in Washington in 1932 and who defied the orders of Harry Truman by plotting war against “Red” China in 1951.

Admirers and detractors can’t even agree on whether MacArthur was a man without fear who routinely exposed himself to enemy fire or a closet coward who earned the nickname “Dugout Doug” for failing to visit his embattled troops on the Bataan Peninsula in 1942.

What no one can deny is that MacArthur was a larger-than-life figure whose image—the crushed cap, the corncob pipe, the aviator sunglasses, the leather flying jacket—became iconic.

There have been many previous biographies, but so compelling is his story that there is always room for one more. With Douglas MacArthur: American Warrior, the prolific and talented historian Arthur Herman has delivered an expertly rendered, compulsively readable account that does full justice to MacArthur’s monumental achievements without slighting his equally monumental flaws.1 More so than most recent historians, Herman comes down on the pro-MacArthur side of the debate. His arguments do not always convince, but they are always thought-provoking, and he takes care to present both sides of the debate in order to allow readers to draw their own conclusions.

Herman stresses the extent to which MacArthur was influenced by his father, General Arthur MacArthur, a Civil War hero who decades later commanded American troops in the Philippines. (The two MacArthurs would be the first father-and-son recipients of the Medal of Honor.) In 1883, the elder MacArthur produced a prophetic memorandum: “The Orient” is “the field of our future labors,” he wrote. “There we must contend for commercial power, and perhaps combat for political supremacy.” Douglas would take that as his personal credo—he would spend much of his career in Asia, beginning as a young second lieutenant, newly graduated first in his class from West Point, who arrived in the Philippines in 1903.

Yet it was in France that Douglas MacArthur first won the military glory that he so coveted. As chief of staff, brigade commander and ultimately division commander of the Rainbow Division in World War I, MacArthur exhibited reckless disregard for danger. He did not bother to wear a helmet or carry a gas mask in combat. And he did not flinch when a shell exploded nearby, showering him with dirt. A colonel standing next to him wrote to his wife that MacArthur was “the bravest man I ever met.” The letter writer’s name? George S. Patton.

After the Great War, MacArthur rose to become the youngest major general in the army. He served as a modernizing superintendent at West Point and then became Army chief of staff in 1930. He lobbied to preserve the Army budget during the dark days of isolationism and the Great Depression.

His tenure was marred primarily by his role in routing the Bonus Army—World War I veterans who assembled in Washington to demand promised benefits ahead of schedule. Herman argues that the violence that occurred, along with the burning of the Bonus Army’s shantytown, was the fault either of the protesters themselves or of the Washington police, not of MacArthur’s soldiers. But the damage was done; MacArthur, who had chosen to accompany his troops in full-dress uniform, earned a reputation as a foe of the workers, if not of democracy itself.

In 1935, MacArthur stepped down as chief of staff to become a field marshal in the Philippines, responsible for organizing that country’s defense. (His aide, Major Dwight Eisenhower, thought he was ridiculous for accepting the puffed-up title and the gaudy uniform that went with it.) Judging by how quickly Japanese troops conquered the archipelago in 1942, his efforts were a failure. Herman attributes the destruction of MacArthur’s aircraft on the ground to “a combination of bad luck and a broken communications systems,” but it was MacArthur who, as commander, bore ultimate responsibility. Even if MacArthur’s air force had been intact, however, he still couldn’t have defeated the Japanese forces given the lack of resources devoted to Philippine and American defenses during the previous 20 years.

Herman is more convincing in suggesting that MacArthur’s failure to visit his besieged men on Bataan more than once was not due to any lack of courage; on the nearby Corregidor island, he routinely risked enemy air raids in the open. The reason for his reluctance, Herman believes, is that “he could not look them in the eye,” knowing that “Washington had written them off.”

Herman does not defend MacArthur from the charge of insubordination, but does offer a spirited defense of MacArthur’s argument, made before a Joint Session of Congress, that ‘in war there can be no substitute for victory.’


While his men were destined for the Bataan Death March, one of the great military war crimes in history, MacArthur and his family—his wife Jean and young son Arthur accompanied him everywhere—were evacuated on Franklin Roosevelt’s orders to Australia. MacArthur took command of the Southwest Pacific theater, then masterminded an island-hopping campaign that culminated in 1945 with the liberation of the Philippines. Thus he made good on his famous pledge, “I shall return.”

After the cessation of hostilities, MacArthur proved to be a magnanimous and far-sighted occupier in Japan. Although he had almost no contact with ordinary Japanese, he successfully led the transformation of their society from a militaristic dictatorship into a pacifistic democracy. Ironically, MacArthur, an arch-conservative at home, proved to be a sort of New Dealer abroad.

Called back to the battlefield at age 70, MacArthur masterminded the landing at Inchon in September 1950 that prevented Kim Il-Sung’s troops from conquering the entire Korean peninsula. Herman argues that it was not MacArthur’s fault that the subsequent invasion of the North led to a massive Chinese intervention. His orders to march to Pyongyang had been approved by President Truman, and his confidence that the Chinese would not or could not stop him had been shared by the entire military and intelligence establishment. The whole world was shocked when MacArthur’s forces were sent reeling back by the Chinese onslaught. Under the new Eighth Army commander, General Matthew Ridgway, the United Nations troops stabilized the front south of Seoul and slowly marched back to regain the South Korean capital.

The question was what to do next. MacArthur favored waging all-out war against China. He wanted to drop 20 to 30 atomic bombs on Manchuria, lay a “radioactive belt of nuclear-contaminated material” to sever North Korea from China, and use Chinese Nationalist and American forces to annihilate the million or so Communist Chinese troops in North Korea.

President Truman would have none of it. He sided with General Omar Bradley, who said this would be “the wrong war at the wrong place at the wrong time with the wrong enemy.” MacArthur made little attempt to hide his disagreement in press interviews and in a letter that was publicized by a Republican congressman.

This proved to be too much for Truman. He set off a furor by firing MacArthur on April 10, 1951. Herman does not defend MacArthur from the charge of insubordination, but does offer a spirited defense of MacArthur’s argument, made before a Joint Session of Congress, that “in war there can be no substitute for victory.” Herman suggests that MacArthur, with his desire to win at all costs, offered a welcome alternative to the indecisive conflicts that America would wage in Vietnam, Iraq, and Afghanistan.

Herman is right that MacArthur might have prevailed, albeit at high and possibly unacceptable cost, in Korea. There is a difference, however, between the kinds of conventional conflicts MacArthur fought and the kinds of guerrilla wars the United States subsequently encountered in Vietnam, Iraq, and Afghanistan. Wars among the people can seldom be won decisively and quickly, no matter how much force is applied.

But that is a small and ultimately inconsequential quibble with a rip-roaring biography that, even if it doesn’t break much new ground, presents an exciting account of a grand old soldier who, contrary to his mock-modest protestations, never seems to “fade away.”


1 Herman, also a Commentary contributor, has an article in this issue, “The Pentagon’s ‘Smart’ Revolution,” that begins on page 25.

How the Second World War Made America Literate

As I Lay Dying