Forty years ago this month, a small movie was released in England by the name of Chariots of Fire. One year later, it won the Oscar for Best Picture, defeating the out-and-out favorite, Warren Beatty’s Reds. Both were about real people; Reds tells the story of leftist journalist John Reed while Chariots is a portrait of two British runners who competed in the 1924 Olympics. Strikingly, the Academy ultimately honored a film that celebrates Christian faith and religious liberty rather than Beatty’s multi-hour tribute to a famous American Communist.

The two runners we see in Chariots are a Jew named Harold Abrahams and a devout Christian named Eric Liddell. Abrahams is a Cambridge student angered by the subtle anti-Semitism he experiences; he determines that he will “take them on, one by one, and run them off their feet.” Liddell, in contrast, competes in adherence to the advice of his missionary father: “Run in God’s name, and let the world stand back and wonder.” The two are set against each other in the hundred-yard dash to determine who will be “the fastest man on earth,” but the qualifying heat is on a Sunday, the Christian Sabbath, and Liddell refuses to run.

I have long been obsessed with the film; I have read what I can about its historical background, corresponded with its producer, and attended a staged 2012 version in the London theater. The recent death of Ben Cross, who played Abrahams, inspired me to return to it again. And the more I watch it, the more I have come to understand the terrible Jewish irony that lies at its heart.

In the film, Abrahams’s response to anti-Semitism is not Jewish pride but assimilation. We see him ebulliently belting out lyrics from the ultimate British musical, HMS Pinafore: “In spite of all temptations / to belong to other nations / he remains an Englishman.” When he is confronted at Cambridge by anti-Semitic dons who accuse him of interest only in his own glory, Abrahams indignantly insists: “I am a Cambridge man first and last, I am an Englishman first and last; what I have achieved, and what I intend to achieve is for my family, for my university, and for my country.”

All this accords with the real life of Harold Abrahams. In an interesting doctoral dissertation on “Jews and British Sport,” David Gareth Dee notes that “Abrahams claimed the most important factor in Jewish sporting success was a willingness to ‘Anglicise’ and to move away from one’s religion.” In the 1920s, the precise moment in which the film is set, Abrahams wrote an article in an Anglo-Jewish publication encouraging English Jews to ignore Jewish Sabbath restrictions in order to compete.

“One must make it clear,” Abrahams wrote, “that a strict adherence to Judaism would prevent one from participating in Saturday competitions and, as a result, the ‘strict’ Jews could never hope to attain international recognition, since at a conservative estimate ninety per cent of important competitions are held on a Saturday afternoon. A religion (qua such) that is one’s philosophy of life (or theistic views) has little if anything to do with the qualities which characterize an athlete.”

For Liddell, faith had everything to do with his qualities as an athlete. “I believe God made me for a purpose,” he informs his sister in one of the central moments in the movie. “But he also made me fast; and when I run, I feel his pleasure.” After a committee of English aristocrats seeks unsuccessfully to pressure Liddell to run on Sunday, one of them reflects that Liddell “is a true man of principle, and a true athlete. His speed is a mere extension of his life, its force. We sought to sever his running from his self.”

By the early 1930s, Abrahams had converted; his funeral in a Church begins and ends the film, as the choir sings William Blake’s aspiration to build Jerusalem “in England’s green and pleasant land.” According to a recent biography by Mark Ryan, “Harold Abrahams was neither a committed Christian nor Jew,” and if he believed anything, it was “that he didn’t want religion to restrict him in life.” Though Abrahams ultimately took two Jewish refugee children during the war, he is remembered today as one of the most prominent British voices against a boycott of the 1936 Berlin Olympics. Despite pleas in the Anglo-Jewry,  Abrahams, whose concern was whether it was “ultimately in the best interest of world sport” to withdraw, served as a British broadcaster at Hitler’s games.

A rabbi watching the tale of Liddell and Abrahams cannot help but wish for the latter to be more like the former. Liddell’s example teaches us a great deal about faith. Speaking to an assembled crowd after a victory, he utilizes running as a metaphor for belief: “I want to compare faith to running in a race….Where does the power come from, to see the race to its end? From within.” On the Sunday in which he was meant to compete, Liddell instead sermonizes from Isaiah: “But they that wait upon the Lord shall renew their strength, they shall mount up with wings, as eagles. They shall run and not be weary, they shall walk and not faint.” I wrote to the film’s producer, David Putnam, and asked how the scriptural passage was chosen. He responded that it was also one of his favorites, and that the passage was chosen by the late Ian Charleson, who had read the entire Bible in preparation for taking on the role of Eric Liddell.

Those verses in Isaiah comprise the haftara, the prophetic passage, read in synagogue as an accompaniment to the Pentateuchal portion known as Lech Lecha, or “go forth.” God orders Abraham to leave for Canaan; it is the beginning of Israel’s story. For Jews, Isaiah’s words reference the Jewish journey of generations and speak to finding the courage to continue what Abraham started. Isaiah is indeed comparing faith to running a race; the passage reminds Jews that history is a marathon, not a dash, and we Jews ought to ponder the source of our ancestors’ endurance.

Here, then, is a terrible irony. Chariots of Fire unintentionally creates a contrast between our forefather Abraham and Harold Abrahams; it is a tale not only of one Jewish runner but of Jews throughout our age who ran away from who they were. In the end, the story of this British Jew is a perfect and painful portrait of a comment by a British chief rabbi, Jonathan Sacks: “Nothing could be more striking than the fact that a people whose very reason for being in the past was to be different, chosen, particular, should today define itself in purely universalist terms, forgetting—surely not accidentally—that it is precisely in our particularity that we enter and express the universal human condition.”

Last year, I took Yeshiva University students to Cambridge. We had come to look at the treasures of the Cairo Geniza, to see the handwriting of Maimonides and Judah Halevi, to see the intellectual achievements of a thousand years of Judaism. Yet I could not help but stop at the Great Court of Trinity College, where, in the film, Abrahams successfully completes the “college dash,” running around the square in 12 seconds. When he wins, one of the watching dons, played by the marvelous John Gielgud, sardonically sneers: “Perhaps they really are God’s chosen people after all.” Indeed we are; but Jews watching the film today must draw spiritual inspiration from the Christian Liddell rather than Harold Abrahams as they find the strength within to see the race to its end. 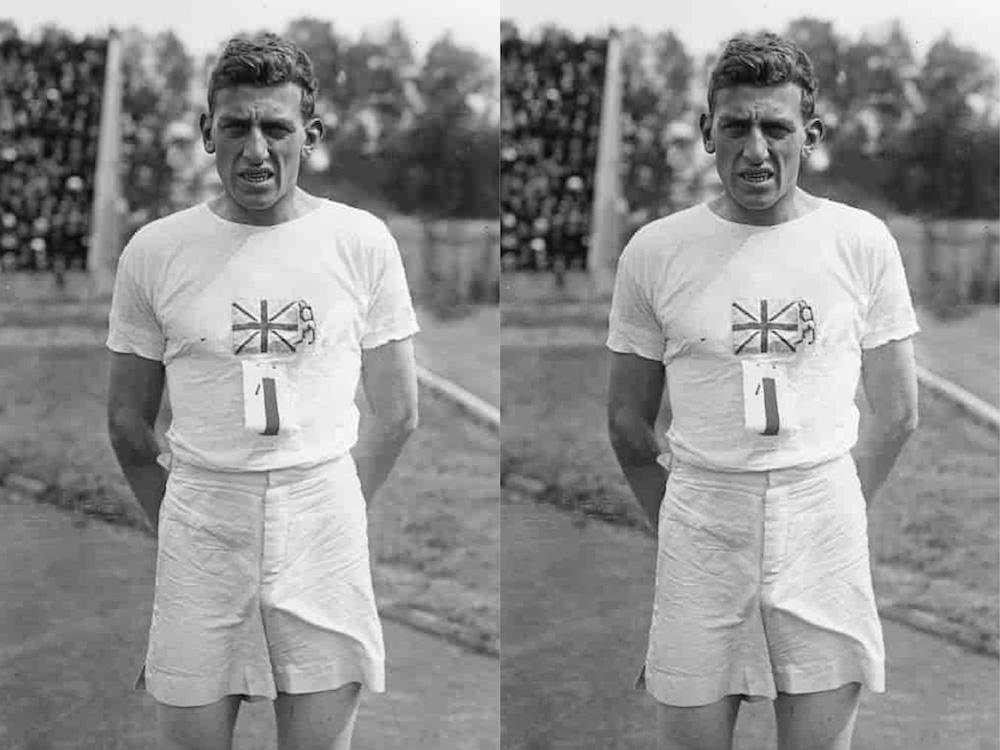